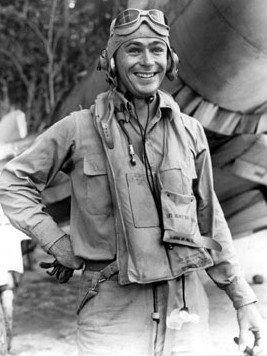 John Bolt was the only Marine to become an ace in WWII and Korea. In WWII, he flew with 'The Black Sheep', VMF-214, best known for its CO, Pappy Boyington.

Bolt shot down 6 Japanese planes in the Solomons and an equal number of Soviet MiGs in Korea ten years later.

During his time with the Black Sheep, he earned an admiral's praise for a "one man war on Japanese shipping" and shot down six Japanese planes.

John F. Bolt, Jr. was born May 19, 1921, in Laurens, South Carolina. His family moved to Florida, where he attended university. He enlisted in the U.S. Marine Corps late in 1941, and trained at Pensacola and Opa-Locka, winning his wings in August, 1942. He spent several months as an instructor, a 'plowback', as they called newly commissioned pilots who were sent back to train more neophytes.

By June, 1943, he had left the United States, and was cooling his heels in the pilot 'replacement pool' at Turtle Bay, on beautiful Espiritu Santo. At Turtle Bay, he and his buddy Bob Bragdon enjoyed collecting wild foods for the squadron. They dynamited a stream for tuna, shot young pigeons, organized a wild pig hunt, and learned to collect coconuts at their edible stage.

In his first real combat, the big fight over Kahili on Sept. 16, he froze up. When he saw the big red 'meatballs' on the Japanese planes and saw them coming right at him, he was in a state of shock. But he learned quickly. A week later, maneuvering through the clouds, he emerged to find himself behind half a dozen Zeros. Before they knew what hit them, he had flamed two. Shooting at a third, only two of his guns fired, and he broke off the fight.

On the 16th of October, toward the end of the first tour, five Black Sheep divisions (20 planes) took off in the morning, three to escort some SBD's on a strike against Kara airfield, the other two on a fighter sweep. Bolt flew with the fighter sweep, which Pappy Boyington was leading. As they flew over Kahili's Tonolei Harbor, they saw that it was filled with Japanese barges. "Nobody shoot" ordered the normally aggressive Boyington, who led the eight Corsairs on a long, erratic route.

While Boyington proceeded back to Munda, Bolt and the rest could only make Vella Lavella. At Vella, Bolt decided to fly back to Tonolei Harbor himself, to shoot up those barges. "The skipper will be pissed," a pilot warned. Bolt went anyway, and at Tonolei, he blasted one barge full of troops, an empty barge, a tug, and another small cargo vessel. Most of the vessels, he left burning and sinking. Back at Munda, Boyington was indeed "pissed".

But Admiral Halsey was more supportive:

As Bolt described it in The Black Sheep: "Boyington never cottoned to me much after that."

Bolt was convinced that their ammunition wasn't as effective as it could be; he thought that more incendiary rounds would be more destructive. The standard belting of .50 caliber rounds in the machine guns was 1-1-1, i.e. one tracer, one incendiary, one armor-piercing. Having observed that most kills resulted from 'flaming' the lightly-built and combustible Japanese aircraft, Bolt went to the boneyard, and tested the different rounds. Shooting at junked airplanes, 55-gallon drums, and other targets, he satisfied himself that a belting of mostly incendiaries with a few tracers would be most effective. In the Black Sheep's second tour, his modifications caught on, and then other squadrons adopted them. In a couple months there was a shortage of incendiary rounds in the Pacific Theater (promptly remedied).

He shot down a couple more Zekes on the Dec. 23 raid against Rabaul. He opened his part of the aerial battle with a diving pass at a formation of 8 planes; he damaged one on the wing, but couldn't confirm anything more. He blew right through their level. Coming back up, he gave chase to another, when a phosphorus bomb blew up right near him. Despite the explosion, he caught the Zero in a right turn, scoring hits on its engine cowl. From 8,000 feet up, he watched the plane settle into long shallow dive, crashing into New Ireland below.

With 6 kills in the Korea War, flying F-86 Sabre jets, Bolt was one of just seven Americans to become an ace in both wars, and the only naval aviator to achieve that distinction.

Bolt stayed on active duty with the Marine Corps after V-J Day. Even before the war in Korea started, he had accumulated a lot of hours in the F-86, which proved helpful later on. When he first arrived in Korea in mid-1952, he flew ground attack in F9F Panther jets for VMF-115. He approached Lt. Col. George Ruddell (USAF) commander of the 39th FIS and an old friend, and got checked out in F-86s. The future top ace, Joseph McConnell, taught Bolt a lot in these familiarization flights. His demonstrated initiative, plus his prior F-86 experience, gave Bolt an edge when the USAF had a couple openings for Marines in their exchange program.

His first jet kill came on May 16, after a long and frustrating dry spell. Determined to get a kill, he closed in on his target, even though other MiGs were after him. The MiG scissored violently, but couldn't shake Bolt's gunfire; Bolt guessed that he put "500 rounds into that guy." His gun camera footage recorded lots of indendiary hits. The ground rules for granting a confirmed 'kill' assumed that a MiG would be destroyed if it were hit seven times. As every third round was an incendiary, if the gun camera footage showed three incendiary hits, the intelligence officers would confirm an aerial victory. (Given these ground rules, perhaps it is not surprising that the U.S. claimed 800 MiGs destroyed, while newly released Soviet records admitted only 345 MiGs lost.)

(The following incident is described in Aces at War: American Aces Speak, Vol 4, by Eric Hammel.)

While his mentor, George Ruddell, had scored the five kills needed to qualify as an ace, by June of 1953, there were no more MiGs to be had, at least not south of the Yalu. One night over a few drinks, Ruddell tearfully confided to Bolt his determination to get another MiG, even if it meant risking his Air Force career by flying north of the Yalu. As Squadron CO, Ruddell had 'toed the line' with regard to trans-Yalu adventures. He had threatened his pilots with dire consequences, and now he was reluctant to approach them with his own 'MiG fever'. Bolt arranged to fly 'up north' with Ruddell the next day, June 30.

Half the battle was concealing their trespassing from the USAF air controllers. From their four-plane flight, only Bolt and Ruddell went across the Yalu. When one radioed "Twin," the other replied "Cities," then they switched from the combat frequency to the training frequency, and Ruddell turned off his IFF. These two went across, while the other two stayed south, and presented a radar image and an IFF signal to the controllers, presumably four planes. The junior pilots had worked out these procedures themselves, before their CO, Ruddell, asked to get in on the act. At 44,000 feet above Manchuria, they spotted a MiG and dove after it. While Ruddell was behind it, he didn't shoot. Finally, Bolt swept into range, and downed the Russian jet. He kept his defroster on max, whatever the discomfort, a trick he had picked up in the steep, extended dives that the errant pilots did north of the river.

Back at the base, Ruddell took a lot of ribbing: "Marine steals Colonel's MiG." It was Bolt's 4th.

He scored his last two MiG kills on July 11. He and his wingman, 1st. Lt. Jerry Carlile, were near the Yalu, at about 20,000 when they found two MiGs down on the deck. Bolt knew it would be easy, and it was. He and Jerry were a little too close, and had to stay out of each other's gunfire, but that was it. Bolt's gun camera footage showed two clear kills. He had downed 6 jets in Korea.

After Korea, he went home to Florida, finished college, completed law school, and practiced law for many years. In Nov. 2000, he attended a WW2 Black Sheep reunion in Abita Springs, CA.