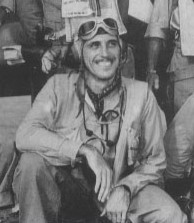 In later years, Chris Magee's wartime reputation built him up into a wild man, a bearded, bandana-wearing, grenade-tossing eccentric. The stories have some basis in fact, but actually Magee was a fine pilot, the second-highest scoring VMF-214 ace, credited with downing nine Japanese planes, and winner of the Navy Cross.

The grenade-throwing legends originated one day in September, 1943 when the Black Sheep flew a barge-busting mission. Over Choiseul, they found a 70-foot junk. As the Corsairs swarmed over it, Magee pulled out his unauthorized grenade.

He struggled mightily to pull the pin, almost breaking his teeth, eventually freeing it on the second pass. He tossed it overboard, and it somehow landed on the junk. The grenade exploded as the Corsairs raked the junk with .50 caliber machine gun fire. They left it burning and headed home. Trying to land, Magee earned his nickname "Wild Man" when he calmly brought his Corsair in for a dead-stick landing, blowing down his wheels with the emergency CO2 bottle just over the runway. Hours later, he was back in the air, on another combat mission.

First Lieutenant Christopher L. Magee grew up in Chicago, Illinois. When the war broke out in 1939, he wanted to sign up as soon as he could, even though the United States was not yet involved. (Magee's cousin, John Magee, was also an RCAF pilot, and wrote the famous poem "High Flight" shortly before being shot down over the English Channel.) In his first try, he enlisted in the USAAF's flying cadet program. After a few months, and with 25 hours flying time in his log book, he went north in mid-1941 to join the RCAF. Training dragged on through the end of the year, and into early 1942. By now, the U.S. was at war, and recruiters scoured the RCAF camps for volunteers. With a promise of an early combat flying assignment with the Marines, they got Chris to return to American service. From July through November, 1942, he continued training, flying the ubiquitous North American Harvard trainer. After receiving his wings of gold in November, he joined the U.S. Marine Corps, flying F4F Wildcats for them in Jacksonville, Florida. Finally, on June 5, 1943, Magee boarded the Rochambeau, a French liner converted to a troopship, for the journey to the South Pacific.

First assigned to VMF-124, in July and August, he familiarized himself with the F4U Corsair, then the hottest fighter plane in theater.

With the Black Sheep

In early September, he joined the newly-reorganized VMF-214, soon to be dubbed The Black Sheep, commanded by the legendary Greg Boyington. Chris missed out on their first combat mission, but two days later, on Sept. 16, he found all the aerial fighting he could have wished for. In the melee, the Black Sheep tallied eleven confirmed kills; Chris got a probable. On the 17th, they moved up to that most disagreeable of bases, Munda, still reeking of unburied Japanese bodies.

He got a late start for the CAP; the Corsairs were assigned to cover naval forces involved in a landing on Vila. Flying at 13,000 feet, Magee spotted about 30 Vals heading for our ships. The dive bombers were below him, and he used his altitude advantage to shoot one down. He chased the others into the ships' anti-aircraft fire and down onto the deck. He cut one out of the pack, and "blew it to pieces." Intent on the Vals, he didn't see the Zeroes that swooped down on him, their bullets riddling his Corsair and smacking into his armored headrest. He escaped by flying closer into the AA fire, which the Japanese fighters avoided. When the day was done, he had two confirmed aerial victories, thirty bullet holes in his airplane, and one recommendation for a Navy Cross.

It was the last time (until their last day of combat) that the Black Sheep shot down a Val dive bomber; all their later battles were against fighters.

Chris didn't do too much flying until Oct. 17, when he shot down two more Zeros, and then three the next day.

During the second tour, he scored on Dec. 23, a day when wild maneuvers at high altitudes combined with an intermittent oxygen system to disorient him with hypoxia. Ed Heier flew by, and signalled to 'join up', but Magee was too confused to respond. He descended to a lower, oxygen-rich level and recovered. His last kill came on December 28.

Not long after Pappy Boyington was lost, VMF-214, the Black Sheep squadron, was broken up. Chris, Bob McClurg, Jim Hill, and several other Black Sheep joined VMF-211, stationed on Green Island. There wasn't much Japanese aerial opposition left, and none of the pilots engaged enemy aircraft during the six-week tour. About the most exciting thing that happened to Chris was when he saved Jim Hill from the incoming tide.

Returning stateside, Chris was assigned to the Cherry Point NAS in North Carolina, where he met Molly Cleary, whom he soon married. His unit, VMF-911, flew Grumman F7F Tigercats, powerful twin-engined fighters that didn't see any action in WWII. Soon after the war ended, Magee joined many of the other Black Sheep for a raucous welcoming party for Greg Boyington, held in San Francisco's St. Francis Hotel.

When he was released from service in Oct. 1945, he returned to Chicago with his young family. He briefly went into bootlegging with his boyhood friend, Ed Smart. The next year they got involved with a group of "businessmen," and acted as couriers to Latin America.

In May 1948, he answered an ad for fighter pilots, placed by the Israeli Haganah (defense forces). His wife Molly, now caring for two youngsters, was cool to the plan, but did not object. After an indirect trip through Europe, Chris and the other pilots joined Israel's 101st Fighter Squadron, "The Angels of Death." They flew Avia S-199's, a Czech-built version of the Messerschmitt. (Check out Rudy Augarten's story. Link can be slow-loading.) The planes were not very good: underpowered, with poorly synchronized machine guns, and with poor landing characteristics. Chris never encountered an enemy plane, nor had the opportunity to fire his guns. The entire scene was not what he had expected, so in Oct. 1948, he left Israel, and returned to the States, He found that Molly had divorced him, taken their two young children, and moved away. He never saw her again.

In the early 1950s, Chris worked again as a courier for the shadowy organization that had employed him earlier. In 1955, he hit rock bottom, robbing a bank. In early 1957, he pulled another bank heist. He was ultimately convicted of robbing a third bank as well, sentenced to fifteen years, and entered Leavenworth Prison in 1959.

After his early release in 1967, he lived quietly, almost anonymously, in the Chicago area. When Frank Walton looked up all the Black Sheep in 1976, Chris replied in a moving and poetic letter. Then, Chris disappeared again and did not attend any Black Sheep reunions for many years.