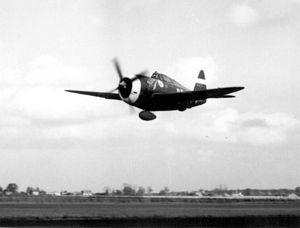 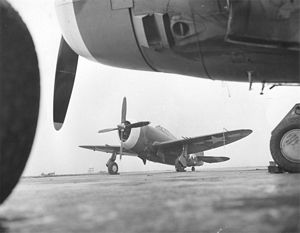 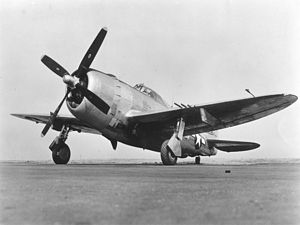 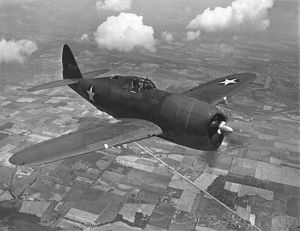 "It better dive, because it sure as Hell can't climb." Don Blakeslee

Robert S. Johnson and the P-47

When Robert S. Johnson first saw a Thunderbolt, it was love at first sight. The P-47B was a giant with a 2,000 horsepower engine; not very pretty on the ground, but every inch a powerful machine, rugged and sturdy with all the mass of a tank. He scrutinized the tremendous four-bladed propeller. In each wing rested four 50 caliber machine guns, giving the Thunderbolt the ability to throw 7,200 rounds of lead per minute!

He had a chance to check out the P-47 at Bradley Field:

I hit the starter switch. Deep inside her belly the Thunderbolt groaned, a straining rumble sounding for all the world like a giant dynamo coming alive. Ahead of me the four propeller blades turned slowly, then began to move faster as the Pratt & Whitney gained in power. The rumble increased in pitch, the blades became a blur. Suddenly the cranking and rumbling vanished, to be replaced by a tremendous, throaty roar, a bass of power such as I'd never heard. I cracked the throttle forward a fraction of an inch and the fighter sang of power, a symphony of thunder, alive and ready to howl at the slightest movement of my fingers.

He took the plane up, nearly killing himself when the heavy canopy bar slid back and smashed his head. But he got the ship in the air and it howled its way up into the sky. He soon learned that "unless we plunged nose first into the ground, we couldn't hurt the Thunderbolt". It could take the stress of any aerobatic maneuver. The pilots of the 56th Fighter Group grew to trust the fighter, knowing they could subject it to any demands of aerial combat.

After he arrived in England in early 1943, he saw his first Spitfire and compared it to the Thunderbolt. The differences were amazing. The P-47 was a giant, massive weapon; the English fighter was lithe and rapid, with the agility to dart in and out of battle. The RAF pilots warned the Americans that their huge Thunderbolts would be sitting ducks against the Messerschmitts and Focke Wulfs. They were wrong. The tough Thunderbolts more than held their own against the Luftwaffe.

One day in late June, 1943, Johnson's Thunderbolt was hit early in the mission and then helplessly subjected to an Fw 190's machine gun fire on the way home. You read about this famous story in the Robert S. Johnson article on this site. Somehow, incredibly, the P-47 absorbed this battering from the German guns and made it back. After the injured Johnson had landed his plane at the Manston emergency strip, he surveyed the damage it had taken, and later described the result in his autobiography, Thunderbolt!:

There are twenty-one gaping holes and jagged tears in the metal from exploding 20mm cannon shells. I'm still standing in one place when my count of bullet holes reaches past a hundred; there's no use even trying to add them all. The Thunderbolt is literally a sieve, holes through the wings, fuselage and tail. Every square foot, it seems is covered with holes. There are five holes in the propeller. Three 20mm cannon shells burst against the armor plate, a scant inch away from my head. Five cannon shell holes in the right wing; four in the left wing. Two cannnon shells blasted away the lower half of my rudder. One shell exploded in the cockpit, next to my left hand; this is the blast that ripped away the flap handle. More holes appeared along the fuselage and in the tail. Behind the cockpit, the metal is twisted and curled; this had jammed the canopy, trapping me inside.

The airplane had done her best. Needless to say, she would never fly again.

Johnson had great success with the Thunderbolt, shooting down 27 German planes over Europe while flying the rugged fighters.

Here are the some of the highest scoring P-47 aces of the ETO.