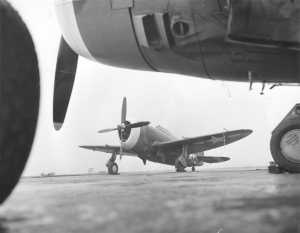 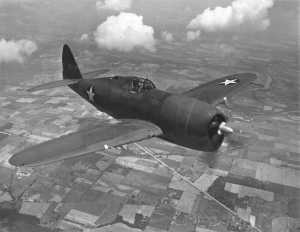 Commanding Officer of the 56th Fighter Group, Senior Allied Officer at Stalag Luft I, and a great leader of men:

Hub Zemke was one of the greatest Fighter Group CO's of the ETO, along with his counterpart at the 4th FG, Don Blakeslee. Zemke's 56th Fighter Group, the "Wolfpack," was credited with 665 aerial victories, leading all fighter groups in the ETO. Zemke himself had 17.75 confirmed victories in 154 combat missions.

Hub Zemke spent the first part of the war on liaison missions to Russia and England before taking over as CO of the 56th Fighter Group in September 1942. He was a Major at this time. The group was still familiarizing itself with the P-47 at Bradley Field and Bridgeport, Connecticut. In January, 1943, they sailed to Europe on the Queen Elizabeth, converted from a luxury liner to a troop transport for 12,000 men.

As both CO and pilot, Zemke had the dual responsibility for getting the best qualified men to help lead the 56th and for insuring that the group ran efficiently on the ground and in the air. The large organization of clerks, cooks, armorers, pilots, and mechanics kept him in his office whenever he wasn't flying. He was open to new ideas that might help protect the bombers. But he also had to remind the "lone wolf" pilots that they were part of a team, and that they all had to fight as a cohesive units.

The early missions of the 56th were difficult, and they took some serious losses, while learning the ways of aerial combat against the experten of the Luftwaffe. In mid-May, 1943, he led a bomber escort over Antwerp. He called for the 48 Thunderbolts of the three squadrons to form a battle line as they moved out over the Channel at 31,000 feet. Soon they mixed it up with the FW-190s from Abbeville, and in the dogfight Robert Johnson got separated from the rest of the Group; Zemke chewed him out for not staying in formation. Hub's first aerial victories came on June 13, 1943, when he shot down two FW-190s over Cassel while flying a P-47 marked "MOY TOVARISH," which markings he later had removed. On June 26, the Group lost four pilots and six planes (including the one that Robert Johnson struggled home in), while Hub Zemke talked Ralph Johnson down as he tried to land at Horsham St. Faith. As Ralph's landing gear was stuck with only one wheel down, and the other could not be shaken down, Hub advised him to fly back out over the Channel and bail out. He watched Ralph go into the sea, and then guided a rescue plane back to recover him safely.

In July, the 56th moved from the relative comfort of Horsham St. Faith to Halesworth, near Ipswich. The new field was muddy and their quonset huts cold and dreary. Zemke scored his third kill on August 17. He made ace on October 2 and downed an FW-190 on the 20th. The whole Group really began to overwhelm the Germans in October, claiming 39 kills while only losing one! He claimed another FW-190 on Nov. 5. Then he took a short leave from the 56th FG until January, 1944. On March 6, 1944, Zemke led the 56th on the first bomber escort mission over Berlin itself; now equipped with belly tanks, the P-47 could cover the bombers the whole way. Over the Dummer Lake area, he shot down an FW-190 and a Bf-109, also getting a quarter share on another Messerschmitt. While the U.S. fighter pilots scored a lot of kills, the German fliers inflicted terrible, unsustainable losses on the bombers, knocking down 68 of them. He scored five more kills while with the 56th, through August, 1944.

He developed the Zemke Fan and helped to persuade the 8AF generals to let fighters roam more freely around the bomber formations, rather than keeping them in close. During these months of mid-1944, the competition between Zemke's Thunderbolt-equipped 56th FG and Blakeslee's Mustang-equipped 4th FG became very intense and well-publicized. By the end of the war, the 4th FG had the most kills (including ground), but the 56th retained the edge in aerial kills.

In August 1944, Zemke took over the 479th Fighter Group, equipped with P-38 Lightnings but converting to P-51 Mustangs. The 479th's record had not been good. Zemke soon restored the group's morale while earning three more victories himself, including one of the first Allied shoot-downs of an Me-262 jet. He and his wingman attacked what they thought was a Bf-109, which they shot up and saw go down. Only when the gun camera footage was developed did they learn that they had downed a jet.

In October 1944 on a mission over Germany, his P-51 lost a wing. Parachuting from the wreckage, Zemke was soon taken prisoner and ended up in Stalag Luft I at Barth, Germany, on the Baltic Sea. Colonel Zemke found himself Senior Allied Officer, responsible for 7,000 Allied prisoners. Zemke provided excellent leadership to the POWs in the camp and took charge of the difficult transfer of authority at Stalag Luft I when Germany surrendered.

"He was an extraordinary man, outspoken, courageous, and of unflagging personal integrity and conviction. These qualities, which made him one of our greatest wartime leaders, did not endear him to some of his military superiors and probably denied him the rank and responsibilities he deserved. Nevertheless, he will remain a symbol of military excellence long after others are forgotten."