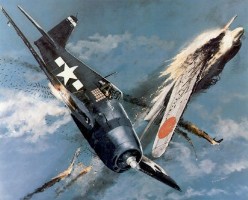 The highly successful follow-on to the Wildcat. Built specifically to counter the Japanese Zero, the Hellcat filled the bill, and earned the nickname "ace maker." Its docile handling characteristics, especially important for a carrier-based plane to be used by a large number of reasonably well-trained pilots, made it the Navy's first choice fighter to deploy with the Essex-class carriers.

In the critical years 1943 and 1944, the Hellcat ruled the skies of the Western Pacific.

Eugene Valencia, one of the Navy's top aces, quipped. "I love this airplane so much, that if it could cook, I'd marry it."

Although the F6F had been on the drawing boards at Grumman, even before Pearl Harbor, the advent of the war gave great impetus to the development of the replacement for the Wildcat. From the start it was a much bigger airplane. Leroy Grumman, and his two top engineers, Leon Swirbul and Bill Schwendler, laid out a plane with higher performance, more fuel & ammunition, and huge wings. The wings extended over 334 square feet; the average was less than 250 sq. ft.. The wings folded back and pivoted ingeniously, so that they folded up next to and alongside the fuselage.

The first prototype, the XF6F-1, was under development when the war started. Based on combat experience against the Zero and the intact A6M captured in the Aleutians, it was clear that speed and better climb would be needed from the Hellcat. Test pilot Robert L. Hall first flew the XF6F-1 in late June, 1942. Powered by a Wright Cyclone R-2600-16 engine (1,600 horsepower), the aircraft didn't have the needed performance. Grumman proposed the Pratt & Whitney 2800 Double Wasp (2,000 horsepower). Equipped with the P&W 2800, the original prototype airframe became the XF6F-3. A month later, Bob Hall flew the new configuration. Despite a crash of the XF6F-3 in August, the Navy placed an order.

Grumman had to build a new facility, Plant Number 3, to produce the Hellcat. Obtaining the structural steel for the buildings was a challenge, met in part by the purchase of scrap from the Second Avenue El. Even before Plant Number 3 was finished, Hellcats began rolling off the production lines. Another Grumman test pilot, Selden "Connie" Converse took up a production F6F-3 for the first time on October 3, 1942. Grumman's Hellcat output picked up quickly: 12 planes in the last quarter of 1942, 128 in the first quarter of 1943, and then 130 in the month of April, 1943. Eventually they would be churning out 500 per month. The company built over 12,000 in three years.

During "The War," Grumman was an outstanding example of American productivity, employing 20,000 workers, few of whom had ever worked in the aircraft industry before; many of them were women. Bethpage was a happy place; there were no strikes, work stoppages, nor unions. Grumman took care of its employees with daycare centers for working mothers, social events for all, Christmas turkeys, and the famous "Green Car Service" to help employees with dead batteries and other minor problems.

Especially with the delays in the F4U program, the US Navy needed a superior carrier-based fighter in 1942-43. The Hellcat filled the bill. On average, it flew 55 MPH faster than the Zero; at about 20,000 feet it was 70 MPH faster. At altitudes in excess of 10,000 feet, it had a comparable rate of climb. At all altitudes, due to its heavier weight and greater power, it could out-dive the A6M. (This was generally true of American fighters; in a tough spot, the pilots could nose over, firewall the throttle, and zoom down.)

The 'dash Five' closely resembled the 'dash Three.' It had some extra armor, stronger main gear legs, spring tabs on the ailerons (for better maneuverability), and most of them had water-injection engines (the R-2800-10W). Both versions had 250 gallons capacity in internal tanks and a 150 gallon belly drop-tank.

Its armament, power, and range gave the Hellcat great versatility. The basic weaponry consisted of six wing-mounted .50 caliber machine guns, each with 400 rounds of ammunition. Many, including all F6F-5N and F6F-5P variants substituted a 20mm cannon with 200 rounds for the innermost machine gun in each wing. The Hellcat could carry a up two 1,000 pound bombs. Its most destructive weapons were six 5-inch HVAR's (High Velocity Aircraft Rockets), which the author Barrett Tillman described as "equal to a destroyer's broadside."

Fighting Squadron Nine (VF-9) took delivery of the first Hellcats in January, 1943. As they were flying from the Long Island factory to their Norfolk base, one crashed near Cape May, New Jersey. VF-6, commanded by Butch O'Hare, also received early deliveries of the F6F.

The Hellcat's first combat mission occurred on August 31, 1943, in a strike against Marcus Island, including Cdr. Charles Crommelin's VF-5, Lt. Cdr. Phil Torrey's VF-9, and a detachment of O'Hare's VF-6. The early-morning raiders destroyed eight twin-engine bombers on the ground; while losing two Hellcats to anti-aircraft fire and one to engine trouble. The next day, over Howland and Bakers Islands, Lt.(jg) Dick Loesch and Ens. A.W. Nyquist scored the Hellcat's first aerial victory when they teamed up to shoot down a Kawanishi H8K "Emily" flying boat.

Large-scale carrier operations began in October, with a attack on Wake. When four carriers struck Wake Island on October 5-6, the Hellcats saw their first significant aerial combat. Half an hour before dawn on the 5th, each of the four carriers launched three fighter divisions, 47 Hellcats in all. When they were still 50 miles out from Wake, the Japanese radar detected them, and 27 Zeros intercepted. In the ensuing dogfight, Fighting Nine's skipper, Phil Torrey, shot down one Zero, then evaded two more by dodging in and out of clouds. Lt. Hadden, while watching a shared kill fall into the ocean, was jumped by two Zeros, and was lucky enough to make it back to Essex with most of his engine oil emptied out through several 20mm holes. Lt. (jg) Hamilton McWhorter dove into a gaggle of Zeros, when one serendipitously appeared in his gunsight. He fired a short burst and exploded the Zero - his first aerial victory.

In early November, the U.S. forces attacked the large Japanese base at Rabaul, and again the Hellcats overmatched the Zeros.

The Navy saw the need for night fighters and started the Project Affirm program in early 1942, originally with Corsairs equipped with primitive AI (Air Interception) radar sets built by MIT engineers. In 1943, the Hellcat emerged as the preferred night fighter because of its easier landing characteristics and greater stability as a gun platform. The F6F-3E, converted in the field at MCAS Quonset Point, was the first Hellcat night fighter, using the AI radar, red cockpit lighting (to preserve the pilot's night vision), and without an easily scratched Plexiglass windscreen fairing. Eighteen F6F-3E's were built. (On November 26, 1943, Butch O'Hare, flying an unmodified F6F-3 on a night mission with a TBF Avenger, disappeared over the Gilberts. One of the best books I have read about the Pacific War, Crossing the Line, by Alvin Kernan - who was the gunner on the Avenger that night - deals with this event in detail.)

Next came the F6F-3N, 205 of these built by the Grumman factory. The F6F-3N employed an improved radar, the APS-6. Installed in a bulbous pod on the starboard wing, the APS-6 was simple to operate (only six knobs), had a range of five miles, and weighed 250 pounds. It featured a double-dot system that displayed a shadow blip to the right of the true blip; this secondary blip showed the target's altitude relative to the F6F. The -3E's and -3N's deployed to the carriers in the Pacific in early 1944, but were difficult to integrate into carrier operations, as they essentially would have required round-the-clock duty by launch and recovery crews. Nonetheless, three Hellcat-equipped night squadrons (VF(N)-76, VF(N)-77, and VF(N)-78) served in the Pacific in 1944.

The F6F-5N was the definitive night-fighting version of the Hellcat, over 1500 of these built by Grumman.

Hellcats flew with the French Aeronavale in the Indochina war of the early 1950's.

As late as 1980, sixteen Hellcats survived (including some in private hands). More recently, there are at least ten Hellcats at the following museums:

Recommended Reading (available from Amazon.com): Hellcat Aces of World War 2. My copy is well-worn, from reading the experiences of many of the following aces, and admiring the beautifully precise color profile of the airplanes.