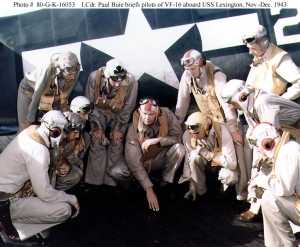 Pilots of VF-15 on USS Essex

Few aspects of naval aviation are more confusing than the U.S. Navy's squadron designations. The Navy changes them all the time, from World War Two to the present. Following is a table that presents a selection of the high-scoring WW2 squadrons. Actually, each row of the table shows one squadron during one deployment.

One of the key American strengths during WWII's air war was the excellent training and depth of our combat pilots. By policy, naval pilots served in combat for a finite tour (e.g. 250 combat hours, or six months, or 25 missions, or whatever). Then they rotated back stateside, typically to train other pilots.

Each Navy squadron would usually serve in combat for several months, usually from one carrier or land base, and usually under one commanding officer (CO). This time was called a "cruise," a "deployment," or a "combat tour." Each row in the table corresponds to one of these deployments.

It got confusing when the Navy would then organize another squadron under the same designation, with new fliers and a new CO, and frequently with a new aircraft. So VF-8 flying Wildcats from Hornet in 1942 had little connection with VF-8 in 1944 on Bunker Hill flying Hellcats. "VF" meant "Heavier-than-air Fighting Squadron," nomenclature that arose when the Navy also flew dirigibles.

By far, the highest scoring squadron was VF-15, with 310 confirmed aerial kills. They had skilled fliers (McCampbell, Rushing, Rigg, Strane, Twelves, et al) and they flew off Essex during some the great aerial fights of 1944 - the Marianas Turkey Shoot of June 19, the Formosa strikes of September, and the Leyte Gulf battles of late October.)

All of the information in this table was summarized from Barrett Tillman's excellent U.S. Navy Fighter Squadrons in World War II. Any errors or over-simplifications are my mistakes, not the author's.

If you've read this far in this website, this book is for you. Most of the book consists of short summaries of the USN fighting squadrons that saw combat in WWII. (It unravels the tangled mess of squadron designations, re-designations, and deployments.) Each squadron history includes its deployments, CO's, and top scorer.