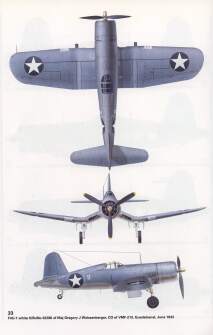 Originally designed as a carrier-based fighter, the Corsair's difficult handling and landing characteristics caused the Navy to rely on the Grumman Hellcat instead. The Marine Corps benefited from this policy change, and its land-based units eagerly adopted the "Bent-wing Bird." The famous Jolly Rogers, the Navy's VF-17, also flew the Corsair during its tour in the Solomons. Late in the war, as the handling problems were resolved, both Marine and Navy pilots operated F4U's from carrier decks.

But its speed, firepower, maneuverability, and ruggedness cause many to rate it with the Mustang as the best fighter plane of World War Two.

Tommy Blackburn (CO of the Jolly Rogers) on the F4U Corsair:

The Corsair appeared to be a superb fighting machine, but it was overengineered and thus hard to maintain. At the start of a typical day's ops, only about half of our full complement was safe to fly. By "secure," half of those could be expected to be "down."

The 2,800-cubic-inch engine was a monster to fire up after it had sat in subfreezing weather overnight. First, it took two strong men pulling on a prop blade to slowly accomplish the minimum revolutions needed to clear the lower cylinders of oil so the start-up could be accomplished in safety. Next, the engine had to be primed with raw gasoline. This touchy enterprise had to stop short of flooding and thus drowning the spark plugs and evade the obvious fire hazard while getting enough vaporized fuel into the cylinders to get the engine to cough to life. Some genius had equipped the Corsair with a shotgun starter in lieu of the heavy electric starter. When all was in readiness, the shotgun shell was fired. Sometimes it went bang and turned the prop through three or more revolutions. Mostly, however, it just went poof and the prop just twitched. Four abortive tries generally overheated the starter, and that resulted in a fifteen-minute stand-down for cooling. So much for geniuses.

Each of fourteen cowl flaps had its own baby hydraulic cylinder to open and close it. These tended to leak. In addition, until the maintenance crews became expert, the big radial engine tended to throw a lot of oil. The combination rapidly coated the windshield and seriously decreased the airplane's inherently limited forward visibility. We all became expert at quickly locating rain showers through which we could fly in order to wash away the oil.

The landing flaps had a protective device to prevent extension at airspeeds high enough to cause over-stressing. This was a dandy feature except that the flaps could and often did retract fully and without warning during the final stages of a landing approach. Of course, this resulted in a horrendous loss of lift and a rapid sinking. The pilot, ever alert for such mishaps, had to slam on full power to evade disaster. After too many narrow escapes, we got the "flap blowup" removed, it being our decision to risk tearing off a flap as against losing lift in this terrifying, dangerous manner. To my knowledge, no one ever did tear off a flap.

The Corsair's storage battery, which was located in the cockpit, had an unhealthy habit of boiling over. In one case, a battery exploded while the airplane was in flight. We later determined that it had been excessively over- charged, but the incident gave us one more in a long line of potential life-threatening problems to bear in mind while we were trying to fly - and eventually, fight - our irasible Hogs.

quoted from The Jolly Rogers, by Tom Blackburn and Eric Hammel

The huge engine dictated much of the plane's design. Such a power plant needed a comparably big propeller to absorb all that horsepower. Thus the 13' 4" diameter Hamilton Standard prop, the largest fittest to a fighter at that time. The Corsair's fuselage had to be high in the air, to give the prop clearance, But ordinary, straight wings at that height would have implied long (and weak) landing gear. The distinctive bent wings were developed to permit a reasonably short undercarriage.

The XF4U first flew in May 1940, and in October flew faster than 400 MPH, a record for a production fighter. A major re-design pushed the cockpit back 32 inches, which resulted in poor forward vision for the pilot, at least on take-off and landing. Development continued into 1942, when Vought delivered the first production F4U-1 to the Navy, which didn't like what it saw, especially when compared to the easier-handling, and very capable F6F Hellcat. The F4U had dangerous stall behavior, had tendency to yaw suddenly when landing, and, worst off all, bounced when it hit the deck. For use on carriers, these problems caused the Navy to insist that they be fixed, while it went ahead equipping with the Hellcat. By the summer of 1943, most of the Marine fighting squadrons had transitioned to the F4U-1, the first operational model. Based on combat experience, Vought improved the next version, the F4U-1A:

The F4U Corsair went on through many different models. It saw service in Korea, where Guy Bordelon flew an F4U-5N to become the Navy's only prop ace of that war. The Corsair remained in production until 1952 (over 12,000 built), they served with many nations' air forces until the 1960's. Corsairs flew their last combat misions in the 1969 "Soccer War" between Honduras and El Salvador.

Quinn Elliot made these observations on the F2G variant:

Perhaps I missed it on the Corsair page - the most powerful Corsair ever built, the Goodyear built F2G with the Pratt & Whitney R-4360 corncob 28 cylinder engine (four rows of seven cylinders), contrasting with the P & W R-2800 18 cylinder engine in the normal Corsair. Fifteen of these were built, five being the F2G-1 beginning with bureau number 88454. These five were land lubbers, although the wings could be folded manually. The remaining 10 were fully carrierized and were F2G-2's.

I took photos of BuNo 88454 about 1970. It had been preserved at NAS Norfolk and stored by O & R/NARF. It was in beautiful condition-until a ranking Naval Officer wangled it away from the Navy, for racing, or so the story went. That plan went afoul, and it wound up derelict at Newport News. (As I recall Corsair F2G-1 88454 is/was in the Champlain Fighter Museum in Mesa, Arizona. Cook Cleland raced these super Corsairs in the late 1940's?)

F2G-2 specifications which should be about the same as the F2G-1=399 MPH at sea level, 431 mph at 16,405 feet, initial climb rate 4,400 feet per minute, internal fuel range 1,190 miles, empty weight 10,249 pounds, gross weight 13,346 pounds, span 41 feet, length, 33 feet 9 inches, height 16 feet 1 inch, wing area 314 sq. ft. The max speed performance was very close at sea level, but at altitude quite a difference. The Super Corsair had a bubble type canopy, different cowling to cover the longer engine, thus it had a longer snout. It had smaller wing root inlets than the standard Corsair. Since it wasn't equipped with a supercharger, intercoolers weren't necessary. The F2G's came with a taller fin and rudder, with a straight section auxiliary rudder just below the normal rudder, which moved only to the right by 12 plus degrees-as an aid for torque correction whilst landing on aircraft carriers.

Check out the story behind Pappy Boyington's Corsair.

Osprey's Corsair Aces is another book that I've worn out, with its chapters on the Black Sheep and British Corsairs especially engrossing. As always, Mark Styling's color profiles do not disappoint.