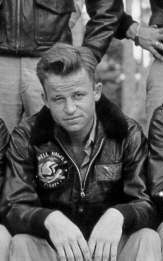 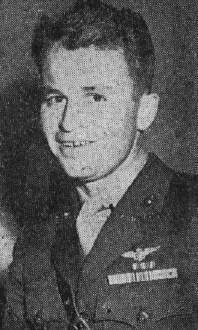 Edward "Bud" Shaw, USMC, shot down 13 Japanese planes in the Pacific. His family, like many servicemen's families, collected press clippings about their brave young man and wrote about his exploits in letters. The following press clippings were kindly sent to me by Jon Pickens, Shaw's nephew. My thanks also to Barbara, Edward's sister, who preserved the clippings, and to Jon's wife, Pamela, who "kept the ball rolling on this project."

I have included the newspaper articles on this web site, both to honor Shaw himself, and also to provide a little "sense of the era," by reproducing the them as close as possible. I've preserved the original capitalization (or lack of capitalization, as in "marine corps") and also the articles themselves, even though the bit about sleeping with .45's to protect their single eggs seems to be a bit of a "stretcher." The articles and one photo also refer to Wilbur J. Thomas, the top ace of VMF-213, with 16.5 aerial victories. (A close reader will notice that some articles refer to Shaw as "the marine corps first ace." That's a mistake; Marion Carl was the first Marine Corps ace. Possibly the writer meant that Shaw was the first pilot of VMF-213 to reach ace status, of perhaps the first ace from the Spokane area.)

The editorial from the Spokane Daily Chronicle is particularly touching and evocative of the spirit of that age, which like Shaw himself, apparently has passed on.

He flew as a test pilot at the Marine Corps base in the Mojave Desert (El Centro, I presume). The wartime articles imply he was flying Corsairs. He couldn't pull out of a dive, crashed, and died - aged 23.