Hawks in Hall of Fame of the Air 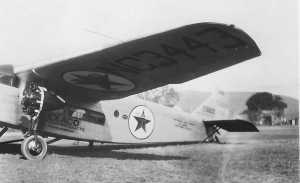 Frank Hawks was one of the aviation legends of the golden era of flight. He set speed records and demonstrated new techniques. Through his association with Texaco, he also contributed to the commercialization of aviation

Once a flight instructor at Love Field in 1917 and a captain in the fledgling Air Service, after the Great War, he made his living as a barnstorming pilot, and demonstrated the first in-flight refueling as early as 1921.

In 1927, the Texas Oil Company (Texaco) organized its own Aviation Department to market aviation products. The division soon ordered its first plane, "Texaco One", a custom built Ford Trimotor (NC3443), delivered in February, 1928. Texaco hired Frank Hawks to advertise the company across the country. He embarked on the tour which he described, in his autobiography "Speed", "In the course [of the tour]. I visited 175 cities, carried 7,200 passengers, and did 56,000 miles of cross-country flying. All of this without a mishap to plane and passengers."

The Trimotor was destroyed in a crash at Floresville, Florida, in December, 1928. Texaco bought a Lockheed Vega, known as "Texaco Five." In February 1929, Hawks flew it from the Burbank factory to New York in 18 hours 22 minutes, a new transcontinental record. Four month later, Hawks and Texaco Five bested their own record by 43 minutes. It flew some 90,000 miles before being lost in a January 1930 accident in West Palm Beach, Florida.

Captain Hawks in 1929 established a record round-trip flight between New York and California. in 1929 he set a transcontinental speed record of 18 hours and 21 minutes...

He made the first transcontinental glider flight in 1930. he also piloted a towed glider for 2860 miles across the US...

Frank Hawks had recently become interested in gliding when he saw a Franklin glider, "9491," perform at the Detroit Glider Carnival in 1929. When "9491" was still impressing crowds around the country, its designers, R.E. and Wallace Franklin, had begun building an improved model. They offered it to Hawks, who oversaw its completion. Hawks' employer, Texaco, endorsed Hawks' gliding activities because they thought the sport would attract people to aviation. Company officials believed that glider pilots would eventually move to flying powered aircraft fueled and oiled by Texas Company products. Hawks purchased the glider using company funds.

Before the new Franklin glider was completed, Hawks and Texaco had devised a spectacular stunt to stoke public interest in both motorless and powered flight. Hawks planned to fly the glider coast to coast, in tow behind a Waco Ten biplane. During the flight, the glider would land frequently, and at every airfield, Hawks would meet with reporters.

Construction of the new glider. The fuselage was framed by three steel tubes, welded and riveted at both ends. A brake was added to the main wheel. The wings were of fabric-covered wood, both removable for transport. The basic instrument panel consisted of an airspeed indicator, altimeter, and slip/skid indicator. The completely enclosed cockpit included a radio and a telephone. A stylized eagle and the Texaco logos decorated the craft. Hawks christened it the "Eaglet" but it was renamed the "Texaco Eaglet" after the transcontinental flight. The glider's maximum speed was 125 mph, and flight tests pegged the stall speed at 15 mph. Total cost of the "Texaco Eaglet" came to $2,500.

A 500 ft tow rope was selected and carefully tested to be just strong enough, so that it would break before the wings of the "Texaco Eaglet" or the Waco Ten tow plane. Both aircraft could release the rope in an emergency.

Piloting the glider, Hawks took off from San Diego's Lindbergh Field on March 30, 1930. A Waco Ten biplane, "Texaco No. 7," powered by a 220 hp Wright J-5 engine, and piloted by J. D. "Duke" Jernigin, Jr., towed Hawks' glider. Jernigin carried one passenger, Wallace Franklin. They stopped daily for fuel, following the same routine. Hawks released the tow rope when over the airfield, and performed a short air show for the crowd below. Meanwhile the Waco Ten landed and refueled. and waited to hook-up to the "Texaco Eaglet" and takeoff on the next leg. This routine kept ground time to a minimum, allowing them to keep to their aggressive schedule and meet the large crowds (5,000 - 10,000 people) at the next stop.

During the eight day flight, the pilots logged 44 hours of air time and covered 2,860 miles. They carried twelve pounds of "glider" mail and a palm tree seedling from the city of Los Angeles to the citizens of New York. After a few more flights, they donated the airplanes to the Smithsonian.

In the late 1920's the Travelair company built a few "Mystery Ships," racing airplanes whose details of construction were closely guarded secrets. In 1930, Texaco bought the fourth "Mystery Ship" from the Travel Air company, for Hawks to fly in the National Air Races.

"Texaco 13" was identical to the other "Mystery Ships", but included a cockpit full of special instruments for long distance flights, so the ship was heavier than the other three. The cockpit was fully enclosed and almost flush with the top of the fuselage. The racer was painted a Stearman vermilion and white, with a blue stripe separating the red and white. On two occasions he cracked the ship up, one time injuring himself very, seriously. He never did well at the Nationals as his plane was not set up for pylon type racing. However, he raced at the 1930 National Air Races, his "Texaco 13" wearing their Texaco shorter racing wings - race No. 28. This wing switch was made at the factory prior to the races. Hawks entered the Thompson Trophy Race but pulled out of the race on the third lap. A piece of masking tape placed over the gas cap (for streamlining) caused a loss of pressure and the engine would not operate at full throttle.

Even so the "Texaco 13", with Frank Hawks at the controls, did set many long distance records both in the United States and in Europe. then beat his own speed record flying the legendary Travel Air Mystery ship Texaco No. 13 which now hangs in Chicago's Museum of Science.

Frank Hawks to Amelia Earhart. June 18, 1932. Congratulatory telegram."When you made your marvelous flight I was a pretty sick hombre in Boston and though belated my congratulations are, none the less sincere. Am being honored to be among first to greet you on your arrival . We are all very proud of you."

One of the first products of the new Northrop Corporation was the Gamma special-purpose and mail-carrying aircraft. The first two examples built were known as the Gamma 2A and Gamma 2B. The Gamma 2A was built for the well known pilot Frank Hawks and the Gamma 2B was built for the Lincoln Ellsworth Trans-Antarctic Expedition. Each plane had an enclosed cockpit set on top of the fuselage aft of the wings. The two planes were completed in August of 1932. The Gamma 2A was purchased by Texaco on December 6, 1932 and was put at the disposal of Frank Hawks for record-breaking and advertising purposes. It was given the civilian registration NR12265, and flew with the Texaco Sky Chief logo prominently displayed.

On June 2, 1933, Hawks set a west-east nonstop record in his Northrop Gamma, flying from Los Angeles to Floyd Bennett Field, Brooklyn, N.Y. in 13 hours, 26 minutes and 15 seconds, at an average speed of 181 mph.

He didn't limit his commercial endorsements to Texaco. You can still find "FRANK HAWKS "AIR HAWKS" CLUB PIN 1930s" on Ebay. A cereal box prize for budding airmen of the the 1930s . . .(many members went on to become WW11 combat pilots) ... 1 1/2 inch span gold metal wings with likeness of famed pilot Frank Hawks in helmet and goggles with legend, "FRANK HAWKS AIR HAWKS" and "Post Bran Flakes"..."It's not too late to join!"....

Hawks was killed in 1938, flying a Gwinn Aircar that many aviation experts considered a far safer aircraft than those that he normally flew.