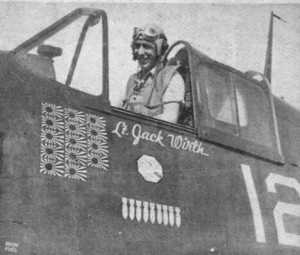 John Louis Wirth was born in North Vernon, Indiana, on April 25, 1917, son of Stanley and Adele Marie (Langenhurst) Wirth. He attended Horace Mann High School, Gary, Indiana, and on September 18, 1934 enlisted in the U. S. Navy. He was appointed Machinist on May 7, 1941 and after flight training was designated Naval Aviator on March 21, 1942. He vas commissioned Ensign on June 15, 1942 and subsequently advanced in rank to that of Lieutenant, to date from July 1, 1944.

After flight training, he was assigned from May until September 1942 to Patrol Squadron EIGHTY-THREE. The next month he joined Headquarters Squadron, Patrol Wing ELEVEN (designation changed to Fleet Air Wing ELEVEN in November 1942) and while serving with that unit participated in the North-African Campaign. In June 1943 he was detached for duty with Fighting Squadron THIRTY ONE. For outstanding services while attached to that squadron, he was awarded the Navy Cross, the Silver Star Medal with Gold Star in lieu of the Second Silver Star Medal, the Distinguished Flying Cross and the Air Medal with Gold Stars in lieu of the Second and Third Air Medal. The citations follow in part:

"For extraordinary heroism... in action against enemy Japanese forces during the First Battle of the Philippine Sea, on June 19, 1944. As a member of a twelve-plane fighter group flying combat air patrol over his Task Group, (he) answered a call to intercept an enemy group of thirty or more fighters about fifty miles distant and, gallantly leading his air group in the face of these heavy odds, pressed home repeated attacks against the enemy and was personally responsible for the destruction of four of the fifteen hostile aircraft shot down by the six planes from his carrier..."

"For conspicuous gallantry and intrepidity... in action. against enemy Japanese forces in the vicinity of the Philippine Islands, September 24, 1944. Skilled and aggressive in combat, (he) valiantly led his section in the first fighter sweep against an enemy-held airfield. Relentless and determined, he pressed home a furious attack and blasted four Japanese planes from the sky..."

Gold Star in lieu of the Second Silver Star Medal

"For conspicuous gallantry and intrepidity.in action against enemy Japanese forces in the vicinity of the Philippine Islands, September 13, 1944. Alert and aggressive in combat. Lieutenant Wirth participated in a pre-dawn take-off to attack a vastly superior number of enemy planes. Flying through intense antiaircraft fire, he closed the formation with bold determination to blast three Japanese planes from the sky and probably destroyed a fourth. Flying his plane with skill and daring, he strafed the airfield and destroyed a large transport plane parked on the ground..."

"For heroism and extraordinary achievement in action against enemy Japanese forces, operating from the USS CABOT, in action against enemy Japanese forces in the vicinity of the Bonin Islands, on August 4, 1944. Participating in a daring fighter-sweep. Lieutenant Wirth pressed home a bold and aggressive attack against an enemy light cruiser, scoring a direct hit upon the hostile warship. Undaunted by the intense antiaircraft fire and adverse weather conditions, he assisted his division Leader in sinking two enemy barges and in damaging two other craft. His superb skill as an airman, cool courage and zealous devotion to duty were important factors in the infliction of extensive damage upon the enemy..."

"For meritorious achievement.. .during action against enemy Japanese forces in the vicinity of New Guinea and Truk. Pressing home his bombing and strafing attacks in the face of heavy anti-aircraft fire, (he) damaged the antiaircraft-positions and airfield on Vandoemoear and Wakde Islands before his plane was hit by antiaircraft fire, causing him to make a forced water landing at Wakde. On April 1, 1944, he assisted in bringing down an enemy medium bomber, at Hollandia strafed grounded planes and ships and later, bombed buildings on Dublon Island, causing extensive damage..."

Gold Star in lieu of the Second Air Medal

"For meritorious achievement ...in action against enemy Japanese forces in the Pacific War Area on July 8, 1944. As a section leader of a four-plane division flying combat air patrol over his Task Group, (he) promptly answered a call to assist a group of fighters in combat with enemy aircraft thirty miles distant. Upon reaching the scene of action, he courageously entered the fight and, pressing home his attack, shot down one enemy plane out of a total of three destroyed by his division..."

Gold Star in lieu of the Third Air Medal

"For meritorious achievement ...in action against enemy Japanese forces in the vicinity of the Philippine Islands, September 12, 1944. Participating in a fighter-bomber strike against enemy shipping, (he) pressed home his deadly attack to score a direct hit on a 3000-ton enemy freighter, causing the ship to explode and burn..."

He is also entitled to the Ribbon for and a facsimile of the Presidential Unit Citation awarded the USS CABOT. Credited with fourteen enemy planes shot down, Lieutenant Wirth was designated a World War II Navy Ace. Detached from Fighting Squadron THIRTY-ONE in November 1944, he was assigned the next month to the Naval Air Station, San Diego, California. He was killed in a plane crash near Alpine, California, on April 13, 1945,

He was survived by his wife, the former Thelma Irene Kelley of Pensacola., Florida, and a son, John Joseph Wirth. Mrs. Wirth's address at the time of his death was Routs 4, Box 315, Pensacola.

My thanks to Richard Wirth, John's brother, for providing this biography and the photograph.