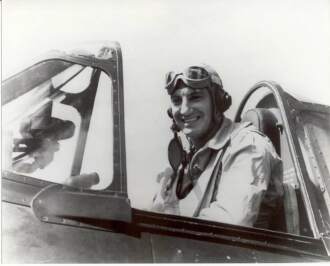 Hellcat ace of the US Navy

He was born in New Orleans, Louisiana, and attended Loyola University where he enrolled in the Civilian Pilot Training program. Since this was a government sponsored program each student had to sign an affidavit to join the military in the event of war.

When December 7, 1941 (Pearl Harbor) happened, recruiters came to school two weeks later and he signed up for the U.S. Navy. He was allowed to complete the present semester and at the end of May 1942, reported to the U.S. Navy Pre-flight School at the University of Georgia. Upon completion of pre-flight school he reported to NAS New Orleans for primary flight training. After three months, he reported to NAS Pensacola for further training in tactics and assignment as a fighter pilot.

Upon receiving his wings in April 1942, he was assigned to NAS Melbourne for further fighter pilot training after which he qualified as a carrier pilot on USS Wolverine, a converted Great Lakes steamer. He was then assigned to his first combat unit VF-50 flying the training at NAS Atlantic City. The squadron was assigned to the newly commissioned light carrier USS Bataan and also transitioned to the F6F Hellcat. After passing through the Panama Canal, the carrier arrived at Majuro Atoll on April 9, 1944 to join Task Force 58. His first combat duty occurred on April 21, 1944 with strikes against Sawar, Sarmi, and Wakde, New Guinea, in support of landings at Hollandia. On April 30, 1944 he participated in strikes against Truk airfields on Moen, Etin, and Param Islands. On May 2, 1944 he was assigned spotter duties from the air while battleships of TF58 bombarded Ponape, Caroline Islands. On June 11, 1944 he participated in strikes against Guam and Rota in the Marianna Islands and four days later participated in strikes against Chichi Jima in the Bonin Islands, 511 miles from Tokyo.

On June 19, 1944 he was leading a division of four fighters on CAP at 20,000 feet when he received an urgent call from the Bataan to vector west at Buster speed to intercept a large bogie heading for the fleet. After a short distance, he spotted the large group of enemy aircraft, which he identified as about 95, but later found out to be 120. He burned the first on a high side run and later accounted for two more. His wingman shot down two and the squadron accounted for twelve. After landing he held up 3 fingers when he passed the bridge and everyone went wild. He downed another Zero in the Marianas on June 23 and achieved Ace status on July 3 when he shot down a pair of Zeros off Iwo Jima. He claimed a total of nine victories while serving with VF-50. On July 12, 1944 the Bataan's forward elevator failed and the Bataan was sent back to the United States. Lt. (j.g.) Rehm, his wingman and two other fighter pilots were sent over to the USS Bunker Hill to join VF-8.

While with VF-8 he downed a Zero and a Nick K1-45 twin-engine fighter over Taien Airdrome Formosa on October 12, 1944 and two days later he shot down another Nick off Formosa. The next day he accounted for a snooper over the edge of the fleet making four kills with VF-8 and a total of thirteen.

On October 16, 1944 he and his wingman escorted an SB2C on a northern sweep to locate the remaining Japanese carrier sailing from Japan waters. After cruising 250 miles north, his engine quit at 500 feet altitude and he landed in the water. Since everything went down with the plane, the SB2C threw him a two-man raft and he climbed aboard. This was home for the next three days. No water or provisions, the days were very hot and the nights extremely cold. Since the raft made a shade, there were many various fish scratching themselves beneath the raft including several large sharks. On the second day a large multi-engine aircraft passed overhead, however, he was too high and was gone all to quickly. After the third day he heard a faint unfamiliar noise behind him and as he turned, he saw a submarine closing on his position. The following is a direct quote from the USS Saury's log:

At 1447 Lt. (j.g.) D. R. Rehm, USNR (263556) of VF-8 was picked up and brought aboard. Position 26-21N, 130-42E. This was about 20 miles southeast of the reported position. Pilot had been in the water about 2½ days, but his physical condition was good considering his experience. He had no food or water in over 72 hours. Deflated the life raft with pistol fire and headed back into assigned area...

On November 4, 1944 the USS Saury SS189 moored at Saipan and Lt. Rehm departed for the United States and further assignment. During November 1945 he was released to inactive service and joined a Naval Reserve Fighter Squadron.

He volunteered for active service during the Korean War and served with VC-6 flying the AJ-1 Savage, the Navy's atomic bomb carrier. He was released to inactive service in 1954 and served as Commanding Officer of an anti-submarine squadron in the Naval Reserve. He was medically retired as a Commander in June, 1960.

My thanks to Daniel Rehm, and his daughter, Peggy Swords, for providing this information.