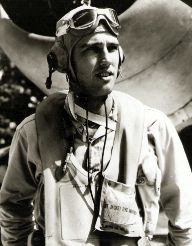 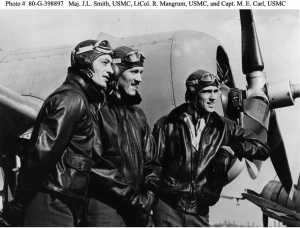 As a member of the ill-fated VMF-221 during the Battle of Midway, he earned his first Navy Cross while leading an attack against a vastly superior number of Japanese bombers and fighter aircraft. At 5:34 A.M. on June 4th, a Navy Catalina flying boat spotted the Japanese attack force and radioed: "Many enemy planes heading Midway." These were the carrier based fighters and bombers which were to "soften up" the island before the planned invasion. There were twenty-eight Marine fighter planes on Midway under the command of Major Floyd B. Parks. Nineteen of these were old Brewster F2A Buffalo fighters. Immediately Major Parks took off with seven Buffalos and five Wildcats to intercept the enemy attacking force. The rest of the fighters were ordered up too, but held in reserve.

When Parks first spotted the enemy formation at 14,000 feet over Midway, he saw over 100 fighter planes and bombers. The Zero escort was beneath the bombers, apparently not expecting fighter opposition. The Marine fighters peeled off and roared into the Vals, all guns blazing. Several of the Japanese bombers were hit, and dropped away toward the sea. But then the Zeros saw the Marine fighter planes and climbed to meet the Wildcats and sluggish Buffalos. The Marine pilots didn't have a chance. The dancing Zeros cut up the brave defenders. Not only were the marines heavily outnumbered, but their planes could not match the performance of the Japanese fighters.

In a vicious dogfight the Americans lost plane after plane. In Parks' group only two pilots survived. One of them was Captain Marion Carl. He destroyed one Zero on his first pass, but as he climbed for altitude again, other Zeros got on his tail. He nosed over, rammed everything to the firewall, and pulled away. A Wildcat could at least outdive a Zero. In this way Captain Carl managed to escape. On his way back to Midway he made another attack on three Zeros below him and sent one down, burning and out of control.

The rest of the Marine fighter planes joined Major Parks' fight, but to no avail. After the "all clear," the Midway radio called: "Fighters land, refuel by divisions...." No fighters landed. Then came the call, "All fighters land and reservice." only ten planes came back, and only two would ever fly again. It was the heaviest loss the Marines suffered in a single air battle during the entire war. One of our pilots said bitterly afterwards that the Buffalo "should be in Miami as a training plane." Capt. Carl flew one of only two planes sent up in the second defensive sortie from Midway.

Two months after Midway, on August 7, 1942, Marines stormed ashore in the Solomons during the first American offensive of World War 2. The ensuing six-month campaign for Guadalcanal became a contest to take the island's airfield, which the Marines named Henderson Field for a pilot killed at Midway. The code name for Guadalcanal was Cactus; thus the collection of squadrons, American and Allied, that rose from Henderson Field to do battle each day was called the Cactus Air Force. While the story of the Cactus Air Force is a tale of inter-service cooperation and dependency, the stars of the struggling group were the Marine fighter and dive- and torpedo-bomber squadrons. VMF-223 and VMF-224 were the first fighter squadrons to arrive, flying the F4F-4 Wildcat. Fighting from August to November, the pilots of these and other units that followed eventually turned back the Japanese bombing offensive. Several of these Marine fighter pilots became aces, and nine Marine aviators received the Medal of Honor for their service or for specific missions during the Solomons campaign.

Among the other standouts during this period were such men as:

All these men received the Medal of Honor for their service at Guadalcanal.

Along with some other survivors of Midway's VMF-221, Capt. Carl was assigned to VMF-223, and headed to Guadalcanal on August 20 in the very first group of American fliers to land there. Four days later, during the Battle of the Eastern Solomons, VMF-223 intercepted six torpedo planes and fifteen Zeros from the Ryujo. They caught the Japanese planes between Malaita and Florida at 9,000 feet, and shot down all the torpedo planes, while the Zeros got three Americans. Marion Carl claimed two torpedo planes and one Zero. He became an ace on 26 August 1942, when he was jumped while coming in for a landing at Henderson Field. He cranked up his wheels and engaged the audacious Zero over the beach - exploding his quarry before hundreds of witnesses.

During an aerial fight off the coast of Guadalcanal on September 9, he was forced to bail out of his shot-up Wildcat and was losing his battle to swim ashore against the tide, when he was picked up by friendly natives in a canoe. After five days with the natives, he finally made his way back to his base. General Geiger, the Marine air commander, informed Captain Carl that Major Smith, his rival ace, had just shot down his 16th plane, while Carl only had 12. "What are we going to do about that?" the General asked. "Goddammit, General, ground him for five days!" On October 1, Admiral Nimitz awarded Carl, Galer, and Smith Navy Crosses. But the grinding attrition continued; two days later, Carl led up the remaining four planes of -223, shooting down a Zero, as did two others. During the period from late August through November 1942, the Marine pilots faced almost daily combat, and some of them, like Carl and Smith ran up large scores. He returned to the United States on 21 October 1942.

In July 1943, now Major Carl left San Francisco on his second tour of combat duty, as C.O. of VMF-223. This tour took him through the Hawaiian Islands to New Hebrides, Vella Lavella in the Solomon Islands, Guadalcanal and Emirau. His squadron played a key role in the aerial reduction of Rabaul in early 1944. He scored two more kills while flying Corsairs.

In November 1944, he returned from the Pacific area, having earned a total of two Navy Crosses, three Distinguished Flying Crosses, and 13 Air Medals. Next, he was assigned duty with Flight Test, Naval Air Test Center, Patuxent River, Maryland. On V-J Day, 14 August 1945, he was promoted to Lieutenant Colonel.

After the war, he was the first Marine Corps pilot to land a jet aircraft, an F-80 Shooting Star, aboard an aircraft carrier on 1 November 1946. Carl became a Navy test pilot, setting a world speed record of 651 mph on Aug. 25, 1947, at Muroc Field, now Edwards Air Force Base, in California. But his fame was fleeting and soon forgotten. Chuck Yeager, the Air Force's top test pilot, wrested away the title of world's fastest human by breaking the sound barrier two months later, also at Muroc. He flew a Bell X-1 rocket plane at Mach 1.07 -- 700 mph -- on Oct. 14. In 1953, Carl set a world altitude record of 83,235 feet and two years later, as CO of VMJ-1, he was deployed to Taiwan for classified operations. They flew F2H-2P photo Banshee aircraft for reconnaissance missions over China.

Sadly, General Carl was shot and killed by an intruder in his Oregon home in June, 1998. He was 83 years old. (I have often reflected on the tragic irony of this. Here's a man, a great man, if you will, who had "fought the good fight" for his country, a man who had met in battle and prevailed against the best fliers of the Japanese Empire, a man who served his country his entire life, and then, in his well-deserved rest, was cut down by some worthless punk. It's just too sad. -- SS) In recent years there has been a small, but dedicated effort to recognize Carl's Heroism with a posthumous Medal of Honor. Surely he deserved it.