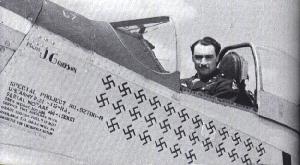 Chasing the Bf-109 over Neu Brandenburg airfield, Major Goodson caught up and fired a short burst. The German went straight down and exploded on the deck. Almost immediately, he saw another coming in to land, and raked the length of it with machine gun fire. The second plane went into a ground loop and started burning.

Then he spotted a stubby plane partly hidden in a revetment; it had to be an Me-163, a prototype of the revolutionary rocket fighter that the Germans had under development in July, 1944. Goodson had to go for it. He circled back over the airfield, the flak started up, and "Wham!" his plane shuddered and his right knee went numb. Both he and his plane had been hit.

The Mustang started to stall, and he nursed the plane down, bumping to a rough landing. He climbed out, and signaled his squadron flying overhead to shoot up and destroy his downed plane. He moved into the nearby fir and birch forest and they did so. He treated his wounded leg as well as he could with his emergency first aid kit, then pulled out his map. He was in northeastern Germany, about 70 miles from the Baltic. While it was a long shot, his only option was to make for the port of Rostock, and from there try to get to Sweden by boat. But he could hardly walk; his right leg kept collapsing under him. He forced himself to keep moving, soon coming to a road and a wheat field, which seemed to be a good hiding place if needed. Getting hungry, he headed for the nearest farm. All the out-buildings were locked and he settled for a few rotten potatoes from the pig sty and some fresh water from a trough. Out on the road, he easily hid whenever a bicyclist or a motor vehicle came along. Once a searchlight-equipped car scanned the fields, evidently looking for him, but he avoided the beams. He stumbled on, stopping at a deserted stream to wash up and shave, razor and soap thoughtfully provided in his pilot's escape kit. But hunger continued to weaken him; he even pounced on a field mouse, but couldn't bring himself to eat the tiny creature.

Once a horse-drawn carriage filled with Wehrmacht officers rolled by, and Goodson started thinking about the wartime Germany, how little it had changed, and the first time he saw the black crosses on a Bf-109. That was in 1940-41, when he was flying with the RAF.

Born in America of British parents, but growing up in Toronto, young James Goodson wanted to see some of the world, and worked his way to England as a pantry boy in a Cunard liner. When the war started, he wanted to return to Canada, and booked passage on the SS Athenia on September 3, 1939. A German u-boat torpedoed the great liner that night; Goodson struggled into a life boat and was rescued by a Norwegian ship. Back in England, his anger stirred him to enlist in the RAF, thinking to be a fighter pilot. With the usual amount of red tape, his application was accepted and he was promptly sent to Canada, where the RAF aviation cadets were training. This time, his ship, The Duchess of Athol, crossed the Atlantic without incident. In Toronto's National Exhibition Halls, where the cadets were being processed, he first met Mike Sobanksi, the tall Pole, who had fought with the Polish Army, been injured, and then escaped to America.

After his training in Canada, Goodson once again crossed the Atlantic in another crowded liner. In England, he fretted away more time in advanced training in Cumberland, then flying Hurricanes on uneventful operations in the North. He lobbied for transfer to 11 Group, which was heavily engaged in the aerial battles to the South. He flew cover for the disastrous Dieppe raid in August, 1942, and the following month was posted to the 133rd Squadron, an RAF 'Eagle' squadron - RAF units made up of American pilots. At Debden, he found out that most of the squadron's pilots had been lost on a recent mission to Brest. Don Gentile had not been on that mission, nor had Don Blakeslee, soon promoted to Squadron CO. Blakeslee quickly re-built the squadron, in his own swaggering image.

Soon the three Eagle Squadrons were transferred to the U.S. Eighth Air Force, becoming the 4th Fighter Group (the 133 Sqn redesignated as the 336FS). Without American planes to fly,they continued to fly Spitfires, painting over the RAF roundels with USAAF stars. Goodson and Dixie Alexander had two of the first Spifires to be repainted, and Goodson sold Blakeslee on the idea of launching the first U.S. fighter mission of the ETO. Blakeslee agreed, and the two pilots flew over the Channel on a low-level strafing mission, a type of mission code-named a 'Rhubarb'. Basically, the two planes zipped across the Channel, shot up a couple bicyclists and trains, and returned before they could get in trouble. The PR boys got a hold of the news and soon an article in Stars and Stripes blared out "At dawn today, fighter planes of the U.S. Eighth Army Air Force carried out daring low-level attacks on rail, road and water transport in Northen France and Belgium ..." Blakeslee was furious and charged into their barracks, and bellowed at Goodson, "All right! Where's the other half of the Eighth Air Force?" He calmed down, but made the two pilots foot the squadron's sizable bar bill that night.

The Fourth shortly transitioned to the American-made P-47 Thunderbolt, a plane about as different from their beloved Spitfires as possible. The Spitfires were delightful (and deadly) but had no range. They had been perfect for the Battle of Britain, but escorting bombers over Germany called for a long-range fighter. Already (About this time, Blakeslee was promoted to command the entire Fourth Fighter Group and uttered his caustic judgment on the P-47: "It damn well ought to dive; it sure as Hell can't climb.")

On August 16, 1943, Goodson rescued Blakeslee from three FW-190s, in a thrilling dogfight over Paris' Le Bourget airfield. The mission promised to be a milk run, suitable for breaking in a new wingman, Roy Wehrman. But they got involved in a tough dogfight, Blakeslee baring escaping in an oil-covered Thunderbolt. He couldn't see a thing, and Goodson had to talk him down, all the way to a landing at the Manston emergency strip. Wehrman was shaken and sweating profusely; but he was okay and asked Goody to let him know the next time they were planning a milk run.

The Fourth switched over to Mustangs in early '44, and helped escort the bombers on the Berlin raid of March 6,1944. Goodson led a squadron on this mission; they caught up to the Flying Fortresses outside of Madgeburg, just as hordes of German fighters closed in. He dove after a gaggle of Bf-109s, which were focused on the bombers, picked out one target and flamed it. He pulled around to get into the battle, found three of his planes still with him, and almost immediately damaged another 109, forcing it to break off its attack on a Mustang. Again he led his flight back into the actioon, this time getting behind a lone B-17, always easy prey for the Germans. Goodson got into a turning contest with a 190 (which he thought the Mustang should win), but the 190 crept up on him in the turn. In desperation, he dropped a flap, pulling out of the line of fire. The German dove away for the deck, Goody pursued and eventually caught up, but ran out of ammo after a couple short bursts. He broke off and headed for home. Some time later, he received a Distinguished Service Cross citation for the mission.

More on Goodson to follow - his later experiences with 4th Fighter Group, and in Germany after being shot down.