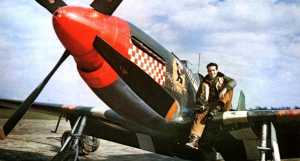 Ace of the 4th Fighter Group

Dominic S. Gentile was born on December 6, 1920. He enjoyed aviation as a youngster; he even acquired an Aerosport biplane as a teenager, and cut quite a figure in the small town of Piqua, Ohio, flying it around, buzzing water towers, his girlfriend's house and the like. He enrolled in the Royal Canadian Air Force right out of high school.

He soon transferred to the RAF and began flying in England. In 1942, he joined the No. 133 Eagle Squadron, composed only of American fighter pilots who had volunteered to fight with the British. Flying Spitfires and Hawker Hurricanes, the Eagle Squadrons gave Don Gentile the chance to prove himself in combat against the Germans.

He score his first aerial victory on August 1, 1942, destroying an Fw-190 and a Ju-88 over France. For this he was awarded the British Distinguished Flying Cross.

Down by the Railroad Track

On a mission in early 1944, Gentile downed a couple of Germans, only to be bounced by two others. Gentile went into a tight turn with the Hun. Not many pilots could turn in a Thunderbolt on the deck with an FW-190, but Gentile had the skill and was too frightened to worry about spinning out. The Hun had his No. 2 glued on his wing and he soon showed Gentile he was a tough adversary. Gentile went shuddering and shaking over the treetops with the two Germans. He was cold with fright, the same as he had been in his green RAF days when he escaped a German assailant with violent black-out turns and pull-outs, thus winning the bet that his body could stand more black-outs than the Germans. On some reverse turns Gentile squirted what little ammunition he had left after downing the other two Jerries. Now he found himself without ammunition and with two determined, accomplished killers on his tail. In the head-on attacks the German discerned that the Thunderbolt's wings were not firing; this made him press the attack that much more resolutely. The Hun peppered Gentile with some 30° deflection shots. Gentile pulled away and flicked down.

One of the Germans had been lost in the maneuvering and Gentile found himself going around in circles over the trees, rawhided by the German. Gentile was defenseless without ammunition; his one chance of surviving the vendetta was to evade the German fire until his ammunition was also exhausted. The German kept pressing for the one brief opportunity of lining the Thunderbolt up in his sights. Gentile's hand got clammy on the throttle.

"Help! Help! I'm being clobbered!" Gentile screamed in near panic.

Somewhere above in the clouds the rest of his squadron was flying about. Until this day Gentile remembers the imperturbable drawl of Willard Millikan answering: "Now, if you will tell me your call sign and approximate position we'll send help."

But Millikan couldn't find Gentile. The duel (cannon vs. flying skill) went on down below. Characteristically, Gentile began talking to himself: " . . . Keep calm, Gentile . . . don't panic."

Gentile still managed to keep one jump ahead of the German, but his desperation mounted. The Hun was lathered and remorseless, having seen the American clobber the two 190 pilots, his acquaintances and perhaps his friends. He knew by now that the American with the "Donnie Boy" insignia was a superlative pilot; this was a chance to blast an American ace out of the sky without risk. He kept firing, but the American always climbed or banked just inside his line of fire. Gentile felt like giving up; he was going to be shot down anyway; it would be better to get some altitude and bail out. But he had some last words:

The two fighters were flat-out on the deck, down by the railroad track, the German on the American's tail firing. The German began to close the gap. Gentile suddenly honked his ship up and stood it on his prop until it quivered and was ready to stall out. For the first time Gentile had gotten above the Hun and could have swooped down on him for a kill had his ammunition not been exhausted. Gentile had preserved himself. He had made the Hun fire all his ammunition without hitting him. The German suddenly peeled off and sulked home, his two FW comrades unavenged. Gentile bounced down the runway at Debden. He didn't bother to gun the motor before switching it off. He was spent and worn, his very fingers heavy with weariness. The intelligence officer jumped on the wing of his plane to interrogate him. Gentile didn't answer, just sitting in the cockpit rolling his eyes and panting.

One of the pilots composed a song to be sung to the tune of Tramp, Tramp, Tramp, the Boys Are Marching. It became a Debden theme song. The chorus:

Help, Help, I'm being clobbered,
Down here by the railroad track,
Two 190s chase me 'round
And we're damn near to the ground
Tell them I got two if I don't make it back!

Duane Beeson and Don Gentile were involved in a highly publicized "ace race," to see who could shoot down more German planes. They both forwent leaves thay were due in early 1944 to continue their battle.

Gentile had a big day on March 8, 1944, when he shot down 3 Bf-109s (plus a shared credit) over Berlin. On April 5, 1944, Gentile claimed his 27th enemy planes destroyed, thus breaking Eddie Rickenbacker's WWI record of 26. (At the time the Eighth Air Force recognized ground kills as part of a pilots score, in part because strafing missions were felt to be least as dangerous, if not more so, than aerial combat. Seven of Gentile's destroyed aircraft were on ground kills.) Three days later, on April 8, Gentile downed three more planes, raising his total to 30. Gentile was credited with 21+ air victories. He scored two kills with the RAF in the Spitfire, 4.33 kills in the P-47 Thunderbolt, and 15.5 kills in the P-51B Mustang. He made half of his claims in March 1944, flying over the skies of Germany.

On April 13, a throng of local and US reporters gathered at Debden to greet Gentile, then the leading 8th AF ace. He buzzed the airfield, too closely as it happened, and "pranged his kite." Blakeslee was livid, and true to his word, sent Gentile home (whose tour was up anyway).

It was in the Fourth Fighter Group that Gentile met Captain John T. Godfrey, another American pilot who had been transferred from the RAF. With Godfrey as Gentile's wingman, the two formed a lethal combat team whose impressive teamwork destroyed more enemy planes than any other partnership of American fighter pilots. In June of 1944, the two men returned to the States, temporarily participated in a war bond tour, and were eventually separated after Gentile's assignment to Wright Field in Dayton, Ohio.

After the war Don Gentile stayed with the Air Force: as a test pilot at Wright Field, as a Training Officer in the Fighter Gunnery Program, and as a student officer at the Air Tactical School. On January 28, 1951, thirty year-old Don Gentile made his last flight, crashing a T-33 trainer which killed both Gentile and his passenger. His decorations include the Distinguished Service Cross, the Silver Star, the Distinguished Flying Cross, the Air Medal, the Presidential Unit Citation, the World War Two Victory Medal, the American Campaign Medal, the British Distinguished Flying Cross, the British Star, the Eagle Squadron Crest, and other foreign medals.