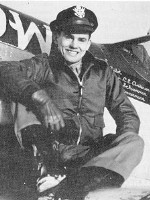 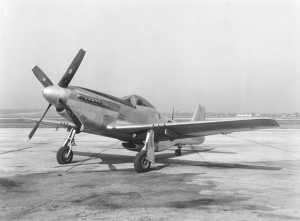 Bud Anderson was NOT Chuck Yeager's wingman, but ... due to a printer's mistake, that may be how he'll be remembered. In his memoirs, he adopted that philosophical attitude. And throughout the book, he combined low-key honesty about his own skills, a mastery of detail, and an uncanny ability to convey the attitudes prevalent in World War Two to today's reader.

Bud was born on January 13, 1922 and grew up on his family's ranch; he got used to hard work and responsibility early. He learned to drive a car almost before his feet could reach the pedals. Once he smashed into the garage, but his Dad didn't chew him out. Instead he put the young Bud right back in the driver's seat, and encouraged him to keep driving. In high school, Bud played football and basketball, and enjoyed fast, loud cars. He was introduced to aviation at Oakland Municipal Airport, and heavily influenced by one Sgt. Arthur J. Lewis. In those days, "Sarge" was a big wheel who made time for a teenager. Years later, Bud Anderson, was able to show his appreciation for Lewis, who had earned his officer's commission and since retired.

Bud was working at the Sacramento Air Depot when the Japanese attacked Pearl Harbor; next month he enlisted in the Army Air Corps and left for the war. He did his Primary Flight Training at Lindbergh Field, San Diego, and his Advanced Training at Luke Field near Phoenix, Arizona.

At Tonopah, his excellent eyesight really began to tell. All the pilots had at least 20/20 vision, but somehow or other, Bud could see those little dots in the sky before the others. They were flying P-39s, disliked by most pilots, "It'll tumble and spin and soon auger in ..", they sang. The P-39s were not suited for combat in Europe, so the fliers of the 357th figured to go to the Pacific or North Africa. But late in 1943, they shipped out for Europe, absent their P-39s.

The mystery resolved itself in early January, 1944, when they began flying P-51 Mustangs, which were ideally suited for Europe when equipped with the Packard Merlin engine.

He described how he felt before his first mission on February 5: "My pulse was playing a Gene Krupa solo as I walked to my plane that morning and climbed into the cockpit. Once you were strapped in there, so very alone, the minutes crawled by. Later on I used this time to focus on the mission, thinking about what lay ahead, and preparing the way an athlete prepares for a game. But on February 8, 1944 I was a little less sophisticated about that sort of thing. I had logged 893 flying hours already, better than an hour and twenty minutes a day for two years. But only 30 hours and 45 minutes of that was in P-51s. I knew I had lots to learn. And what I was thinking about before prodding the Merlin to life was of not getting lost, not screwing up. I was more afraid of screwing up than of dying."

March 3, 1944 - Anderson's first victory: Bf-109 trying to kill a straggling B-17 on one of the first Berlin missions. His after action report is transcribed below (including the typos!). You can click on a copy of the original at Bud's web site.

Of course, this official report, prepared by the Squadron ACIO, is extremely cut-and-dried and factual. In To Fly and Fight, Bud describes how John England came up to him after he had downed the German plane. While he was quite certain he had scored, he couldn't be sure what John England was going to say. Perhaps he would claim the kill. On landing, Bud avoided the Intelligence officers, and headed over to the Officers' Club to find out what England would say. "Goddam, Andy! Best shooting I've ever seen! You hit that sonofabitch at over forty degrees!" Bud made his best "Aw shucks" reply, and then excitedly RAN over to the telephone to claim his first victory.

He shot down his first Fw-190 of the day when eight of them came after the B-17s. The Mustangs went after them, and Bud fired at the leader from 350 yards; he rolled over and bailed out. Bud chased a second through some intermittent clouds, held off until he was in certain range, and then put a long burst in the Focke-Wulf, setting it afire. He got his third of the day when the German didn't see Bud and his wingman, and flew in front of them.

Like most of the aces, Anderson gave full credit to his ground crew, that supported him, and made sure his Mustang was in top condition. In To Fly and Fight, he related that one evening he returned from a mission, and casually noted to his crew chief, Sgt. Otto Heino, "We're going to have to get that paint off some time." (It added a little unnecessary weight to the plane.) The next morning, Old Crow was glistening bare metal. Sgt. Heino and the crew had stayed up all night rubbing off the paint with gasoline-soaked rags; their hands had been chafed raw and bloody in the process.

In his aircraft Old Crow, he had a couple of skirmishes with the German jets. He "butchered" his chance to shoot down the first one he saw, an Me-262 flying under him before his group had joined up with their bombers. Thinking to dive and build up speed, Anderson dropped his external fuel tank without switching to internal fuel first. His engine quit cold! He immediately re-started and thought he still had a chance to get the jet. But as he closed in, the jet "just shrank up and vanished behind the gunsight's bull's-eye of light."

"On November 27 we tried some new tactics. As a ruse, the Mustangs of the 353rd Group arranged themselves in bomber formation and our planes flew the standard zigzag escort pattern above them. The idea was to fool the German radar and scramble the interceptors. It worked almost too well. They threw themselves at us 100 miles southwest of Berlin. The fighter pilots must have had coronaries when they discovered what they were attacking, - not B-17s, but more than 100 fighters spoiling for trouble. Our pulses jumped too, for they came in insect-like clouds we called gaggles.

"It was the biggest concentration of enemy planes I'd ever seen! They came in two clusters of 80 to 100 planes each, mostly Focke-Wulfs. They were coming at us almost head-on, at eleven o'clock; we turned into them as they passed and all hell broke loose. I fell on a straggler who broke smartly and ran for the deck. Letting him go, I picked out another 190 ahead at about 31,000 feet, closed to within 250 yards, and hammered him with a burst that made flashes all over the fuselage. He rolled over slowly, too slowly, and fell into a spin. The pilot must have been dead. I turned away, looking for other targets. There were airplanes darting all over the sky."

In the fall of 1944, the 357th combat-tested the new G-suits that had been developed for pilots, as Bud Anderson recounts. "The Mustangs could take very hard turns. Long before the wings flew off, the pilots would lose consciousness. Five G's and you might "gray out" but be able to function.

Six G's or so and you would black out completely. The form-fitting suits inflated as the airplane pulled G's, hugging you, and preventing the blood from leaving your head all at once. There were two experimental suits. One was water-filled, and turned out to be too cold at six miles up, even when filled with warm water on the ground. The other ones, air suits, drew air from the pressure side of the engine's vacuum pump. These suits wrapped around your abdomen, thighs, and calves, and inflated automatically. These worked much better."

"With the G-suits, we could fly a little harder, turn a little tighter. We could pull maybe one extra G now, which gave us an edge. There was no resistance to wearing them as we understood that wearing them was the same as making the airplane better."

On his final "combat" mission, he and Yeager took off on their own, flew all over France, and dropped their tanks on Mount Blanc in Switzerland. "It seemed like a good idea at the time." Meanwhile the Group shot down 50 German planes that day.

Anderson stayed with the USAF after the war, as a test pilot for many years; he spent a lot of time on a project that, in retrospect, seems a little nutty. But the idea was for a fighter to attach itself, wingtip-to-wingtip, to a big bomber, and essentially get a free ride. The concept had some validity, but was just too complicated and risky for the actual fuel benefits that could be realized. He also flew F-105s in Vietnam, and retired from the Air Force as a full Colonel. During a 1995 Warbirds air show, on the 50th anniversary of their last combat mission, he and Chuck Yeager got back into the pilot's seat of a Mustang, and flew over the show. Bud did a victory roll over the airstrip. How wonderful!

I like to think that Bud's life-long success, in some small way, helps to 'right the scales' for the sacrifice of those who contributed to the necessary victory of World War Two, but did not survive to enjoy it.