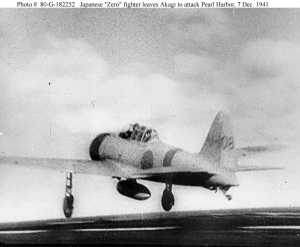 Early in the Pacific War, the Americans thought they were facing a "wonder weapon," the Japanese A6M2 Zero, the main fighter plane of the Imperial Japanese Navy (IJN) in 1941. It flew rings around the American fighters of the time - Brewster Buffalo's, Bell P-39's, and (to a lesser extent) Grumman F4F Wildcats. The Zero pilots were superb; their machines were light, fast, and maneuverable. Overcompensating for their previous, negative stereotypes of the Japanese as imitative "little yellow bastards," the American fliers regarded the Zero with too much respect, even awe. In fact, the Zero was a very good aircraft, but one with distinct weaknesses.

Even before the First World War, the Japanese military leaders recognized the need to develop an industrial base, on which to build their weapons capability, aircraft in particular. In World War One, they won some key victories, but largely with European-built equipment. In the 1920's both the Army and Navy created air arms, and in the 1930's, Japanese manufacturers, Mitsubishi, Nakajima, and Kawasaki, began producing fighter airplanes locally, prodded by an aircraft self-sufficiency program, headed by Admiral Yamamoto.

As a result, warplanes that had been both designed and built by the Japanese flew over China in the war there in the late Thirties. As the Japanese Army Air Force (JAAF) program lagged, these were largely JNAF aircraft used in China, notably the Nell bomber and the Claude fighter. (The use of female names for Japanese bombers and female names for fighters was a convenience of Allied intelligence services in WW2, and, of course were not used by the Japanese. They denoted their aircraft by the year of introduction in the Japanese calendar and purpose. Thus the Nell was a Type 96 land-based attack bomber, the Claude a Type 96 carrier-based fighter, and the Val a Type 99 carrier-based dive bomber, etc.)

The Nell was slow enough that even the motley collection of older, foreign fighter used by the Chinese gave it problems. But, the Claude was good enough to fly escort and could establish local air supremacy. The Claude (Mitusbishi A5M) was designed to operate from carriers, and had a low wing-loading (i.e. relatively large wings) and a strong undercarriage for its tailhook. As the influential JNAF fighter pilots, led by Minoru Genda, demanded a nimble and maneuverable airplane, the rest of the aircraft was as lightly built as possible. The tactical success of the Claude in China, against a foe with weak airplanes and almost no anti-aircraft, led the Japanese to continue the design philosophy of the Claude in its next naval fighter, the Zero.

The Zero was the primary JNAF fighter for the entire Second World War. (Code named Zeke, everyone called it the Zero, as in Type 00 (Zero) carrier-based fighter.)

Built in response to a 1937 IJN spec that called for a carrier-based fighter, that was fast, armed with cannon, as maneuverable as the Claude, had long range, and climbed quickly. Since Japanese industry could only build engines up to 800 hp, the airplane had to be as light as possible. Horikoshi and the Mitsubishi design team came up with a plane that featured a large, one-piece wing made of lightweight aluminum. Fuel efficient, it had a maximum range of 1100 miles, which could be extended with drop tanks. It had clean aerodynamic lines, which made for a plane that was not only beautiful, but easy-to-fly.

The result, the Zero, was outstanding. Armed with two 7.7 mm machine guns and two 20mm cannon, it was considered "heavily armed" at its introduction in 1940. In late 1940, the Zeros dominated the skies over China, with claims for 59 Chinese aircraft destroyed against no losses. This trend continued into 1941, as the Zeros decimated the Chinese opposition, shooting down 45, with only two lost to anti-aircraft fire.

In the early air battles against the Americans and the British, starting at Pearl Harbor on Dec. 7, 1941, the Zero shocked and terrified the Allies. The surprising effectiveness of the Zero was also a testament to the successful efforts by the Japanese to mask their true aerial strength from the West.

But the Zero was not a super-plane. While it was very good, it had weaknesses that reflected engineering trade-offs, Japanese military traditions, and the limitations of Japanese industry.

The Zero's lightness cut both ways; while light weight aided the plane's maneuverability, it also meant that the Zero could not absorb a lot of battle damage; nor could it dive as fast as its heavier American opponents. Also, the lightweight Zero was optimized for low altitude (below 15,000 feet) combat; above that altitude, its controls were less responsive. "Defensive" features, like armor-plating, parachutes, and self-sealing gas tanks were considered not worth the extra weight. The traditional Japanese orientation toward the attack disregarded the losses that might result from the omission of these components. As experience showed, the Zero was a flying incendiary. A few good hits in the gas tank, and the whole aircraft would explode in a ball of flame.

In the all-important matter of weaponry, the Zero's limitations could also be seen. In that era, fighting airplanes carried light machine guns (7.7mm or .30 caliber), heavy machine guns (12.7mm or .50 caliber), 20mm cannons, or some combination of these. It's important to note the relatively huge differences in the projectile size (and hitting power) of these different guns. Roughly speaking a .50 caliber slug weigh three times as much as a .30 caliber, and the 20mm was three times heavier than the .50 caliber. But, the larger the gun, the less ammunition that could be fired and the slower the rate of fire.

With two .30 caliber machine guns and two cannon, the Zero's designers sought a compromise. But perhaps the American designers made a better compromise in their selection of six .50 caliber machine guns. Too often, the Zero's light machine guns could not damage the rugged U.S. aircraft, and the slow-firing cannons couldn't find the mark. The great Japanese ace Saburo Sakai found this out over Guadalcanal, as he related in Samurai!

I closed in from the best firing angle, approaching from the rear left of the Grumman [F4F Wildcat], the pilot appeared to realize that he could no longer win. He fled at full speed toward Lunga.

I had full confidence in my ability to destroy the Grumman, and decided to finish off the enemy fighter with only my 7.7mm machine guns. I turned the 20mm cannon switch to the 'off' position, and closed in.

For some strange reason, even after I had poured about five or six hundred rounds of ammunition into the Grumman, the airplane did not fall, but kept on flying. I thought this very odd - it had never happened before - and closed the distance between the two airplanes until I could almost reach out and touch the Grumman. To my surprise, the Grumman's rudder and tail were ripped to shreds, looking like an old torn piece of rag.

Sakai's tribute to the ruggedness of the Wildcat reflects mutely on the comparative flimsiness of the Zero.

Japan's industrial weakness also manifested itself in the Zero's production. As it was technologically advanced, it required a lot of handwork and sub-contracting to smaller shops. In the three years 1939-42, Mitsubishi made 837 Zeros, in the next 12 months 1,689. And from April 1943 - March 1944, almost 3,500. While good, these numbers did not match U.S. volumes, nor the demands of the battlefields.

Later Army fighter. Only Japanese fighter of the war powered by an in-line engine. Code named "Swallow." The Tony was one of the few examples of German-Japanese technical cooperation in the war. Via submarine, Germany sent blueprints and two working examples of its excellent Bf109, including the DB 601A engine. Modified for Japanese production, the Ki61 emerged, a good fighter in theory, but which always bedeviled the Japanese in their attempts to build it in numbers, build it reliably, and maintain it in the field. The JAAF deployed the Tony to Rabaul and then to New Guinea. One-on-one, a well-maintained Ki-61 Tony, with a good pilot, could threaten any U.S. fighter. But difficulties with production, maintenance, and pilot training made that the exceptional case.