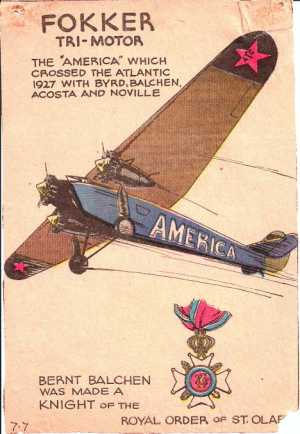 Long-range aircraft of the 1920s

The sub-zero Arctic wind penetrated the unheated, ungainly, three-motor airplane taking off from Spitsbergen. Inside, navigator Richard Byrd, an ambitious U.S. Navy Commander, and pilot Floyd Bennett struggled to keep warm in their furs. They reported that they reached the North Pole on May 9, 1926, a claim which many have questioned.

Their airplane, the Fokker Trimotor, seems always to have been involved in various controversies. It was designed and built by the brilliant and opportunistic Anthony Fokker, a Dutch engineer, who perfected the
synchronized machine gun for the Germans in World War One, and after the war, promptly began doing business in America.

The origin of the Fokker Trimotor F.VII, lay in the F.2. A high-wing monoplane with a fully enclosed cabin, the F.2 was revolutionary in 1920.

By 1926, the Fokker F.VII Trimotor had emerged: 49 feet long, with a wingspan of 63 feet, it weighed 6,8000 pounds empty (less than two modern Ford Explorer SUVs). It was constructed of mixed materials: metal tubing, fabric for the fuselage, and  wooden wings. Built by Fokker's company, Netherlands Aircraft Manufacturing Corporation, at a cost of $40,000 each, altogether 42 were built. Powered by three Wright Whirlwind, 200-horsepower radial engines, the Trimotor's top speed was 118 MPH. Configured to carry 2-pilots and 10-passengers, it could fly as far as 1,600 miles (at cruising speed, under good conditions).  Because of its long range  for the time, many long-distance aviators of the late 1920's used the Fokker Trimotor on their transoceanic, transcontinental, and polar flights. The variant produced for the US Army was the C-2.

Byrd's plane on his Arctic flight, nicknamed the "Josephine Ford," for sponsor Edsel's daughter, bore the word "FOKKER" in huge letters on wings and fuselage, so that no one would confuse his aircraft for a FORD Trimotor.

In early 1926, Wilkins flew from Fairbanks, Alaska to Point Barrow and back, a flight which required flying over the 11,000-ft Endicott Range. A modified C-2, with a wingspan of 72-ft,  the "Southern Cross" was the first long-wing Fokker produced. It carried 700 gallons of gasoline, 45-gal of oil, enabling the long flight to Point Barrow and then some local aerial exploring. The craft was damaged during three test flights at Fairbanks, but was repaired and ended up in  the possession of Charles Kingsford-Smith, an Australian aviator, known as "Smithy."  Smithy, flying the Southern Cross, on May 31, 1928, took off from San Francisco for Hawaii and then went on to Brisbane, a total of 7,316 miles. The Fokker F-VIIB was tested on the flight by stormy weather and broken navigational equipment, and several times the aircraft came close to going down. But the crew of four made it, and Kingsford-Smith’s became Australia’s greatest aviation hero.

It later flew practically around the world where it became famous from its name Southern Cross. This historic tri-motor is now on display in Melbourne, Australia.

After his 1926 flight over the North Pole, then-Commander Richard E. Byrd, was not happy with simply being the leader of the first flight over the North Pole. In February 1927, Floyd Bennett, Byrd's partner and co-pilot on the North Pole flight, announced the intention to attempt to win the 'Orteig Prize', the $25,000 reward offered for the first successful non-stop flight from New York City to Paris. He and Byrd, with their strong financial backing, seemed heavy favorites.

Byrd picked a familiar  aircraft, the Fokker C-2 monoplane, very similar to the Fokker F.VII used on his Arctic flight. The C-2 had three reliable 220hp Wright J-5 engines, the necessary range and plenty of room for scientific instruments. During a test flight on April 16, 1927,  the America crashed on take-off at Hasborough, New Jersey, injuring three of the four aboard.  Byrd fractured his wrist, Bennett suffered a broken leg and collarbone, and serious head injuries; George O. Noville, the plane's flight and fuel engineer, endured an operation to remove a blood clot. With Bennett hospitalized, Byrd was sought a replacement, delaying the anticipated flight.  At Tony Fokker's suggestion, Byrd selected Bernt Balchen, a Norwegian test pilot, and former member of Roald Amundsen's airship expedition to the North Pole.

On May 11th, following the disappearance of  Nungesser and Coli, the Byrd group announced a delay until the French fliers' fate could be determined.   Not long thereafter Lindbergh stole a march on them, and took off for Paris on May 20, 1927, landing 33 hours later, claiming the Orteig Prize and world renown.  Making the best he could of the situation, Byrd noted the valuable training and scientific experience to be gained in a transatlantic flight, and continued his preparations.

Early on June 29, 1927, the "America" took off from Roosevelt Field for Paris,  with a crew of 4 under the command of then-Commander Richard E. Byrd.  Also aboard were Bert Acosta and Bernt Balchen as relief pilots and Lieutenant George O. Noville.

While Byrd had delayed take-off awaiting ideal weather, the flight was marred by terrible flying weather.  Off Newfoundland, Acosta accidentally lost control of the aircraft, sending her down towards the sea.  A last-moment correction from Balchen saved the ship and crew from the cold waters. On another occasion, Noville's feet became tangled in the wiring of the radio set. Through rainy clouds and strong winds, the "America" flew east, with Byrd scribbling repeatedly in his diary, "Impossible to navigate". At regular intervals, the plane's position was tracked, but as the plane approached France, the compass begun to malfunction.  After a flight of over forty hours, the airplane reached Paris, but could not land due to heavy fog, even after 6 hours.  Balchen flew the plane 150 miles back to the west and, low on fuel, forced a water landing 300 yards off Normandy. The monoplane sunk and settled in the water up to its wings, but Balchen saved the lives of the crew, who rowed to shore in a rubber life raft.

The French Navy secured the airframe with several boats, and hauled the "America" closer to shore, whereupon souvenir hunters  quickly stripped the fuselage down to its steel frame. The three engines were recovered to prevent further damage from saltwater. The crew remained in the village of Ver-sur-Mer for one night and left for Paris the next day.  The French people  welcomed and honored the four-man crew; Byrd was named to  the Legion d'Honneur of France.  Back in America, both Byrd and Noville were also awarded the Distinguished Flying Cross.

The door to the Pacific had opened in June, 1928, with the flight of U.S. Army Air Corps officers Lester J. Maitland and  Albert F. Hegenberger, in a Fokker Trimotor called the 'Bird of Paradise' (identical to Richard Byrd’s America), from San Francisco to Honolulu, Hawaii.  Maitland and Hegenberger could not put down along the way and had no landmarks to guide them along the twenty-four-hundred miles  of featureless ocean. The successful flight was a tribute to the piloting skills of Maitland, the navigating
skills of Hegenberger, and the reliability of the Whirlwind engines and the Fokker aircraft.

In 1929, Byrd mounted a large expedition to Antarctica with the goal of flying over the South Pole. It is sometimes forgotten that since Amundsen and Scott had made their historic treks in 1911, no one had returned to the Pole in the next twenty year. On this trip, Byrd's team included 80 men, dozens of dogs, and three airplanes, including a Fokker Trimotor, the "South Pole."  Bernt Balchen again accompanied him, but the aircraft met an ignominious end, being wrecked in a windstorm. Byrd and Balchen flew over the South Pole in their Ford Trimotor on November 29, 1929.

The U.S. Army Air Corps bought three trimotor aircraft from Fokker in 1926, designated the Fokker C-2, essentially an improved version of the F-VIIA, including upgraded 220-hp Wright J-5 engines. (Shown at left.) One was converted to an airborne radio test lab. Various communications and navigation equipment was installed. (Also pictured.)