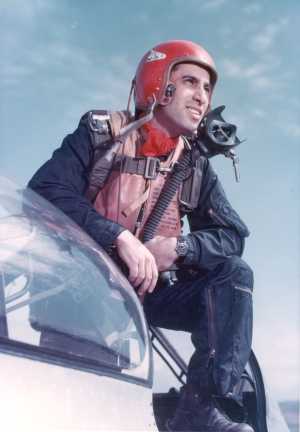 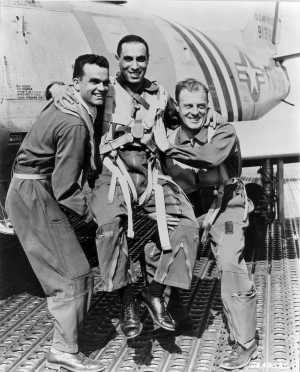 James Jabara being hoisted in celebration 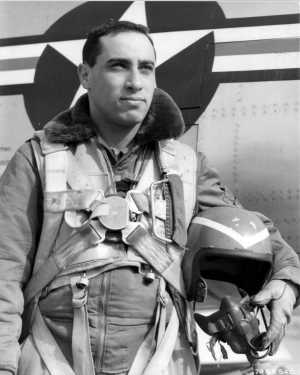 With family roots in the village of Merjayoun, Lebanon, standing only 5 feet, 5 inches tall, and needing to wear glasses, James Jabara was an unlikely candidate to become a hotshot American fighter pilot. But he was, and he was one of the hottest, his country's first jet ace, and a triple ace in Korea.

In the Air Force community, if not to the American public, he was a legend. One night in 1953, a young pilot was ordered to fly Jabara into his base.

He zipped out in a T-33 and picked up his famous passenger, who promptly stowed his gear in the way of the ejection seat and lit up a cigar. But the young pilot didn't object.

Flamboyant and successful hotshots like Jabara could still disregard the rules in those days, when what you did in the cockpit counted more than what you did behind the desk. As John Sherwood explains in his excellent book about the USAF jet pilots in Korea, Officers in Flight Suits:

"This was 'flight suit attitude', ... a sense of self-confidence and pride that verged on arrogance ... the aircraft of preference was the high-performance, single-seat fighter ... This culture placed a premium on cockiness and informality. A flight suit officer spent more time in a flight suit than in a uniform. In his world, status was based upon flying ability, not degrees, rank, or officer skills." A fascinating book on the Korean War fighter pilots, check it out at Amazon.com.

Born in Muskogee, Oklahoma on October 10, 1923, and raised in Wichita, Kansas, Jabara reflected the hard work ethic and patriotism typical of first-generation Americans. He worked in his family's grocery store and earned the rank of Eagle Scout. In World War Two, he entered officers' flight school as a teenager and earned his wings in 1943. He flew over 100 combat missions in a Mustang, with the 363rd Fighter Group, (9th Air Force) over Europe. He was credited with 1.5 kills in the summer of 1944, earning him a Distinguished Flying Cross. An Oak Leaf Cluster was added to it in 1945. After the war, he attended Tactical Air School at Tyndall Air Force Base. He qualified on the F-80 in 1948 and the U.S. Air Force's latest fighter F-86A in 1949, and was assigned to the 4th Fighter Interceptor Wing (4th FIW)

The 4th FIW, equipped with the new F-86A Sabre jet, began operating in Korea in December 1950. The 334th Fighter Interceptor Squadron (334th FIS) of the 4th FIW had been flying from Kimpo, South Korea in early 1951. From there the F-86s didn't have enough range to fly any further than Pyongyang. Then in March, 1951, the 334th FIS moved northward to Suwon, permitting its F-86s to fly up to MiG Alley and the Yalu River. Captain Jabara, flying with the 334th FIS, racked up his first kill in April 3, 1951, during a big air battle in which three MiGs were downed. Jabara added a second a few days later.

On April 12, he was involved in one of the biggest aerial melees of the Korean War. Some 48 B-29s from the 19th, 98th and 307th Bomb Groups went against Antung and the Sinuiju bridges. F-84 Thunderjets of the 27th FEG served as screen while F-86 Sabres of the 4th FIG provided high cover. Over 70 MiGs jumped American air forces. In the ensuing battle, altogether 10 MiGs were claimed: 4 by F-86 pilots: Jabara, Lt. Col. Bruce Hinton, Capt. Howard Lane, and Col. John Meyer, and 6 more by B-29 gunners. But the cost was heavy - three B-29s went down; more were turned back with heavy damage. By the 22nd of April, Jabara had shot down four MiGs and was the leading American scorer. As the 334th rotated to Japan, Jabara was temporarily assigned to the 335th, so he could get a chance at making ace.

On May 20, 1951, the 4th FIW flew a standard fighter sweep over Sinuiju, four flights of six ships hoping to lure the MiGs up for a dogfight. About 27,000 feet over Sinuiju, they made contact with the MiGs and Lt. Col. Ben Emmert, leading the two "Awning" flights ordered "Drop tanks!" Just like the P-51s and P-38s of World War Two, the F-86s needed to lose their tanks for maximum combat speed and maneuverability. Standing orders required any Sabre pilot to head for home if he couldn't shake his tanks. (The lesson of Tommy McGuire had been well learned.)

Captain Jabara punched out his tanks but only the left one dropped away. The right tank held fast. Disregarding orders and his Sabre's impaired capabilities, he engaged the MiGs in a head-on pass without any hits. As turned to pursue, his wingman called out three more MiGs behind him. Turning as tightly as the Sabre and his consciousness would allow, he got behind a MiG and started a turning duel. At 25,000 feet he found the range, opened up, and ripped into the MiG fuselage and left wing with a deadly hail of .50 caliber fire from his six Brownings.

The MiG-15 flamed, snap rolled, and dived down; Jabara watched in fascination. About halfway down, the Communist pilot bailed out a few seconds before his plane exploded. Anxious to confirm his kill, Jabara also dived down low enough to photograph the descending pilot with his gun camera.

Above, the battle raged - as 50 MiGs swarmed around 28 Sabres. As he roared back up to altitude, he lost track of his wingman, but soon found six MiGs. He latched onto the tail of the trailing aircraft. Despite violently evasive maneuvers, the MiG pilot couldn't shake Jabara, who fired two bursts. One went high, but the other caught him in the fuselage. The plane began to pour smoke and lose altitude. As Jabara followed his second victim down to 6,000 feet where the Soviet plane broke up. Suddenly the other MiGs turned the tables and began firing at Jabara. Again the hung tanks impaired his Sabre's flying ability, and the MiGs closed in. As their gunfire hit home, it sounded to Jabara like a popcorn machine running right next to him in the cockpit. His wingman, having his own problems, couldn't clear his tail. Jabara dodged and twisted his sluggish F-86.

From above, two F-86s spotted Jabara's single F-86, obviously in serious trouble. After a brief radio call, the two Americans cleared the MiGs from his tail, and the three headed back to base at K-13. Now credited with six kills, he was the first jet-vs.-jet ace in history (the German Me-262 jet aces had scored on prop-driven planes). Col. John Meyer, CO 4th FIW, awarded him a DFC and promptly chewed him out for getting into combat with a hung tank.

The release of Soviet records in the 1990's has permitted us to get a look at the other side of American claims. I received the following e-mail from Sr. Diego Zampini, an Argentine expert on the Korean Air War:

It is highly likely that Captain James Jabara did NOT become the first Korean War ace and the "First jet-vs-jet ace" on 20 May 1951. According to an article written by two Russian historians, Leonid Krylov and Yuri Tepsurkayev, Three out of One Thousand, only four of his victims to that date could be confirmed.

All three MiG kills claimed by USAF Sabres on 3 April 1951 were confirmed by Russian sources (So, Jabara’s first kill is fully confirmed).

Regarding 20 May 1951 his first kill of the day is fully confirmed. His victim was Captain Nazarkin (196 IAP, 324 IAD). His second combatant escaped, seriously damaged, but he escaped.   So his score by the end of 1951 was only four.   Additionally, the MiG-15 pilot who attacked Jabara was Sr. Lt. V.N. Alfeyev (196 IAP, 324 IAD) who also reached ace status, with 7 kills - including Jabara. Evidently the US pilot left the aerial battlefield so damaged that Alfeyev sincerely thought that he shot him down.

There is no doubt that Jabara became a high-scoring ace in his second tour in 1953, nor that he was an outstanding fighter pilot, but unfortunately he wasn’t the first Korean War ace nor the "First jet-vs-jet ace."   Check out the article Three out of One Thousand, in the www.korean-war.com site.

At the time, he was lauded at the Korean War's first ace. The Air Force brass ordered him home, where he experienced a brief celebrity: pictures in the newsreels, parade in Wichita, and newspaper interviews. He then began training other fighter pilots at Scott AFB in Illinois.

But Jabara "always liked excitement" and was back in Korea by early 1953. He continued shooting down MiGs. On May 26, with the 334th FIS, he was leading a flight of four Sabres when he spotted 16 MiGs over the Yalu. Leading his flight into the enemy jets, he scattered them, and then went after a couple laggards. He shot one down and forced the other into a terminal spin, thus scoring his 8th and 9th victories. By the end of June, he had run his tally to 14, and he shot down his 15th, and last, MiG on July 15, 1953. He was the second-highest scoring American ace of the Korean conflict.

Later promoted to Colonel, he was on his way to a combat assignment in Vietnam in 1966. But on November 17, 1966, he and his daughter were killed in the Volkswagen she was driving. He was 43. Sources: