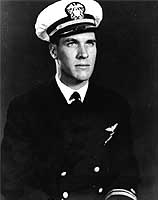 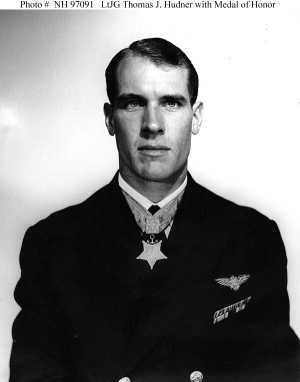 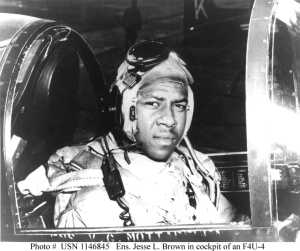 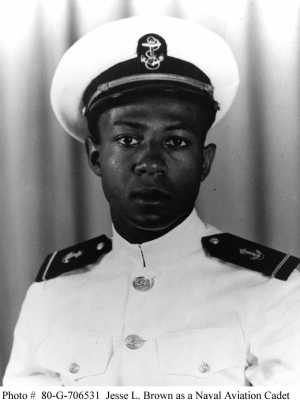 Jesse Brown, as a Midshipman and Naval Aviation Cadet 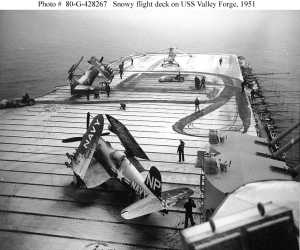 US Navy Corsair Pilots, Heroes of the Korean War

Flying one thousand feet above the icy Korean mountains, the Corsair's engine cut out. At such a low altitude, the pilot, US Navy Ensign Jesse Brown, couldn't bail out or clear the mountain. He spotted an opening that looked more or less flat, and in any case, it was his only choice. A wheels up, dead stick landing. The Navy's first African American aviator probably thought that he had been through worse than this, being hazed and harassed throughout his pioneering Naval career.

The F4U went down heavily and smashed into the rough terrain, folding up at the cockpit. Sliding through the deep snow, the big fighter started smoking immediately.

Lt. (Jg) Thomas Hudner and the other VF-32 pilots studied the situation on the ground as they circled overhead. This close to the Chosin Reservoir, Chinese Communist soldiers would be along soon. The crashed and burning aircraft was a hopeless wreck. At first the Navy fliers thought that Ensign Brown was dead. Then his wingman and roommate, Lt. William H. Koenig, noticed Brown waving to them through the open canopy of his Corsair (Bureau # 97231). A rugged, prop-driven, big-nosed WWII design, the Chance Vought F4U normally could take a lot of damage. On this day, 4 December 1950, Brown had been tragically unlucky; some North Korean flak gunner had hit the plane in a vulnerable spot.

Flight Leader Richard L. Cevoli radioed "Mayday" and called for helicopter rescue. A Sikorsky HO3S helicopter was dispatched, but would take at least 15 minutes to reach the stricken flier. Lt. Hudner looked down at his friend and flying mate. He promptly decided to go down and try to pull Brown out the smoldering aircraft. Hopefully, both pilots could then escape on the chopper.

Hudner made one more tree-top pass and dumped his remaining fuel and ordnance. He dropped flaps and tailhook, and thumped the Corsair onto the ground. He hit a lot harder than he had expected. At 6,000 feet above sea level, the Corsairs' air speed indicator had understated the actual speed. Hudner began to wonder if this had been such a good idea.

"I knew what I had to do," said Hudner in an interview by Frank Geary, for Jax Air News, the Naval Air Station Jacksonville, Fla., base newspaper. "I was not going to leave him down there for the Chinese. Besides, it was 30 degrees below zero on that slope, and he was a fellow aviator. My association with the Marines had rubbed off on me. They don't leave wounded Marines behind." Hudner tightened his harness and, with his wheels up, set his Corsair down onto the snow and rocks some 100 yards from Brown's smoking aircraft. "He was alive, but barely, when I got onto his wing and tried to lift him out of the cockpit. But his right leg was crushed and entangled in metal and instruments. I hurried back and requested a rescue helo, making sure it would bring an ax and a fire extinguisher. When I got back to Brown, I began packing snow around the smoking cowling. "When a two-man Marine helicopter arrived with only its pilot, the ax he carried proved useless in our efforts to hack away the metal entrapping Brown's leg. He was going in and out of consciousness and losing blood. "The helo pilot and I, in our emotion and panic, and with the light of day fading, discussed using a knife to cut off Jesse's entrapped leg. Neither of us really could have done it, and it was obvious Jesse was dying. He was beyond help at that point. The helo pilot said we had to leave. Darkness was setting in and we'd never get out after dark," said Hudner. "We had no choice but to leave him. I was devastated emotionally. In those seconds of our indecision, Jesse died."

He was born in Fall River, Massachusetts on 31 August 1924, and attended the prestigious prep school, Phillips Academy in Andover. After graduation from the US Naval Academy in 1946, Hudner served aboard USS Helena off the China coast as a signal officer before being assigned to CINCPAC staff for a year in Pearl Harbor. Bored with his job, he applied for flight training at. In April 1948 he entered Naval flight training at NAS Pensacola, Florida. Advanced flight training in the F4U-4 Corsair followed at NAS Corpus Christi, Texas, where he received his "Wings of Gold" in 1949.

He was born on 13 October 1926 in Hattiesburg, Mississippi. He grew up in Hattiesburg, the son of a sharecropper. Brown wanted to attend Ohio State University, in part because the famous Olympic athlete, Jesse Owens, had gone there. Despite advice that he select a Negro college, he applied and was accepted to OSU. While at OSU, and later at Pensacola, he encountered racist resistance to an African-American studying aeronautics and aviation. Nonetheless, of 100 candidates who started the program at Pensacola, he was one of only six to complete it.

He enlisted in the U.S. Naval Reserve on 8 July 1946, and on 15 April 1947 he accepted an appointment as a midshipman in the U.S. Navy. He attended the Navy pre-flight school in Ottumwa, Iowa, followed by flight training at Pensacola and Jacksonville, FL.

In 1948, Brown began a tour of duty with VF-32 at Quonset Point, Rhode Island, and was commissioned an Ensign on 15 April of that year. About a year later, Brown met a new pilot named Thomas J. Hudner, a graduate of Phillip's Academy and the US Naval Academy, and also the son of successful Massachusetts business owner.

Brown and Hudner were soon flying together. Despite Lieutenant (Junior Grade) Hudner's higher rank, Navy policy set flying assignments based on experience, and Ensign Brown had more hours. Hudner was assigned to be Brown's wingman and found Brown a patient and disciplined pilot. But off duty, the two aviators didn't socialize much. In the early Fifties, all the bachelor officers hung out at the Offciers' Club. Brown was married, and like most of the married officers, spent his free time with his family. In June 1950, VF-32 was operating from USS Leyte (CV-32) in the Mediterranean on a routine cruise but was soon diverted to the Korean peninsula when the war started. In October 1950, Leyte joined Fast Carrier Task Force 77 in support of the United Nations Forces in Korea. Soon Hudner and Brown were flying F4U-4 Corsair missions from Leyte.

As a pilot of Fighter Squadron 32, Ensign Brown became a section leader and received the Air Medal for daring attacks against the enemy at Wonsan, Chongjin, Songjin, and Sinanju. Leading his section in the face of hostile anti-aircraft fire, he courageously pressed home attacks that inflicted heavy losses on the enemy and provided effective support for friendly ground troops.

On December 4, both pilots were part of a formation of eight Corsairs flying armed reconnaissance patrols near the Chosin Reservoir. "We'd fly around and look for targets of opportunity," Hudner said later. "We didn't have predesignated targets, but if we saw military equipment, trucks, or troops, we'd destroy them with rockets or our .50-caliber guns. We were high enough to see fairly well ahead, but low enough to see objects and people on the ground. It was very mountainous in that area and we didn't want to go too low. A lot of our planes came back to the ship with small-caliber holes in the wings and fuselage."

Hudner and Brown were at about 1,000 feet when Brown radioed that he was losing oil pressure. "We think it was an oil line that got hit-somebody just got a lucky shot," Hudner said. He crash-landed his plane alongside the wreckage of Ensign Brown's aircraft in a heroic rescue attempt. Despite Captain Hudner's efforts, Brown perished in the wreckage of his plane.

The next day four Corsairs from Leyte flew over Ensign Brown's plane, and in tribute to a fallen comrade, napalmed the wreckage. The location is Latitude 40 degrees, 36 minutes N; Longitude 127 degrees, 6 minutes East. He was posthumously awarded the Distinguished Flying Cross for his exceptional courage, airmanship, and devotion to duty in the face of great danger.

On April 13, 1951, President Harry Truman presented Hudner with the Medal of Honor in a simple ceremony that included Daisy Brown, Jesse Brown's widow. Despite their different backgrounds, Hudner and Brown had been drawn together by a simple, but powerful brotherhood-a bond graced by a singular and courageous act.

For conspicuous gallantry and intrepidity at the risk of his life above and beyond the call of duty as a pilot in Fighter Squadron 32, while attempting to rescue a squadron mate whose plane struck by antiaircraft fire and trailing smoke, was forced down behind enemy lines. Quickly maneuvering to circle the downed pilot and protect him from enemy troops infesting the area, Lt. (j.g.) Hudner risked his life to save the injured flier who was trapped alive in the burning wreckage. Fully aware of the extreme danger in landing on the rough mountainous terrain and the scant hope of escape or survival in subzero temperature, he put his plane down skillfully in a deliberate wheels-up landing in the presence of enemy troops. With his bare hands, he packed the fuselage with snow to keep the flames away from the pilot and struggled to pull him free. Unsuccessful in this, he returned to his crashed aircraft and radioed other airborne planes, requesting that a helicopter be dispatched with an ax and fire extinguisher. He then remained on the spot despite the continuing danger from enemy action and, with the assistance of the rescue pilot, renewed a desperate but unavailing battle against time, cold, and flames. Lt. (j.g.) Hudner's exceptionally valiant action and selfless devotion to a shipmate sustain and enhance the highest traditions of the U.S. Naval Service.

Lieutenant (j.g.) Hudner flew 27 combat missions from the Leyte during 4 months of brutal Korean winter in late 1950 and early 1951.

Following his combat tour, he pursued an outstanding career in US Naval Aviation:

Captain Hudner retired from the Navy in 1973, and was commissioner of veterans affairs for the state of Massachusetts.

In 1973, the United States Navy honored Ensign Brown by naming a frigate after him, the USS JESSE L. BROWN (FFT-1089). Captain Hudner stood beside Daisy Brown when the ship slid down the ways.

In 1994, it was decommissioned and sold to Egypt. Brown’s flying companion, retired Capt. Thomas Hudner, decried the sale and the neglect of Brown’s story, saying, "We need everything we can in race relations."