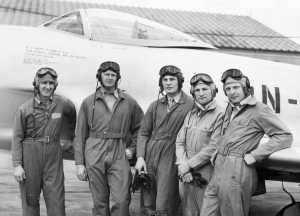 Ace in WWII and Vietnam

An "Army brat," born in Honolulu, Hawaii on 14 July 1922, Robin Olds attended West Point and graduated in 1943. He immediately joined the 479th Fighter Group, the only Group in the Eighth Air Force still equipped with the P-38. Arriving in England in May, 1944, Olds scored his first kills on August 14.

Flying a P-38J, "Scat II," on a low-level mission over Montmirail, he spotted two bogeys far in front of him, heading to his right, about 200 feet off the deck.

He pulled behind them and ID'd them as FW-190's. At 400 yards behind the trailing plane, he fired a six-second burst, hitting the left wing and then pulling his gunfire onto the fuselage. Big pieces flew off, flame and smoke poured out, and the airplane rolled off to the right. Turning his attention to the second plane, he did not see the first one hit the ground. As the second plane pulled a full 360 turn, Captain Olds stayed with him. From dead astern, he fired a five-second burst and observed many hits. The Focke Wulf zoomed up and the pilot bailed out. Eleven days later, over the city of Rostock, Olds downed three Bf-109s, making him an ace, the last P-38 ace of the Eighth Air Force.

After his group re-equipped with P-51 in the fall of 1944, Olds scored again on October 6. He did not score again until February 9, 1945, when flying P-51D #4472922 SCAT VI, he used the new K-14 gunsight to get a Bf-109 over Magdeburg. Now Major Olds, at some 450 yards from his target, he let the K-14 calculate the deflection and fired, surprising himself somewhat when his first burst hit the German fighter. He closed in and fired twice more, his third burst sending the Messerschmitt down, his seventh victory.

Over Berlin on Feb. 14, he scored two more and on March 19 two more - a Bf 109 and an Fw 190. On April 7, while escorting some B-24's over Duneberg, he spotted contrails that had to belong to some Me 262 jets. He dived down on them and fired a long-range burst, with little effect. Closer to the bombers, he had more success against a Bf 109, his last kill of WWII. By the end of his tour he was commander of the 434th.

In February 1946 General Olds started flying P-80 jets at March Field with the first squadron so equipped. In October 1948 he went to England under the U.S. Air Force Royal Air Force Exchange Program and served as Commander of No. 1 Fighter Squadron at RAF Tangmere. The squadron was equipped with the Gloster Meteor jet fighter.

He did not fly combat during the Korean War. From 1955 to 1965 he commanded two wings in Europe and in September 1966 took over the 8th Tactical Fighter Wing at Ubon, Thailand. Entering the air war over North Vietnam as a 44-year-old colonel, he flew an F-4C Phantom II named "Scat XXVII".

Olds planned and led "Operation Bolo," a fighter sweep against NVAF MiG-21s on 2 January 1967. He shot down one MiG-21 that day and added another MiG over Phuc Yen Airfield on 4 May. Two weeks later, on the 20th, he destroyed two more MiG-21s.

He returned to the United States in December 1967 and served as Commandant of Cadets at the U.S. Air Force Academy through January 1971. General Olds assumed the position of Director of Aerospace Safety in the Air Force Inspection and Safety Center at Norton Air Force Base, Calif., in February 1971. He retired to the ski slopes of Steamboat Springs, Colorado on 1 June 1973. General Olds passed away on June 14, 2007.

Aerial Victories: 16 confirmed (12 in WWII and 4 in Vietnam) and one damaged.

Mustang Aces of the Eighth Air Force, by Jerry Scutts

P-38 Lightning Aces of the ETO/MTO, by John Stanaway