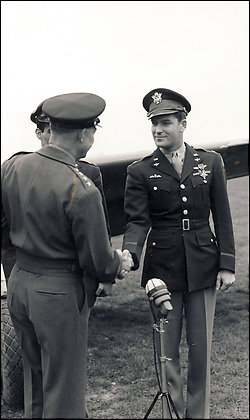 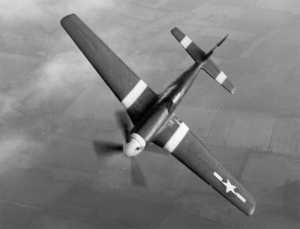 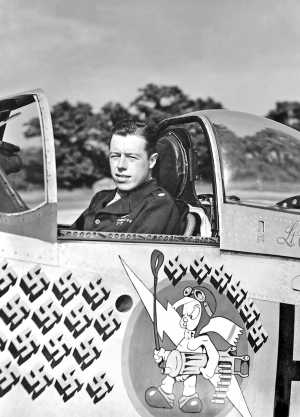 In Jan. 2001, I received the following comment from Johnny McAlister, who flew P-51's with the 370th and was friends with Ray Wetmore.

That's an interesting article. I did know Ray Wetmore. He was considered the hottest pilot in the outfit. The thing I remember most about Ray was his eyesight. Several times on a mission he would come on the radio having sighted some planes on the ground, or some "bogeys," or the bombers that we were supposed to be rendezvousing with, or something and the rest of us couldn't find what he was looking for several minutes. Whereas 20/20 is perfect vision Ray reportedly had 20/15 vision.

The story about Ray and Rudy York (Lt. Robert York) sounds a little exaggerated to me, as the Group Public Relations Officers often did when writing for the hometown newspapers. Ray didn't live through 2 combat tours being stupid enough to jump 100 German planes. And the story goes on saying that 2 more groups of Germans of 100 ships each showed up. Not very likely! Incidentally I roomed for a time with Rudy York. He was about 5'4" and built like a weightlifter.

Speaking of the PR guys writing for the hometown newspapers, there was an article in the Greensboro paper which told about me on a strafing mission: "While seeking targets of opportunity in the Ruhr Valley Lt. McAlister did so and so." (I've forgotten exactly what I was supposed to have done) That's hilarious. The flak and other ground fire was so concentrated and intense in the Ruhr Valley that we wouldn't have been strafing anywhere near it. Not in a million years! We didn't even like flying over the Ruhr at high altitude. I've got that article somewhere, I think.

It stirred up some old memories tonight!

I was delighted to have Mr. McAlister bring me back to reality. I don't recall where I picked up that story. But I apologize to all the folks who read it without the benefit of his sidebar.

Aces of the Eighth Air Force in World War Two

In the European Theater, ETO, the U.S. Eighth Air Force started bombing Germany heavily in 1943. In that year, the first American Fighter Groups - the 4th, 56th, and 78th arrived, and their fighter pilots flew P-47 Thunderbolts. They shot down many enemy aircraft, and when properly handled, the "Jugs" more than held their own in aerial combat against the German Fw-190s and Bf-109s. Many 8AF aviators became aces flying P-47's.

But the bombers needed fighter planes to escort them all the way, into the heart of Germany. When the P-51 Mustangs began to fly combat missions in early 1944, they proved that they could do it all: they could fly all the way to Berlin and back, they could fly faster and out-dogfight the German fighters. Thus Herman Goering's famous comment: "When I saw Mustangs over Berlin in March, 1944, I knew the jig was up."

Following are the stories of many of the highest scoring P-47 and P-51 aces of the ETO, including some from the 354th Fighter Group, which, to be precise, was part of the Ninth Air Force.

Also, be sure to take a look at the Clark Gallery, a collection of high quality photographs, donated to this website, by the family of 1st Lt.  James Clark, a pilot with the 56th Fighter Group.  There are many pictures of Clark, Gabreski, and other pilots, as well as scans of a few contemporary  documents. And, for another dose of reality, read below, where a veteran flier comments on the veracity of a piece of newspaper puffery that found its way onto this site.

(Be sure to read the McAlister email in the sidebar.)

Captain Ray Wetmore flew a Mustang nicknamed Daddy's Girl with the 370th Fighter Squadron of the 359th Fighter Group, based at East Wretham, Norfolk. With 21.25 (22.6?) victories, 16 of them in Mustangs, he was the top scorer of the 359th. Lt. Wetmore scored on May 29, 1944, downing an FW-190 while on a bomber escort mission over Politz. Wetmore served two combat tours, which enabled him to witness the last gasps of the Luftwaffe's once mighty fighter force.

On November 27, he and his wingman, Lt. Robert York, became embroiled in a seemingly one-sided dogfight - the odds were 50 to one! Wetmore quickly called in help when two more gaggles of 100 fighters each were sighted. Unfortunately, the rest of the flight had aborted with engine troubles, so Wetmore and York stalked the massive force alone. When the enemy saw the size of the opposition, the hunters became the hunted. "We had to attack in self-defense." Wetmore said later.

With little choice remaining, the P-51s waded into the fighters, and they quickly reduced the odds by one apiece. A good burst with a 20 degree deflection shot brought Wetmore's second kill. He then turned into the attack of another Bf-109, and the pair twisted and turned as the respective pilots strove for the upper hand. Wetmore finally got the advantage, and shot off all his ammunition, whereupon his foe bailed out. Now defenseless, Wetmore bluffed for another ten minutes before extricating himself from the melee.

He followed this up with another big score on Valentine's Day 1945. Vectored by ground control onto enemy fighters near an aerodrome west of Dummer Lake, he sighted four FW-190s flying in line below him. He dived and shot down the last FW-190 in line. Firing at a second, he saw the pilot attempt to break and dive, but he had no altitude and snap rolled into the ground. Shooting down a third FW-190, Wetmore called to his wingman to take out the last one. Shots were exchanged before a fogged windscreen ruined the pilot's aim, and Wetmore finished off the German. Reforming to attack other FW-190s, a new P-51 joined the fray. Wetmore and the newcomer opened up, and both German pilots bailed out. Wetmore was credited with four downed and one shared.

For his final kill on March 15, he shot down the fourth and last Me-163 Komet to fall to the guns of Eighth Air Force Mustangs. Operating around Berlin, Wetmore spotted two Me-163s and he closed to 300 yards, amazed as he watched one of the rocket-fighters zoom upward. He followed as well as he could, and at 20,000 the Komet's engine flamed out. The Me-163 split-essed and dived, with Wetmore on its tail. As his ASI indicated over 600 MPH, he opened fire at 200 yards. His strikes chopped away part of the German's wing and the pilot took to his chute.

Wetmore was the highest scoring 8th AF ace in 1945. He continued in the USAF after the war, only to die when his F-84 crashed in February 1951.

The third-ranking ace of the 56th Fighter Group, Col. Schilling achieved 22.5 air victories, plus 10.5 destroyed on the ground in his 132 combat sorties. Most of Schilling's victories were against Bf-109 and FW-190 single-engined fighters excepting one Me-110 and one Me-410 twin-engined destroyers. Schilling had 5 air victories in one mission, downing 2 Bf-109s and 3 FW-190s on December 23, 1944 plus multiple victories on four other missions. A P-47 pilot, he flew a presentation aircraft "Hewlett/Woodmere Long Island," decorated with "Hairless Joe," a Dogpatch cartoon character.

To Europe with 62nd FS/56th FG, Jan. 1943. Promoted to Major, C.O. 62nd FS. He participated in the first pre-operational 'circus' over Pas-de-Calais in April 8, 1943. On a late April mission, his plane was hit, knocking out his radio, but he returned without difficulty. He led many missions during this period, such as a fighter sweep over Ypres May 25 and a 'rodeo' of 4 fighter groups on August 23. He was made Group Executive Officer in August 1943.