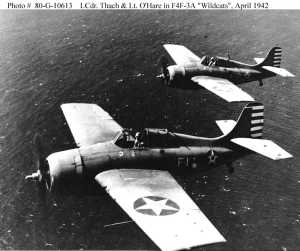 One of the first monoplanes to fly from U.S. carrier decks, the Grumman naval fighter became one of the most successful, in the hands of Butch O'Hare, Joe Foss, Marion Carl, and other great pilots. Grumman's stubby, rugged fighter held the line against the Zeros in the early air battles over Guadalcanal and in the 1942 carrier battles of the Coral Sea, Midway, and the Eastern Solomons.

In pure performance, the Japanese Zero outclassed the F4F, but with its tough construction and well-trained pilots using appropriate tactics, the Wildcat prevailed. Later in the war, the FM-2, an Eastern-produced version of the Wildcat, flew from escort carriers.

In 1936, the US Navy published a requirement for a carrier-based fighter, While the Navy first selected the Brewster F2A Buffalo, it authorized Leroy Grumman's Bethpage, Long Island company to build one prototype, the XF4F-2, as an alternative. Experienced builders of carrier planes, the Grumman designers planned the Wildcat for the challenging take-offs and landings on small, heaving carrier decks. With large wings, situated well forward on the fuselage, the plane had very high lift, permitted quick take-offs, slow landings, and excellent maneuverability. But high lift resulted in slower speed, which could only be improved with a more powerful engine.

Grumman test pilot Robert Hall first flew the XF4F-2 in September, 1937. Powered by a Pratt & Whitney R-1830-66 Twin Wasp, rated at 1,050 horsepower, it achieved 290 miles per hour in test flight. The XF4F-2 featured a cantilever wing set midway up the fuselage, all-metal construction, semi-monocoque construction, mill-riveted skin, four .50 caliber machine guns, and main wheels that retracted into the fuselage. Despite the F4F's speedy performance in a 1938 fly-off at Anacostia, the Navy went with the Brewster.

"On its own hook," Grumman improved the design further with the next prototype, the XF4F-3. The "dash Three" had the more powerful R-1830-76 P&W, larger wings, a better machine gun installation, and (ultimately) a higher-mounted tailplane. With a top speed of 335 MPH, it impressed the Navy, and 78 F4F-3 aircraft were ordered in August, 1939.

An export version of the F4F-3, powered by the Wright Cyclone R-1820, served with the British Fleet Air Arm (FAA), as the Martlet Mark I. Other Martlet versions included the Mark II, Mark III, and Mark IV. They served primarily on escort carriers in the Battle of the Atlantic. Among the notable achievements of FAA Martlet pilots was the downing of a four-engine Fw 200 Condor off Gibraltar in September, 1940.

Based on British combat experience, the next version, the XF4F-4, incorporated:

These add-ons made the "dash Four" heavier and slower than the previous version, which the pilots did not like. But the brass liked the more compact stowage of the folding wings, which enabled more planes to fit in a carrier.

By the time of Pearl Harbor the Navy and the Marine Corps had 131 Wildcats in eleven fighting squadrons. At Wake Island, outnumbered the Marine fliers of VMF-211 fought a doomed battle against the Japanese invaders. Captain Henry T. Elrod of VMF-211, while flying an F4F-3, sank a Japanese destroyer, and subsequently lost his life in the land defense of Wake Island. For his combined actions in defense of Wake Island, he was posthumously awarded the Medal of Honor. In February, 1942, the US Navy struck back; carriers Enterprise, Lexington and Yorktown raided forward Japanese bases. When Lexington was sighted and Japanese Betty bombers came after her, Butch O'Hare shot down five of them in minutes. For this skillful heroism, which likely saved the carrier, O'Hare was also awarded the Medal of Honor.

At the Battle of Midway, the four Navy carrier-based Navy squadrons were still adjusting to the "dash Four" Wildcat. Seven F4F's joined the Buffalo-equipped VMF-221, based on Midway Island itself; the first Japanese air raid on the morning of June 4 decimated the squadron, and VMF-221 was out of the battle. Later that morning, the F4F fighting squadrons from Enterprise and Hornet escorted SBD's and TBD's, but did not provide effective cover for the strike planes when they approached the Japanese carriers. The Yorktown fighters, under Jimmy Thach, made more of an impact, and claimed five kills.

These Navy pilots didn't think all that much of the Wildcat. Jimmy Thach, quoted in Eric Bergerud's Fire in the Sky: The Air War in the South Pacific:

In connection with the performance of the Zero fighter, any success we had against the Zero is not due to the performance of the airplane we fly, but is the result of comparatively poor marksmanship on the part of the Japanese, stupid mistakes made by a few of their pilots and superior marksmanship and teamwork on the part of some of our pilots ...

The deficiency not only prevents our fighter [the F4F] from properly carrying out its mission but it has had an alarming effect on the morale of the fighter pilots in the Fleet at this time and on those who are going to be sent to the Fleet.

Thach and his F4F pilots witnessed the awesome destruction of three carriers in five minutes by the American SBD dive bombers. Later that afternoon, Scott McCuskey and other VF-3 Wildcat pilots flew CAP over Yorktown when the Japanese struck back. Despite claiming 11 Vals, a few got through and crippled the flattop.

When the U.S. forces invaded Guadalcanal in August, 1942, the big prize, the island's strategic importance, was an unfinished Japanese airstrip on the north side of the island. Later that strip would become Henderson Field. Days after the first infantrymen occupied the area, Marine Corps Wildcats landed. In the ensuing weeks and months, those stubby fighters protected the tenuous American hold on the island.

While bloody battles were fought on the ground at Guadalcanal, air power made the difference. Almost every day, Japanese Betty bombers and Zero fighters made the long flight from Rabaul to strike at Guadalcanal. Forewarned by the Coastwatchers and by radar, the F4F's of the "Cactus Air Force" would scramble in time to gain altitude, and then hit the Japanese raiders. In the first few weeks, Major John Smith's VMF-223 flew their Wildcats "into the ground."

The Wildcat was aptly named; it was tricky and unforgiving to fly. Its landing gear was not well-suited to the muddy and dusty conditions of Henderson Field. The controls could be mushy when maneuverability was most needed. There was no way to jettison the hood. The pilot's seat was cramped and too low for optimal visibility. It was not as agile as the Zero. Usually, the F4F pilots tried to zoom through the screening Zeros and go after the bomber directly. With altitude, they could adopt hit-and-run tactics; their rugged construction resisted the Japanese 7.7mm machine gun bullets.


The great Japanese ace Saburo Sakai described the Wildcat in the book Zero:

I had full confidence in my ability to destroy the Grumman and decided to finish off the enemy fighter with only my 7.7mm machine guns. I turned the 20mm. cannon switch to the 'off' position, and closed in.
For some strange reason, even after I had poured about five or six hundred rounds of ammunition directly into the Grumman, the airplane did not fall, but kept on flying. I thought this very odd - it had never happened before - and closed the distance between the two airplanes until I could almost reach out and touch the Grumman. To my surprise, the Grumman's rudder and tail were torn to shreds, looking like an old torn piece of rag.
With his plane in such condition, no wonder the pilot was unable to continue fighting! ... A Zero which had taken that many bullets would have been a ball of fire by now.

Through 1942 and the relatively less intense first half of 1943, the US Navy and Marine Corps relied, by necessity, on the F4F, and 46 of those pilots 'made ace' in the tough little Grumman. Starting in the sumer of 1943, the Hellcat and Corsair replaced the Wildcat in the Naval services' fighting squadrons.

From very early in 1942, it became clear that Grumman would need to focus on the Hellcat program. As part of wartime cooperation, General Motors' Eastern Aircraft Division took over production of the Wildcat. Over the course of the war, Eastern turned out 1,151 FM-1's and 4,777 FM-2's (far more than Grumman ever produced).

At the Battle of Leyte Gulf, FM-2 pilots, flying from escort carriers, distinguished themselves in launching repeated attacks against the Japanese battlewagons, sometimes unarmed!

In 1942, the U.S. Navy captured a Japanese "Rufe," a Nakajima-built A6M2-N on floats, and was asked Grumman to modify a hundred Wildcats into seaplanes. Grumman put an F4F-3 Wildcat on floats and called it F4F-3S seaplane fighter, with the great nickname: Wildcatfish. Unfortunately, the addition of the floats reduced top speed to 250 mph, far too slow to be an effective fighter. By this time, Navy Seabees were building enough airfields to render the seaplane-fighter idea irrelevant.