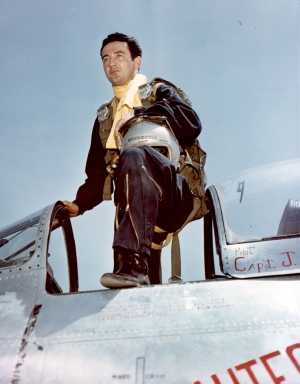 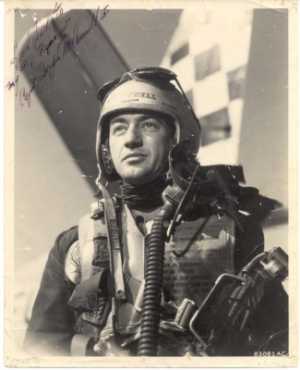 Autographed 'Good Luck to my #1 nephew, Capt. Joseph McConnell III'. Sent to me by Scott Bovard. 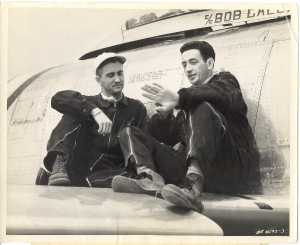 Joe McConnell talking with his hands. 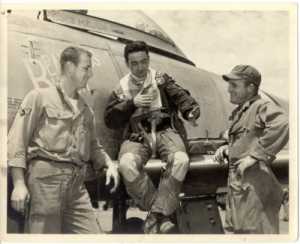 McConnell was one of those who had wanted to fly from childhood. In World War Two, he applied for pilot training, but was designated a navigator, and flew many combat missions over Europe in B-24's, as a navigator.

In February, 1948, he received his pilot's wings from the U.S. Air Force, and applied for service in Korea when the war broke out. At age 28, he was considered too old to be a jet fighter pilot.

But with persistence, 'Mac' finally got an assignment to the 39th FIS, 51st FIW in August, 1952. The 39th Squadron had a proud history, having flown P-39s and P-38s in WW2. For the rest of that year, he flew combat missions, but never bagged a MiG. Like many of the Sabre jet jockeys, he chafed at the restrictions forbidding them from crossing the Yalu River.

But once he 'got on the scoreboard' on January 14, 1953, his results mounted quickly. Within a month, he was an ace.

During that engagement a Soviet MiG-15 pilot, Semen Alexeievich Fedorets (913rd IAP, 32nd IAD), had scored his fifth victory against another Sabre pilot, killing 1st Lt. Robert Niemann. Fedorets spotted McConnell's Sabre, who was chasing another MiG. The Russian pilot smartly managed to put himself on the Sabre's tail, slightly below. Thus, when McConnell's wingman told him to break, he couldn't see Fedorets, who was 'on his six'. Seconds later, Fedorets' lethal burst smashed into McConnell's F-86. Using all his expertise, and despite the damage caused by Fedorets, McConnell forced his Sabre into a high-G barrel roll, causing Fedorets to overtake him. Turning the tables, McConnell fired his 50-caliber machine guns into Fedorets' MiG, forcing him to eject. Mac's own plane was smoking, had lost half its power, and its radio, but McConnell could still control the crippled Sabre.

His opponent described the fight thus:

"My #3 and #4, Aleksandrov and Shorin, lost track of me during my sharp maneuvers, but my wingman V. Yefremov stayed with me. When I was closing to the Sabre I heard Yefremov saying 'A flight of Sabres behind.' He radioed such info and he went away to the left, leaving me alone without cover. As soon as I stopped looking through the gunsight and I turned my head, a short burst struck my cockpit from the right and above.

"I sharply broke to the right underneath the Sabre, getting out of the line of fire. The Sabre went forward, and ended up in front of me at my right. The American pilot turned his head, he saw me and engaged flaps, with the intent to slow down, to let me pass forward and to riddle me at short range. I realized his maneuver, and sharply broke left, while firing a burst at the Sabre without aiming. The burst struck the base of the right wing, close to the fuselage. A huge hole, about one square meter, appeared in the Sabre's wing of the Sabre. It broke to the right and fell downwards. That was my second enemy aircraft destroyed in that combat."

Fedorets was right in one thing: McConnell's Sabre was mortally wounded. But what Fedorets didn't know then was that, even with his F-86F badly shot-up, McConnell still could perform a barrel-roll which put him at 6 o'clock of the now unaware Fedorets. And then he took revenge for his defeat.

"As soon as I got my plane out of the attack, from below I was hit by a machine gun burst. I sharply pushed the stick, and tried to disengage. The cockpit filled of smoke and kerosene, the instrument panel was destroyed, and finally the new couple of Sabres [Fedorets did not know then that it was the same Sabre piloted by McConnell that he had knocked out before.] broke any control. Using the trimmer I leveled the plane, and decided to bail out. With a tremendous effort I was able to eject the canopy, and successfully bailed out of my damaged plane at 11,000 meters of altitude."

McDonnell headed south, toward the water, still smoking, but not burning. Flying #3 position in McConnell's flight, 1st Lt. Harold Chitwood called for air-sea rescue from Chodo. By this time the U.S. air-sea rescue teams were so well-organized that he only spent a couple minutes in the water before a chopper pulled him out. An H-19 helicopter of the 581st AR&C Squadron, manned by Don Crabb and Bob Sullivan, pulled him out. Mac later joked to his sister, "I barely got wet." A few days later, he shot down another MiG.

One of Mac's wingmen later recalled the first time he had flown with McConnell.

They spotted some MiGs and McConnell started shooting at a far distance, the wingman thought to himself "This is the top ace.........firing at the enemy so far away?" It was then that the wing man realized that McConnell knew what he was doing. The bullets were very effective and accurate at altitude. McConnell also used a monocular to spot his enemy as shown in this picture, a classic example of a fighter pilot 'talking with his hands.' Just visible are some letters of "Beauteous Butch," named for his wife.

On May 18, he achieved the feat of downing three MiGs in one day, in the process becoming the first 'triple ace' of the Korean War with 16 victories.

On that morning, McConnell and his wingman, Dean Abbott, started out in a flight of six Sabre jets, but the other 4 planes quickly aborted. McConnell and Abbott chased a couple MiGs, "in hot pursuit," across the Yalu River. McConnell squeezed off a long-range burst and actually scored some hits. Soon more MiGs showed up to help their comrades. One of the arriving MiGs got on Abbott's tail, but McConnell shot him off. The Soviet pilot ejected. A few minutes later, he repeated the performance, for his 15th kill. When Abbott radioed that there must be thirty MiGs, the whole staff back at K-13 overheard McConnell's reply: "Yeah, and we've got 'em all to ourselves." Despite the bravado, the two American pilots twisted and turned defensively, and were happy to get back south of the Yalu. The MiGs didn't follow, and McConnell and Abbott landed at K-13, very low on fuel. Later that afternoon, McConnell went back up, and scored his third kill of the day, his 16th overall.

Gen. Barcus, head of FEAF, didn't want to risk his top ace to any further combat, and is reported to have said, "I want that man on his way back home to the U.S.A. before you hear the period at the end of this sentence." McConnell duly packed his bags and went home. Major John Bolt, USMC, WWII veteran of the famed Black Sheep VMF-214, took over Mac's job as 'D' Flight commander.

Like many hot fighter pilots, he went into flight test. Tragically, he was killed on August 24, 1954 at Edwards AFB while acceptance testing an F-86H. The "H" that he was testing had a complete hydraulic failure. Relying on his experience in Korea, where he had practiced landing with just throttle and rudder many times, McConnell tried this technique. It almost worked, but ground turbulence lifted up a wing. He ejected, but was far too close to the ground.

Hollywood memorialized him in the movie The McConnell Story, starring Alan Ladd, and June Allyson. Before shooting was completed on this film, McConnell was tragically killed in a test pilot accident. A new ending was then written and shot for what otherwise would have been a classic love story with a lot of action.