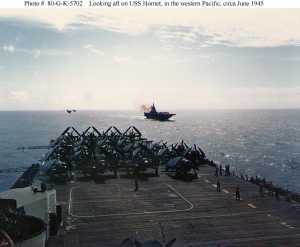 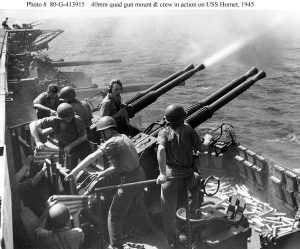 Fighting Two exemplified the American Navy's aerial superiority in the Pacific from late 1943 on. In many ways the squadron was typical of the many outstanding squadrons that we deployed:

It was also the only Fighting Squadron which could claim that one of its pilots helped to shorten the war by two months. See Ensign Tillar below.

Other squadrons and other aces received (and still receive) more attention. VF-15 and its CAG, David McCampbell, shot down a lot more planes. VF-17, The Jolly Rogers, seemed more romantic. Gene Valencia and Cecil Harris shot down over 20 planes, double the score of VF-2's top ace (CO Bill Dean). But VF-2 set one record that will never be broken. Twenty-seven of its pilots became aces. (Personally, I don't think there will ever be even one more ace, but that's another discussion. - SS) And that record is another expression of the leadership of Bill Dean, the teamwork and skill of the fliers, the excellent American airplanes, carriers, and weapons.

Fighting Two 'stood up' on June 1, 1943 at Atlantic City Naval Air Station, under the command of Cdr. Bill Dean, a Naval Academy graduate. The squadron began training for combat in the first new Grumman Hellcats, completing gunnery training at Quonset Point NAS, RI and carrier qualification at Norfolk, VA. It embarked for Pearl Harbor in October.

In Hawaii, its pilots participated in a Marine landing exercise, and so impressed the influential Butch O'Hare, that he requested VF-2 replace VF-6 in his Air Group 6 on Enterprise during the upcoming Gilberts campaign. Under the direction of CAG Butch O'Hare, its pilots participated in the early development of the Navy's night-fighting teams. Ens Warren Skon flew Butch's wing and Lt. Cdr. Dean led the other 3-plane team. Both were flying on the night of Nov. 26, when Butch was lost.

By December, VF-2 had scored 5 aerial victories. In Jauary, 1944, Ens. Connie Hargreaves and six other volunteer "Rippers" went aboard USS Kalinin Bay, an escort carrier, to take part in raids on the Carolines and the Marianas.

To keep the Japanese defenders off balance, Admiral Mitscher launched the first fighter sweep against the Marianas in the afternoon of the 11th, instead of early morning on the invasion day, the 12th, as had been the American habit. At 1300 hours, the carriers turned into the 14-knot wind and launched over 200 Hellcats. They were about 200 miles from their targets of Guam and Rota.

Cd. Bill Dean led his fliers over the Guam airfields when Lt.(jg) Howard Duff went down, a victim of AA fire. Circling over his downed pilot, tryin to guide in the SB2C's to rescue him, Dean didn't see the 30 bandits that bounced his squadron from out of the high overcast. Warned by Lt.(jg) Wolf, Dean and his wingman, Lt.(jg) Park, "chandelled" into their attackers, got the advantage, and promptly downed three of them. Dean shot down another Zero a little later; while the alert Wolf claimed three. The planes of VF-2 involved in this mid-afternoon strike claimed 23 victories.

In the next few days, they struck at the Bonin Islands and Iwo Jima, to destroy any Japanese aircraft there that might be used to attack the Marines landing on Saipan. This day, Cdr. Dean only sent out pilots without any victories, so that they could catch up. They made the most of it, as Lt. Barnard scored 5; Lt.(jg) Noble 3; Lt.(jg) Carroll 3; and four other pilots accounted for 6 more. On June 18, many VF-2 pilots took part in extended searches that went out 380 miles with a 50 mile cross-leg. These searches pushed the limits of the Hellcats and the pilots, as they took five or more hours, and the Hellcats carried a six-hour fuel supply. No one found the Japanese fleet.

On the 19th, the Rippers began searching again, but soon the Japanese came after the U.S. fleet, and the CAP knocked them down.

By dawn of the 20th, they knew they had downed a huge fraction of the enemy's naval aircraft, but so far they hadn't found his carriers. About 1600, a contact was made. The Japanese were 200 miles to the west, a long round-trip flight, especially in the late afternoon. Admiral Mitscher ordered the strike; for maximum punch even the Hellcats carried 500-pound bombs.

In Aces at War, Vol. 4, Connie Hargreaves described his part in the mission.

The pilots of Fighting Two flew out to the sighting area, but no Japanese carriers. The CAG ordered them to press on, beyond the safe turn-around point. Just as the sun was setting the spotted the Jap fleet. There was no aerial opposition, just heavy AA. Bill Dean took his division in first, then Hargreaves' division commenced their dives. After release, they tried to form up, but the darkness was absolute: no moon, no city lights reflecting off the clouds, just their instruments and the running lights of other U.S. planes. The pilots joined up with any 'friendly' fighter. As they flew back to the east, first the dive-bombers, then the torpedo bombers began to ditch as they ran out of fuel.

Hargreaves began to question his navigation, but finally spotted the wakes of the American fleet below. Procedure called for the landings to be made in darkness, with only the dim blue deck lights and the LSO's paddles to guide the planes in. But not many pilots had actually made night carrier landings, and when a number of bombers crashed on landing, Mitscher gave his famous order to "Turn on the lights." With a little more gas than some of the others, Hargreaves circled a little longer. When he got the 'Cut', he landed uneventfully, but was almost killed as the next plane landed poorly, missed Hargreaves plane by inches and knocked another onto a quad AA gun.

It was a somber night in Hornet's ready room, as only six VF-2 pilots gathered there; but many others had landed on other carriers. Others were fished out of the water. It turned out that all of Hargreaves' gang were safe that night, but they lost five aircraft.

When the Fast Carrier Task Force struck Iwo Jima, 140 IJN fighters and bombers came out to challenge them. F6F pilots claimed 116 destroyed. Lt.(jg) Hargreaves shot down four on a single morning sortie; later that afternoon, on CAP, he got another, to become an ace-in-a-day.

07 September 1944 - Strikes against Philippine Islands of Davao, Cebu, Minando, and Negros in preparation for, General MacArthur's invasion of Morotai.

On that morning, Air Group 2 was bombing an island off Cebu; recently arrived Ensign Thomas Cato Tillar took off from Hornet before dawn in his Hellcat. He became embroiled in a dogfight with three Japanese fighters, downed one of them and was shot down himself. Only his aircraft was damaged; Ens. Tillar ditched safely and clambered aboard his life raft. He had been slightly injured in the crash, but the sea was calm and he hoped for a prompt rescue. He found himself about 600 yards from the small island of Apid, which was about 10 miles from Leyte. Before long, some Filipinos in outriggers came to get him, communicating their friendliness by their gestures and their actions. They brought him to shore, where about 200 people were waiting.

A young man, who looked about 18, introduced himself as "Sosa" and offered to interpret. The others had brought Tillar's gear ashore, stowing it in a shed labelled "APID WATER TANK". Sosa explained that the Americans had built the tank and that Apid was the name of the island. Tillar got on well with the locals, passing out razor blades, candy, etc. to the islanders, who had no use for the Japanese.

Sosa surprised the downed Ensign by showing him his Philippine Army papers, indicating him to be a PFC, age 26. He had been captured by the Japanese, imprisoned on Luzon. After escaping about eighteen months previously, he had been hiding out on Apid. The local chief and his wife plied Tillar with raw eggs, which he felt he couldn't refuse. At about 3PM, much to Tillar's relief, they heard aircraft engines overhead. Tillar signaled with his mirror, but the planes flew on. Increasingly aware of his injured shoulder and his exhaustion, Tiller started to become frightened.

Heading back to the village, they heard more planes again - F6Fs flying low and slow. Tillar signaled frantically with mirror, tracer bullets and a Very gun. As the planes circled, an outrigger came ashore carrying a Lieutenant in the Filipino guerillas. The officer wore civilian clothes, clean trousers and a pink sport shirt. He told Tillar that he welcomed the presence of American carriers in the area and asked to be supplied with weapons and medical supplies.

Distracted by the approach of a Curtiss SO2C rescue seaplane, Tillar asked the officer about the number of Japanese soldiers on the large islands in the area. Only 15,000 on Cebu and none on Leyte. Thinking that this information might be of some modest use to U.S. intelligence officers, Tillar tried to remember the details, but the seaplane touched down on the water and taxied in. Tillar rafted out to be picked up by Mike Spinelli, pilot of the SO2C.

As darkness closed in, they returned in the seaplane to the cruiser Wichita, where a groggy Tillar was interviewed by Admiral Turner Joy. At first, he was almost incoherent, but when stimulated by a tumbler of whiskey that the Admiral ordered for him, he related all his experiences. Admiral Joy became very interested in the information about the slight Japanese troop strength in the central Philippines. Soon his exhaustion and the whiskey did Tillar in, and he staggered to a bunk and slept for 12 hours.

Meanwhile Admiral Joy sent the information to Admiral Halsey. By the next day, September 13, Halsey recommended that the proposed invasions of Yap and Mindanao be cancelled, in favor of a direct strike on Leyte - that much closer to Manila, and to Tokyo. With General MacArthur's concurrence, Halsey's bold new plan went up the chain to General Marshall, President Roosevelt, and other top Allied planners, then in conference at Quebec. They agreed as well, and 5 weeks later, the Americans waded ashore on Leyte - two months earlier than in the original plans.

Ensign Tillar didn't do it all by himself, but his report surely made the decision to go accelerate the Leyte invasion much easier.

My thanks to Elizabeth Tillar, Cato's daughter, for bringing this story to my attention, for supplying me with the source articles, and for gently prodding me to get it done. It is somewhat condensed from an article that appeared in The American Legion Magazine in March 1960, as told to Albert Rosenfeld. Another version of the story, by Carl Solberg, appeared in Naval Aviation Museum Foundation magazine, Vol 7. No. 1, Spring 1986.

30 September 1944 - For month of September, Hornet air wing had shot down or destroyed 55 aircraft, sunk 27 ships, probably sunk 22 more and damaged more than 128. VF-2 had become top fighter squadron in the Pacific with more total victories and more ace pilots than any other fighter squadron. Of 50 pilots on board, 27 (28?) were confirmed aces.