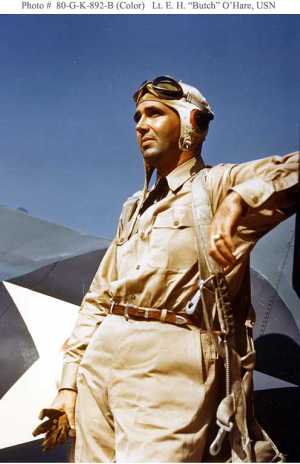 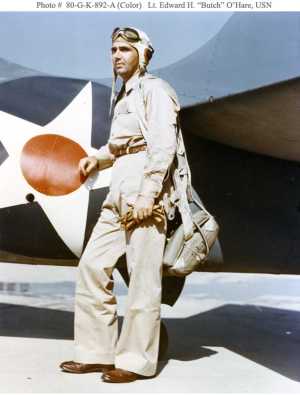 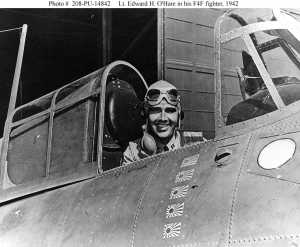 O'Hare in cockpit of Wildcat 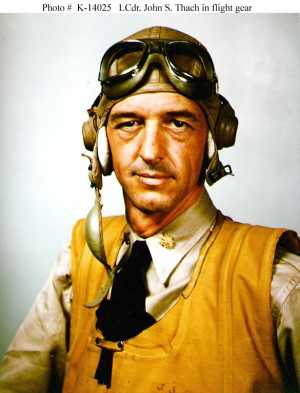 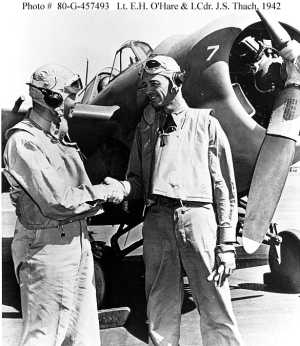 Edward H. O'Hare was born on March 13, 1914 in St. Louis, the son of "E.J." O'Hare, a wealthy businessman and attorney. His parents sent him to Western Military Academy (WMA) at age 13; after his arrival he pursued an interest in marksmanship, becoming president of the rifle club. In 1932, he graduated from WMA, and in 1933 went on to the US Naval Academy. Many of his classmates from both schools died in WWII.

Upon his graduation from Annapolis he received choice duty on the USS New Mexico (BB-40). While he was interested in aviation, all new U.S. Navy officers had to spend two years in surface ships, before specializing in aviation or submarines. Thus in 1939 he started flight training at Naval Air Station (NAS) Pensacola, learning the basics on N3N-1 and Stearman NS-1 biplane trainers.

In November, his father was gunned down by Al Capone's gunmen, most likely because he had given the government information useful in its prosecution of Capone. The gangland-style murder made big headlines, and the newspapers printed numerous speculations on the circumstances of the murder. Many of these were less than flattering and implied that E.J. was involved with the mob. (Ewing & Lundstrom's excellent biography, Fateful Rendezvous: The Life of Butch O'Hare, covers these events in great detail.) Arriving at Pensacola after the funeral, young O'Hare moved up to flying more advanced biplanes like the Vought O3U, the Corsair SU, and the Vought SBU-1 scout bomber (top speed 205 mph). In early 1940, he completed the required flying in patrol planes and advanced land planes.

When he finished his naval aviation training in May, he was assigned to VF-3, the USS Saratoga's Fighting Squadron. The CO was Warren Harvey; the great John "Jimmy" Thach was XO at this time, later succeeding Harvey as CO. VF-3 was flying the Grumman F3F-1 biplane and the newer Brewster F2A-1. In July, 1940, Ed O'Hare made his first carrier landing, "just about the most exciting thing a pilot can do in peacetime." Jimmy Thach used to knock the new pilots down a notch by outflying them. He would let a rookie gain an altitude advantage, and then, while reading a newspaper or eating an apple, he would out-maneuver him and get on his tail. But when he tried this on O'Hare, he couldn't gain an advantage. Duly impressed with O'Hare's flying abilities, Thach closely mentored the promising young pilot.

In early 1941, VF-3 transferred to Enterprise, while Saratoga underwent a major refit at Bremerton. While the 'Big E' was at San Diego, Warner Brothers filmed the early Technicolor movieDive Bomber on it, featuring Errol Flynn, Ralph Bellamy, and Fred MacMurray.

July was an important time for Ed O'Hare. He met his future wife, Rita (proposing to her the first time he met her) and also made his first flight in a Wildcat. He and Rita married six weeks later, and for a honeymoon, they sailed to Hawaii in separate ships, Butch on Enterprise and Rita in a passenger liner. (I presume they stayed in the same hotel.) On December 7, the Japanese attacked Pearl Harbor and the United States was at war. Butch and VF-3 were assigned to the carrier Lexington.

On February 20, 1942, Butch O'Hare demonstrated in real life, and when it counted most, the fighting skills he had mastered. The carrier Lexington had been assigned the dangerous task of penetrating enemy-held waters north of New Ireland. From there her planes were to make a strike at Japanese shipping in the harbor at Rabaul. Unfortunately, while still 400 miles from Rabaul, the Lexington was discovered by a giant four-engine Kawanishi flying boat. Lieutenant Commander John Thach, skipper of the Lexington's Wildcat fighters, shot down the Japanese "Snooper," but not before it had radioed the carrier's position. That afternoon Commander Thach led six Wildcats into the air to intercept nine twin-engine enemy bombers. In a determined attack each of the Wildcats destroyed a bomber and damaged two more. The ship's anti-aircraft guns finished off the rest. In the meantime, nine more Japanese bombers were reported on the way. Six Wildcats, one of them piloted by Butch O'Hare, roared off the Lexington's deck to stop them. O'Hare and his wingman spotted the V formation of bombers first and dived to try to head them off. The other F4F pilots were too far away to reach most of the enemy planes before they released their bombs. As if this weren't bad enough, O'Hare's wingman discovered his guns were jammed. He was forced to turn away. Butch O'Hare stood alone between the Lexington and the bombers.

O'Hare didn't hesitate. Full throttle, he roared into the enemy formation. While tracers from the concentrated fire of the nine bombers streaked around him, he took careful aim at the starboard engine of the last plane in the V and squeezed his trigger. Slugs from the Wildcats six .50-caliber guns ripped into the Japanese bomber's wing and the engine literally jumped out of its mountings. The bomber spun crazily toward the sea as O'Hare's guns tore up another enemy plane. Then he ducked to the other side of the formation and smashed the port engine of the last Japanese plane there.

One by one he attacked the oncoming bombers until five had been downed. Commander Thach later reported that at one point he saw three of the bombers falling in flames at the same time. By now Thach and the other pilots had joined the fight. This was lucky because O'Hare was out of ammunition. The Wildcats took care of several more bombers and Lexington managed to evade the few bombs that were released. It was an amazing example of daring and shooting skill. Afterward Thach figured out that Butch O'Hare had used only sixty rounds of ammunition for each plane he destroyed. He had probably saved his ship. He was promoted to Lieutenant Commander and awarded the highest decoration of his country, the Congressional Medal of Honor.

With his Medal of Honor presentation, bond tours, and other commitments, Butch was out of combat from early 1942 until late 1943. On October 10, 1943, he flew with VF-6 in the air strikes against Wake Island. On this mission Alex Vraciu, the future ace, was Butch's section leader. Both O'Hare and Vraciu scored that day.

In November, 1943, the Americans landed in the Gilberts (Tarawa and Makin), and the carriers were covering the landings. Equipped with the new F6F Hellcats, the US fighter pilots owned the skies, and could protect the Navy's warships from Japanese aircraft. From their bases in the Marianas, the Japanese quickly developed tactics to send torpedo-armed Bettys on night missions against the US carriers. In late November they launched these low-altitude strikes almost nightly, in a deadly attempt to get at Enterprise and other American ships.

Ed O'Hare, now Enterprise Commander - Air Group (CAG), was deeply involved in developing ad hoc counter-tactics, the first carrier-based night fighter operations of the US Navy. As the primitive radars were very bulky, they were carried on the Enterprise, on the fairly large TBF Avengers, but not on the smaller and faster Hellcats. The plan required the ship's Fighter Director Officer (FDO) to spot the incoming Bettys at a distance and send the Avengers and Hellcats toward them. The radar-equipped Avengers would then lead the Hellcats into position behind the incoming Bettys, close enough for the Hellcat pilots to spot visually the Bettys blue exhaust flames. Finally, the Hellcats would close in and shoot down the torpedo-carrying bombers. All the planes on both sides would be flying at low level. The plan was experimental, complicated, risky, and necessary - if the Bettys were to be thwarted.

The night of November 26, 1943 was the first combat test of the plan, following an earlier mission that hadn't contacted the Japs. The 'Black Panthers', as the night fighters were dubbed, included two sections of three planes. Both included two Hellcats and one Avenger. Butch led his section from his F6F, Warren Skon flew on his wing; Lt. Cdr. Phillips piloted the TBF with radarman Hazen Rand and gunner Alvin Kernan crewing the plane. (Alvin Kernan's memoirs of his experiences as an enlisted man on US Navy carrier during WWII, Crossing the Line: A Bluejacket's World War II Odyssey, describe this night in detail, from the perspective of the man who fired the Avenger's gun seconds before Butch disappeared. (The book also happens to be the best-written narrative of WWII naval aviation that I've read in a long time. I recommend it highly.)

The night's events were complicated and confusing: the Hellcats had trouble finding the Avenger, the FDO had difficulty putting any of them on the targets, and it was all new to everyone. Phillips, in his lightly armed Avenger, found some of the attacking Japanese bombers and surprisingly, shot two of them down. Following that brief action, in the dark, with nothing to be seen but the flaming gasoline from the downed Bettys burning on the water (for over an hour?), the O'Hare and Skon got into position behind the Avenger. About that time, the Avenger identified a Betty behind the Hellcats. Kernan fired at it. Moments later, O'Hare failed to respond to the radio; he had gone down.

What happened? There are three possible explanations:
1) Friendly fire, i.e. Kernan mistakenly shot O'Hare down.
2) The Japanese bomber shot O'Hare down, in a quick, lucky burst that killed Butch instantly without heavily damaging the Hellcat.
3) When Kernan opened up, O'Hare took evasive action, the Hellcat's wingtip touched a wave and dipped into the ocean.

In a recent, thoroughly-researched biography of O'Hare, the respected author and naval historian John Lundstrom and his co-author Steve Ewing incline toward the second explanation (Butch was shot down by the Betty), in a "freak occurrence in a dangerous and complicated operation."  Their specific conclusion is that "Butch fell to his old familiar adversary, a Betty. Most likely he died from, or was immediately disabled by, a lucky shot from the forward observer crouched in the Rikko's [Betty's] forward glassed-in nose...the nose gunner's 7.7mm slugs very likely penetrated Butch's cockpit from above on the port side and ahead of the F6F's armor plate." Further, the Index references to TBF gunner Alvin B. Kernan explicitly state he is "wrongly accused of shooting down Butch."

Ewing and Lundstrom trace over a half-century's confusion about what happened to O'Hare from a 1962 history of  Enterprise written by U.S. Navy Commander Edwin P. Stafford. This history is based on action reports and remembrances of other crew members of Enterprise, but does not contain interviews with surviving members of O'Hare's last flight. By contrast Ewing and Lundstrom talked with three of the four persons who survived that flight, the other F6F pilot, Andy Skon, TBF radar officer Hazen Rand, and TBF gunner Alvin Kernan. Until their Fateful Rendezvous, Ewing and Lundstrom write, "Through Stafford and other accounts based largely on the action reports, Butch has wrongly become known as one of America's most famous 'friendly fire' casualties."

For their roles in protecting the carrier and in carrying out the Navy's first combat night-fighting mission, Phillips, Rand, and Kernan were awarded Navy Crosses. (Cynics ever since have concluded that the Navy, having to choose between courts-martial or medals for the Avenger crew, opted for the latter, not wanting to admit that its biggest hero had been brought down by friendly fire.)

Having read Lundstrom's book, Fateful Rendezvous: The Life of Edward O'Hare, and Kernan's memoirs, Crossing the Line: A Bluejacket's World War II Odyssey, I'm inclined to accept Lundstrom's most likely explanation, and also his general conclusion. Both books are very well-written , and I recommend them to readers interested in this topic, not merely for the events of November 27, 1943. (On a note of personal coincidence, I -- me, the author of this website -- took an English course at Yale University in 1974, taught by the well-known Shakespearean scholar, Alvin B. Kernan. - SS)