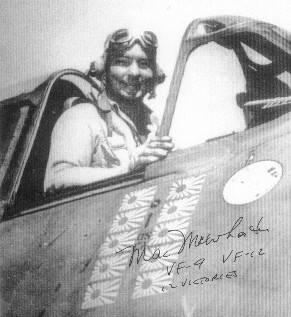 Ham McWhorter in F6F on Essex, just after his tenth kill at Truk

Lt. Hamilton "Mac" McWhorter III was the first F6F Hellcat ace of the US Navy. He attended the University of Georgia and Georgia Tech, before entering the Navy's flight program in August, 1941 and was commissioned at Pensacola in Feb., 1942. He flew the F2A Brewster Buffalo in training at Opa Locka, and sympathized with the Marines at Midway who had to go into combat with them.

The pilots of Fighting Nine carrier-qualified with the F4F Wildcat in 1942, on USS Long Island, the small carrier that had carried the first Marine fliers to Guadalcanal. The young Georgian first saw combat with VF-9, flying the Wildcat from USS Ranger in strikes against Casablanca (as in the Bogart movie), where he did a lot of strafing, but met no aerial opponents (nor Rick Blaine).

On its return from North Africa, VF-9 was slated to convert to the new F4Us in January 1943, but Vought hadn't produced enough to equip all the planned squadrons. So, Fighting Nine took delivery of the Grumman F6F-3 Hellcats that month, the first operational squadron to do so. Even Grumman's Hellcat program could only deliver a few planes a week to the squadron at NAS Oceania, near Norfolk, Virginia. The fighter was so new that there no pilot handbooks were available. Compared to the F4F, the roomy F6F was a big improvement: 60 mph faster, a better rate of climb, and more ammo capacity.

VF-9 was assigned to and qualified in F6F's aboard Essex in February, 1943, and deployed from Norfolk to the Pacific on Essex in May. Most pilots flew more than 50 hours in the new F6Fs. Many accumulated another 30 before entering combat, but 80 hours was unusually low compared to later wartime standards when many pilots had 300 hours in the Grummans before flying in combat.

That summer in Pearl Harbor, VF-9 got a new skipper, Lt. Cdr. Philip H. Torrey, and went aboard USS Essex, the first of the new class of fleet carriers that would win the naval war in the Pacific. They embarked on a "training raid" against Marcus Island in late August, the first use of the Hellcat in combat. The Marcus raid was fairly uneventful and no Japanese planes sortied to fight them.

In mid-September, 1943, the Navy put together, for the first time, a task force of six carriers, including Essex and its VF-9. When four of these carriers struck Wake Island on October 5-6, the Hellcats saw their first significant aerial combat. Half an hour before dawn on the 5th, each of the four carriers launched three fighter divisions, 47 Hellcats in all. When they were still 50 miles out from Wake, the Japanese radar detected them, and 27 Zeros intercepted. In the ensuing dogfight, Fighting Nine's skipper, Phil Torrey, shot down one Zero, then evaded two more by dodging in and out of clouds. Lt. Hadden, while watching a shared kill fall into the ocean, was jumped by two Zeros, and was lucky enough to make it back to Essex with most of his engine oil emptied out through several 20mm holes. Lt. (jg) McWhorter dove into a gaggle of Zeros, when one serendipitously appeared in his gunsight. He fired a short burst and exploded the Zero - his first aerial victory.

He destroyed two more Zeros in the Nov. 11 raid on Rabaul. (See Tom Blackburn's experiences on that day.) Task Force 50.3 (Essex, Bunker Hill, and Independence) arrived in the Southwest Pacific on Nov. 5, 1943. They began to hear of casualties from the day's raid, so the fliers were a little apprehensive when they learned of the follow-up planned for the 11th. The incomplete intelligence reports that were available did little to ease their trepidation at attacking "Fortress Rabaul."

Just after dawn on Nov. 11, 1943, Essex, about 165 southeast of Rabaul, launched her strike planes, including McWhorter's VF-9 on escort. En route to the target, flying at 10,000 feet, a dozen Zeros picked them up and tried to lure the fighters away from their charges. While Blackburn recalled lots of "junk transmissions" coming from the F6F squadrons, McWhorter noted the "excellent radio discipline of our group." (Funny how, whoever tells the story, it always seem to be "those other guys" who cluttered up the airwaves. - SS) The Essex strike force reached Rabaul without difficulty. As they dove into the attack, no Zeros appeared, but the AA was pretty heavy.

The Jap warships were leaving the harbor at high speed and McWhorter went after a cruiser, going into his strafing run off the cruiser's starboard beam. It seemed like every weapon on the ship was firing at him and he could actually see the eight inch shells coming at him. When he was 2,500 feet out, he fired a four second burst at the open AA gun batteries, then zoomed over the ship.

Heading back to the rendezvous point, he saw huge World War One style dogfight going on, involving about a dozen Hellcats and over 30 Zeros. He dove into the melee and shot up a Zero that was scoring heavily on another Hellcat. He saw the Zero flame, but couldn't tell if the Hellcat escaped. Suddenly he heard a sound "like when someone throws a handful of large rocks on a galvanized tin roof." He snapped his plane over into a split-S dive and instantly found another Zero in his sights, which he quickly exploded with a short burst. This combat only lasted about 45 seconds, long enough for McWhorter to claim two kills.

Only lightly damaged, McWhorter met up with the F6Fs and escorted the strike planes back to Essex. Later that afternoon he flew an uneventful CAP over the carriers. In the evening, the torpedo-bomber and dive-bomber pilots, who usually had little use for "hot shot" fighter pilots, came into the ready room, laden with gifts for their protectors: cigarettes, gum, candy, etc.

While the number of American victory claims on the Rabaul raids were overstated, they unmistakably reduced the Japanese air strength - both pilots and planes. The raids also showed that the powerful new carrier task forces could operate within the range of land-based bombers. The next step was Tarawa in the Gilberts, where VF-9 was assigned to tactical air support for the Marines. He made ace by downing a Pete floatplane off Tarawa on November 18 and a Betty bomber the next day. He only used 86 rounds to down the Betty, earning the nickname "One Slug."

The Americans secured Tarawa and Makin, and aerial combat in the Gilberts tapered off by the end of November. In December, Essex participated in the Marshalls strikes that began on the 4th.

The next big action for VF-9 occurred on Jan. 29, 1944 when the new Fast Carrier Task Force (12 carriers!) supported the amphibious invasion of Kwajalein in the Marshalls. Assigned to strafe the enemy airfield on Kwajalein's Roi islet, VF-9 launched 18 planes led by Lt. Cdr. Herb Houck. While Fighting Nine's orders instructed them to avoid combat if possible, many of them were forced to engage. McWhorter shot down two Hamps in this engagement.

Cdr. Phil Torrey 'fleeted up' to CAG-9, and Herb Houck replaced him as C.O. of VF-9 in time for the first great Truk raid of Feb. 19. McWhorter was escorting an SBD strike when he spotted the bogeys in the distance. McWhorter led his wingman in for a closer look; the bogeys turned out to be Zeros that unaccountably hadn't fired on the Hellcats. McWhorter and his wingman got behind the enemy airplanes, and with his typical economical bursts, the 22 year-old Georgian downed two of them. Another Zero came up, which he also dispatched promptly. He was the first carrier pilot to become a double ace.

When VF-9's combat tour finished in March, 1944, McWhorter helped to re-organize VF-12 (formerly flying Corsairs) as a Hellcat squadron, on the carrier Randolph. He took part in the first carrier raid against Tokyo on Feb. 16, 1945, downing a Zero.

His 12th and last victory came on May 13, when he downed a Myrt recon plane. He was flying morning CAP over Task Force 58, when he was vectored to to intercept a high bogey. The IJN C6N Myrt was at 25,000 feet and going away. McWhorter got so close that when he flamed it, its oil got all over his Hellcat. As the Myrt exploded, two parachutes popped out, each holding a modest size box. One young ensign had to investigate and the box, apparently quite solid, smashed the leading edge of his wing. Later that same day, McWhorter led an escort mission for two Vought OS2U Kingfisher that had to rescue a couple pilots downed in Japan's Inland Sea. With some difficulty, and lots of S-turns, the high-powered F6Fs kept pace with the slow Kingfishers. As they approached the area where the downed pilot had been reported, the planes that had been circling above had to depart because of low fuel. In the sea below, a bright yellow dye marker guided the Kingfishers to the downed pilots. As he made the pick-up, one of the OS2U pilots cut his engine. From high above, McWhorter saw the prop stop, and he thought that this was not a good idea, being only 15 miles from a Jap air base. But the rescue plane re-started in a couple minutes and took off safely. On the return flight the Kingfishers, now more heavily loaded with humanity, flew even more slowly. By early afternoon, all hands were back on board Randolph.

By the time they landed, McWhorter had been aloft for over five and a half hours, his longest flight of the war. While five hour flights were routine, what really hurt was the survival gear that some "sadist" had decided should be packed right under the pilot's butt, with the emergency water can cutting into them. There was no room in the cockpit to avoid this literal 'pain in the butt'.

VF-12 left the combat zone for Hawaii in June, 1945. McWhorter stayed in the Navy, from which he retired in 1969. He was elected to the Georgia Aviation Hall of Fame in 1989. (I was honored to receive an e-mail from Cdr. McWhorter in December 2000. He noted some changes to this article, and was kind enough to send me the photo at the top. He just completed a book about his WW2 experiences, The First Hellcat Ace, published by Eric Hammel's Pacifica Press in March 2001. - SS)