Deck of USS Yorktown, after being hit during Battle of Midway, June 1942 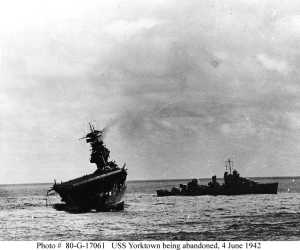 "We just shot his ass off!" McCuskey whooped when he and his wingman downed a Japanese flying boat in early 1942. After the disaster at Pearl Harbor, they felt great about striking back at the Japs, however easy the victory. Later victories would prove to be much more difficult.

Born in February 8, 1915 in Little Rock, Arkansas, he was the top-scoring fighter pilot during the Battle of Midway, and one of the U.S. Navy's early aces.

He enlisted in 1938 and won his wings and ensign's commission in the Reserves in October 1939. He began the war with VF-42, originally a Ranger squadron, which was temporarily assigned to Yorktown (CV-5) in late 1941 for Atlantic Ocean neutrality patrols. Fighting 42 was equipped with some of the first F4F-3 Wildcats to roll off Grumman's production lines. After Pearl Harbor, the new Wildcats and Yorktown were urgently needed in the Pacific, so VF-42's assignment to Yorktown became more or less permanent.

Just two weeks after Pearl Harbor, Yorktown cast off from Norfolk, headed through the Panama Canal, and tied up at San Diego. She then escorted a convoy carrying Marine reinforcements to American Samoa and joined USS Enterprise (CV-6). The two carriers planned to strike simultaneously two widely separated targets: the 'Big E' would hit the Marshall Islands, Yorktown bases in the Gilberts. The raids were basically failures, Yorktown caused little damage to the enemy, but lost seven planes and sixteen men in accidents.

But while returning eastward on February 1, VF-42 got on the scoreboard. Radar picked up a bogey and the ship went to battle stations. McCuskey and Ensign John Adams went after the intruder, a Kawanishi H6K flying boat, code-named Mavis, flying near Yorktown. The crew watched as the two Wildcat pilots chased the big plane into a cloud, and listened on the ship's PA to the radio chatter. The two ensigns were yelling like cowboys. The Jap plane never came out, just pieces falling out of the sky. An excited McCuskey cried out "We just shot his ass off!" The two pilots shared that credit.

After convoy duty in March and April, Yorktown made for the Coral Sea to help prevent "further advance by the enemy in the New Guinea-Solomons area." On May 4 she launched torpedo and bombing strikes at Japanese ships off Tulagi. McCuskey, John Adams, Bill Leonard, and Ed Bassett flew cover for the TBD's mid-day mission. "You know," McCuskey recalled later, "I wasn't even supposed to go. I was just moving the aircraft on the flight deck for a pilot who hadn't finished lunch. Then all of a sudden, away we went."

McCuskey and Adams found a Japanese gunboat and chased it up on a beach. Later they strafed the Jap destroyer Yuzuki, joined by the other two Wildcats, killing the captain and dozens of its crew. McCuskey and Adams flew around, looking for more targets; they ran low on gas and had to ditch for lack of fuel near Guadalcanal. As they got ashore, they were surrounded by natives wearing only g-strings and armed with stone axes and knives made out of human thighbones. At first it looked like a rough spot for the pilots, but the natives were friendly. They helped the two pilots make a tent to attract the destroyer Hammann looking for them. They demolished their two Wildcats which were in the shallow water and left the wrecks to the natives. Hammann returned them safely to Yorktown.

While escorting TBDs over the Japanese fleet on May 8 during the Battle of the Coral Sea, McCuskey gained his first full victory, a Zero from the carrier Shokaku  Low on fuel he landed on the damaged Lexington, where his aircraft remained as the carrier burned, exploded, and sank. After the battle, McCuskey returned to his squadron and Yorktown.

Badly damaged at the Coral Sea, Yorktown returned to Pearl Harbor for 72 hours of intensive, if jury-rigged repairs - enough to make her seaworthy for the upcoming confrontation at Midway. Some changes were made to her torpedo and fighting squadrons. The personnel of Fighting 42 were merged into Fighting 3 (VF-3) under the command of the great Jimmy Thach. They were equipped with twenty-seven of the latest F4F-4 folding-wing Wildcats.

VF-3 had trouble from the start, beginning with the death of its exec in a flying accident. Once they got to sea, they found out that the new Wildcat's guns had not been mounted, but were stowed in the wing wells, packed in cosmolene. The ordnance men had to clean, mount, and boresight the guns. At sea, they could not boresight the guns in the normal way, with a target set up 1,000 from the plane. They improvised some templates, worked around the clock, and prepared the guns before June 4.

The initial plans for that day included McCuskey with the escort for the torpedo planes; an assignment that he did not relish at all. Since the TBDs flew at 1,000 feet, there was nowhere for the Wildcats to dive away to. Luckily for McCuskey, Jimmy Thach assigned him to CAP, instead of torpedo escort. As has been re-told countless times, the torpedo squadrons were virtually wiped out, but their sacrifice allowed the SBDs to sink three carriers. Yamamoto's fleet had been dealt a crushing blow. (See publicity photo of McCuskey and Ensign George Gay - of Torpedo Eight fame)

Late that afternoon American fliers found a fourth enemy carrier and badly damaged it too, but our own fleet now came under attack. Lieutenant Elbert McCuskey took off from Yorktown with three other Wildcat pilots of VF-3 and faced the attacking Japanese dive bombers who were flying in a V of V's. McCuskey went straight through the first V and shot down the outside plane, then turned slightly and nailed the two rear planes in the second V. From then on it turned into a dogfight with the Vals, two of which got on McCuskey's tail. He dove away and when climbing for altitude realized he was out of ammunition. He radioed Yorktown that he was coming in for replenishment, but was told to hold off. He considered chopping off a Val's tail with his propeller (as Jimmy Thach had advised) but thought better of it.

But enough Jap planes got through to hit Yorktown, badly enough so that she could not be saved. The gallant ship was abandoned later that afternoon. Lieutenant McCuskey had been stationed on Lexington when she went down in the Coral Sea; now his second ship, Yorktown, was doomed too. His one consolation was that he had blasted five of the enemy in one day. And of course, Midway was a great victory for the U.S. Navy, the turning point of the war in the Pacific. (Remember Charlton Heston in Hollywood's version? Snarling at his son, "And you better watch out that some hotshot Jap pilot doesn't flame your tail!" Which of course, is exactly what happens, and Heston dies trying to save his son's plane.)

With a total of 6.5 in the first six months of the war, he was the top Navy ace at the time.

After Midway, McCuskey served as a flight instructor and tested a new gee suit for the Navy. Promoted to Lt. Cdr., he specialized in low-level recon flights. He also went on to score seven more times while flying F6F Hellcats with the new VF-8 on Bunker Hill, for a total of 13.5 victories.   He retired as a Captain in 1965 and died in 1997.