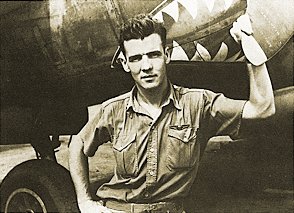 Two P-38 Lightnings roared low over Aitape Harbor, their props throwing up spray. Down below, six Japanese barges appeared to be tempting targets. The American pilots, Tom Lynch and Dick Bong, both top aces, hadn't found any aerial opposition on this day, March 8, 1944. The barges would do.

The massive firepower of the twin- engined Lockheeds' 20mm cannon and 50 caliber machine guns, tore into the craft, setting at least one of them afire. As the two pilots came around for a second pass, gunfire opened up from below, and caught Lynch's P-38 in the right engine. Lynch nursed his aircraft along, and it burst into flames. Bong radioed him to get out. Lynch desperately fought for altitude, and as the plane struggled, he finally bailed out. Too close to the ground. His chute barely rippled, and Bong saw his mentor plunge into the deep jungle. For the second time in four days, a skillful and inspirational USAAF leader had been killed over New Guinea.

Thomas J. Lynch, born in Catasauqua, Pennsylvania, was a precise pilot, a technician. One measure of his skill was the fact that he shot down three Japanese planes while flying the decidedly inferior P-39 Airacobra.

Lynch had joined the Army Air Corps in 1940 and flew the new Bell P-39 with the coincidentally numbered 39th Pursuit Squadron before Pearl Harbor. (A unique and innovative design, the Airacobra featured a nose-mounted 37mm cannon and a tricycle landing gear, but post-prototype add-ons slowed it down and the lack of a turbocharger prevented it from operating effectively above 10,000 feet.)

Based at Selfridge Field, Mich., the 39th Squadron was one of three squadrons of the 35th Group (along with the 40th and 41st). The 39th was a distinguished unit, having been originally comprised of pilots from Eddie Rickenbacker's old 94th Pursuit Squadron. After transitioning to the P-39 Airacobra, the 39th adopted the nickname 'Cobras', which has stuck with them thoughout the last 60 years. They shipped out for Australia in the dark days of early 1942, and shortly moved up to Port Moresby, New Guinea.

Lynch achieved 3 victories in a P-39: 2 over New Guinea on May 20, and another on May 26. The squadron's combat diary include these comments on the P-39 from the pilots:

But they gave as good as they got in these two months: losing 10 Airacobras (but no pilots), while claiming 10 Zeros.

Fortunately, the 39th only had to struggle with the P-39 for a couple months. In June, 1942, they were selected to be the first squadron in the Fifth Air Force to receive the Lockheed P-38 Lightning, a powerful, long-range, high-altitude, twin-engined fighter. Despite mechanical problems and crews unfamiliar with the Lightnings, by the Fall, the squadron was operating the new ships from Laloki air base, about 15 miles from Port Moresby.

General Kenney, head of the Fifth Air Force, offered an Air Medal for the first P-38 pilot in the theater to shoot down a Japanese plane. Late in November, the 39th undertook a fighter- bomber a raid over the Japanese waterfront airstrip at Lae. Captain Robert L. Faurot dropped a bomb in the water in front of a Zero taking off. The tremendous geyser knocked it down, and Faurot claimed Kenney's promised Air Medal.

Lynch moved up to command the 39th Squadron when Major George W. Prentice was selected to run the new 475th Fighter Group.

In December, Lt. Richard Bong was assigned to fly with the 39th Squadron in their P-38's. They frequently flew top cover over the American beachhead in the Buna - Dobodura area, on New Guinea's north coast. To reach this area, they had to fly over the cloud-covered 13,000 foot Owen Stanley Range. On Dec. 26, the Japanese air forces attacked the Buna beachhead, and the pilots of the 9th FS knocked down 8 of them.

The next day, late in the morning of the 27th, coastwatchers alerted the US forces to another Japanese air raid (12 Vals, 12 Zekes, and 31 Oscars) on Buna. The squadron scrambled three 4-plane flights. Lynch led one flight - with Bong on his wing, Lt. Sparks, and Lt. Mangas. 1st Lt. Hoyt Eason led another. They formed up at 1500 feet over Laloki, climbed over the mountains, and took up positions at their 18,000 foot patrol altitude. Down below ships unloaded supplies for the troops. When the Jap planes appeared, Lynch led the way into the melee, and the Lightning pilots claimed seven victories, including two Ki-43's for Lynch and a Zero & a Val for Bong. Lynch was an ace.

In 1943, Lynch ran up his score and was promoted to Major, and Commanding Officer of the whole 35th Fighter Group. On one occasion, he had to bail out of his P-38 over the water, and broke his arm in the process. On September 4, over the Huon Gulf, he became one of the first in the theater to down a Ki-48 Lily bomber.

Capt. Curran L. 'Jack' Jones, a 5-kill ace, flew with Lynch in the 39th squadron. In Eric Bergerud's Fire in the Sky: The Air War in the South Pacific, Jones describes how Lynch balanced aggressivess and calculation.

"All good fighter pilots were aggressive. Some were exceptionally so. My dear friend Bob Faurot was like that. ... Tommy Lynch was our leading ace. He was cold-blooded. I think he was the best fighter pilot in the Pacific. In combat he was calculating. ... I preferred flying Tommy's wing compared to Bob's because when Faurot saw the enemy he'd say "Tally Ho! There they are, let's get 'em." He'd climb up straight underneath them and try to attack. Now that's risky against a Zero. You want to maneuver and find a good position to begin your attack before closing. Skill and cunning had to be combined with aggressiveness.

Tommy Lynch never forgot he was responsible for the three guys along with himself."

Lynch's fine leadership contributed greatly to the success of the 39th Fighter Squadron, which counted twelve aces among its pilots, as shown in the table.

Battle of the Bismarck Sea

On the 1st of March, Allied intelligence picked up more vital information. The Japanese planned to reinforce their garrison at Lae with 7,000 soldiers. Their force consisted of eight Maru (7 troop ships and 1 cargo ship laden with aviation fuel) and eight destroyers, with 30 Zeros on CAP. General Kenney ordered an all-out attack, 200 bombers and 130 fighters, which was very successful. Covered by P-38's, P-39's, and P-40's, the American bombers ripped into the thin-skinned Japanese vessels, sinking all eight Maru and four destroyers. (Read a more detailed account of the Battle of the Bismarck Sea here.) The aerial destruction of 15-20 Zeroes was icing on the cake. Lynch shot one down. The aggressive Bob Faurot and Hoyt Eason, flying in Faurot's division, were killed that day.

By October, 1943, Lynch had claimed 16 aerial victories and had been awarded a third Oak Leaf Cluster to his DFC. He went home to Pennsylvania that month and married his long time sweetheart, Rosemary Fullen. A celebrated war hero, he was quoted in one newspaper:
"All you gotta do is see them first. If you see them first you can get in position. If you see them coming up on your tail, it's too bad - you've seen them last."

In January, 1944, both Lynch and Bong returned to the Southwest Pacific. Both aces were assigned to V Fighter Command, and essentially could free-lance, go looking for Japanese airplanes wherever they could find them. Some called the pair, "The Flying Circus." Their distinctive, factory-fresh, unpainted Lightnings were a welcome sight throughout the theater.

One of the first days that Lynch and Bong teamed up successfully in combat was Feb. 10. At 1400, they took off from their base at Nadzab, on a fighter sweep over the Wewak area. Flying at 15,000 feet, they spotted several fighters and a lone twin-engine aircraft. They 'skinned their tanks', and dove, Lynch leading and Bong covering. With one burst, Lynch flamed the Japanese plane.

Five days later, they reversed roles on an escort mission against Kavieng, New Ireland. No enemy fighters opposed the bombers; after they had completed their drops and headed home, Bong and Lynch stumbled onto a Ki-61 Tony, all by itself. This time, Lynch stayed on Bong's wing, and witnessed his teammate flame the enemy fighter.

Lynch also supported Bong on a crucial ground kill. On Feb 28, U.S. Intelligence got word that senior Japanese officers would shortly be leaving Rabaul for Wewak. Gambling on a quick hit, the P-38 aces hopped in their planes and took off. They firewalled their throttles all the way to Wewak's airstrip, and arrived just as a Betty-type transport taxied to a stop. The soldiers waiting outside the plane scattered, but Bong homed in on the still-full aircraft and flamed it. None of its passengers escaped. Afterwards, 26-year old Lynch found out that he had just been promoted to Lieutenant Colonel.

On March 5, came the unsettling news that Neel Kearby, CO and top ace of the 348th Fighter Group, had gone down. Three days later Tom Lynch and Dick Bong flew their last mission together, over Aitape Harbor.

Many were stunned and deeply moved by Lynch's death: especially Bong, other pilots of the Fifth Air Force, and people in Lynch's hometown. In mid-1944, after breaking Eddie Rickenbacker's record of 26 aerial victories, Bong made a 15-state publicity tour, and stopped in Catasauqua to visit Lynch's grieving family. Later, when Bong scored his 40th victory, he went home for good. On August 6, 1945, the day the A-bomb dropped on Hiroshima, Bong stepped into an airplane for the last time. His P-80 malfunctioned just after take-off, and while he bailed out, he never had a chance. Like Tom Lynch, he was just too close to the ground.