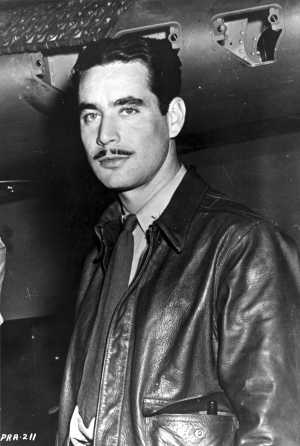 Boyd D. "Buzz" Wagner was born on 31 October 1916 in Emeigh, Pennsylvania, and graduated from Nanty Glo High School in 1934.

After studying for three years at the University of Pittsburgh, he enlisted in the Army Air Corps in 1938. In June of that year, he joined the 27th Pursuit Squadron, then based at Selfridge Field, Michigan. After transferring to the 17th Squadron, he was promoted to First Lt. in Sept. 1940, and soon took command of that squadron.

On 8 December 1941 the Japanese struck the Philippines, destroying most of the American air-power in the first attack. Flying out of Nichols Field, south of Manila, Wagner led the remnants of his squadron in repeated counterattacks.

On 12 December Wagner took of on a solo reconnaissance mission over the Japanese landing site at Aparri. A couple destroyers fired at him without effect. But the five Zeros that pounced on him presented a deadlier challenge. Aware of the P-40's superior speed and diving capabilities, he zoomed away from his pursuers and then returned to shoot down two of them. As he strafed the airfield, more Zeros came after him. When they pursued, he pulled "the oldest trick in the book," throttling back suddenly, causing them to overtake him. He then destroyed two of these before returning to his base at Clark Field.

Five days later, Wagner, Lt. Allison Strauss, and Lt. Russell Church, attacked 25 enemy planes on a new strip near Vigan. Flying at low altitude, they approached the airstrip armed with fragmentation bombs. Wagner directed Strauss to cover, while he and Church hit the field. Wagner went in first, bombing the parked aircraft. Church's P-40 was hit by enemy fire and burst into flame, but he continued his attack until his aircraft dove into the ground and exploded. He was posthumously awarded the Distinguished Service Cross.

Wagner strafed the enemy field repeatedly, destroying nine and damaging seven. As he made his last pass, one Zero got off the ground, somewhat obscured by Wagner's wing. He rolled his P-40 inverted to spot the Zero, rolled back, chopped his throttle to drop behind the Zero, and shot it down. He thus became the first USAAF ace of WWII and earned a DSC.

On the 22nd, again attacking the Japanese beachhead at Vigan, he was badly injured by glass splinters in his face. He managed to return to base and was evacuated to Australia in early January 1942.

Wagner helped reform the 17th Squadron, but soon after, as a lieutenant colonel, he was reassigned to 5th Fighter Command Headquarters. He went to Port Moresby, New Guinea in April with two P-39 squadrons of the 8th Fighter Group, and there was credited with three Zeros destroyed on 30 April. It is measure of his skill that he was one of the few American pilots to shoot down Jap planes while flying a P-39 Airacobra.

By late summer Wagner was back in the States. On 29 November 1942 he was killed in a P-40 accident 25 miles north of Eglin Field, Florida.

For many years Wagner's picture was displayed in Nanty Glo High School, in his hometown of Emeigh, Pennsylvania. I wonder if it is still there. Also, Wagner High School at Clark Air Base in the Philippines was named in his honor.