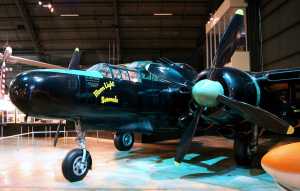 The P-61 was the first U.S. aircraft designed from the start to be a night fighter. By the time it arrived with combat squadrons in mid-1944, targets were rather scarce. Thus, while it didn't pile up a large score of enemy planes destroyed, it was an extremely capable and deadly aircraft.

It originated in the Battle of Britain, when the British urgently needed a night fighter. Because early radars were so heavy and because the British requirement called for a night-fighter that could stay airborne for a long time, only a twin-engined aircraft would work. Northrop began working on the project in late 1940. Northrop's proposal, submitted in November, followed the general outline of Lockheed's P-38: a big, twin-engined fighter, with crew and guns in the fuselage, and two engine nacelles extending back into twin booms connected by a long horizontal stabilizer.

The armament was quite different though; the P-61 housed two dorsal turrets, each with four .50 caliber machine guns.

While there had been primitive efforts to develop night fighters since 1921, by 1940, radar promised to make them practical. The British had first developed Airborne Interception (AI) radar and also developed the cavity magnetron, which permitted short wavelength radars. Using a British cavity magnetron, by early 1941, engineers from MIT and several American electronics companies had built the first microwave radar, the forerunner of the SCR-270 used in the P-61.

Meanwhile, Northrop struggled with the P-61 aircraft, by far the biggest contract it had ever tackled. Meeting the Army's requirement for a three-man crew was one of many challenges faced by the design team. Throughout 1941, indeed throughout the entire war, required engineering changes continually cropped up, delaying the development of the P-61. Guns were relocated; fuel tanks were added; and control surfaces were redesigned. The first XP-61 prototype flew in May, 1942, with test pilot Vance Breese at the controls.

The second prototype flew that November and had radar installed in April, 1943.

Flights with the YP-61's revealed that the dorsal machine gun turret caused severe tail buffeting. Thus it was removed entirely from many early P-61A's, and when added back, only mounted two guns.

Service deliveries started in May, 1944, when the 348th Night Fighter Squadron (NFS) of the 481st Night Fighter Group (NFG) received their Black Widows. While the P-61 was exceptionally maneuverable for such a large plane (thanks to the large and well-designed flaps), it remained troublesome. In June, deliveries increased to three a day. The first P-61 kill was recorded on June 30, 1944 (some sources say July 6), when a Black Widow of the 6th NFS downed a 'Betty" bomber over the Pacific. In Europe, the crews continued training while debates raged over the night-fighting virtues of the Black Widow, the Mosquito, and the Bristol Beaufighter.

Once the Black Widow did get into action in Europe, it found success against a variety of targets: fighter planes, bombers, V-1 buzz bombs, and ground targets like locomotives and truck convoys. Some ETO NF squadrons did not convert until spring of 1945, when the war was almost over. In the Pacific, the 418th and 421st NFS adopted the P-61 in mid-1944, and in the CBI, the 426th and 427th NFS transitioned to the P-61 later that year.

The first aircraft to be purposely designed as a radar-equipped nightfigher, Northrop's P-61 Black Widow was heavily influenced by early RAF combat experience with radar-equipped aircraft in 1940/41. Built essentially around the bulky Radiation Laboratory SCR-720 radar, which was mounted in the aircraft's nose, the P-61 proved to be the largest fighter ever produced for frontline service by the USAAF. Twin-engined and twin-boomed, the Black Widow was armed with a dorsal barbette of four 0.50-in Browning machine guns and two ventrally-mounted 20 mm cannon.

After initial structural and radar problems, the aircraft was finally issued to a frontline unit [the 481 st NFG] in March 1944, and both ETO and Pacific squadrons went into action almost simultaneously that spring - the honour of scoring the first kill [a Japanese 'Betty' bomber] went to the 6th NFS on 6 July 1944. Some 704 Black Widows were built in three distinct variants by Northrop, and the type saw action as a night intruder operating against ground targets as well as in its designated role. This volume features all the frontline users of the mighty P-61, and includes many first-hand accounts from pilots and gunners who saw action in the Pacific, Mediterranean and Western Europe.