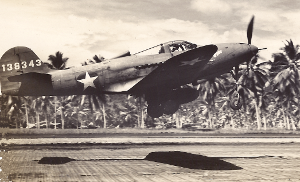 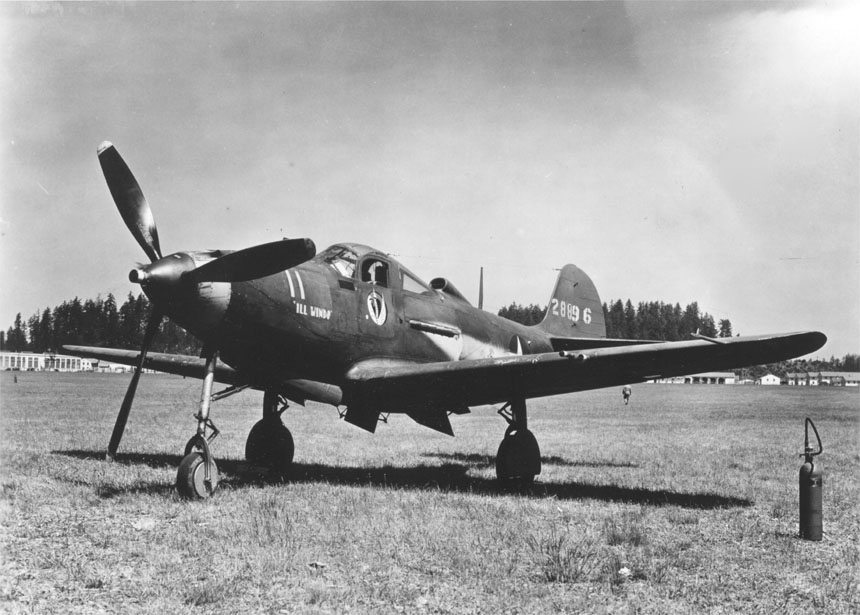 P-39s of the 35th Fighter Squadron 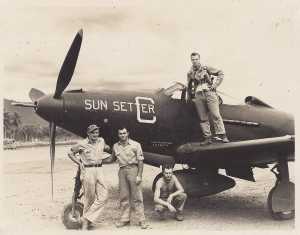 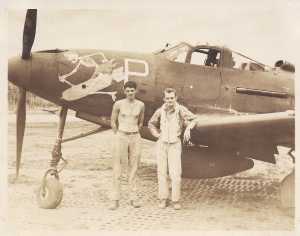 P-39 "P" of the same squadron. Nose art of skeleton riding a bomb. 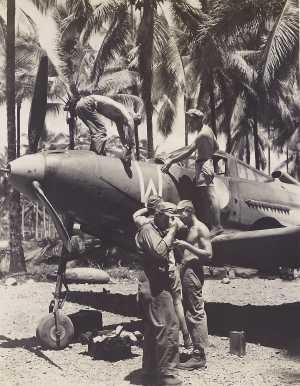 Along with the P-40, the Airacobra was one of the few U.S. fighters available in large numbers at the start of the war. While its lack of a turbosupercharger made it ineffective about 12,000 feet and while it was generally outclassed by the Zero, it served well in the early months of the war. It was relatively free of mechanical defects and breakdowns; like most American aircraft it could absorb a lot of enemy gunfire and still return its pilot back to base.

Both Robert Goebel and Bud Anderson flew the P-39 before their Groups transitioned to Mustangs. Their comments follow:

Bud Anderson on the P-39

Bud Anderson first flew the P-39 in late 1942, from Hamilton Field in Novato California while training with the 328th Fighter Group. As he relates in To Fly and Fight:

It was a good-looking airplane. If looks counted for anything, it would have been a great airplane. And the Russians absolutely loved them, and wound up with most of them. Under 15,000 feet, the P-39, called the Airacobra, was a decent if underpowered performer. But the Airacobra was mincemeat above 15,000 feet, and useless in Western Europe, where virtually all of the flying and fighting was at double that altitude. ...

But in October of 1942, I was thrilled to be flying it. It was unique, with its engine behind the cockpit, and the propeller drive shaft running between the pilot's legs. It had a tricycle landing gear, unlike anything in our arsenal except the P-38. And the cockpit was more like a car's, with a door instead of a swing-up or sliding canopy, and windows that actually rolled up and down with a crank. You could taxi the thing while resting your elbows on the sill, like cruising the boulevard on a Saturday night.

When the guns fired, the pilot could smell the gunpowder in the cockpit. Bud Anderson loved that smell.

Over half of the Airacobras produced, almost 5000 planes, went to the Soviet Union. The first P-39s to reach Soviet hands were delivered from Britain, who had rejected the aircraft after it failed RAF flight testing in late 1941. After accelerated ground and flight testing the Soviet government agreed to delivery of large numbers of Airacobras through the Lend-Lease program. Between 1942 and 1944, Soviet ferry pilots flew approximately 2,600 P-39s into the USSR from Fairbanks, Alaska. Another 2,000 were shipped (crated) to Iran, assembled, inspected, and flown to Soviet bases east of the Caucasus Mountains. The majority of the 4,600 P-39s shipped to the Soviet Union were the highly developed Q-models. Many of these, at Soviet request, lacked the two wing-mounted .50-caliber machine gun pods.

Slowly at first in the summer and fall of 1942, and then rapidly as more aircraft became available in the ensuing months, the Red Air Force transitioned both new and experienced fighter pilots to the P-39, forming or refitting fighter regiments of three squadrons, twelve aircraft per squadron. The mission of the Red Air Force was to support the Red Army, and in order to perform this mission air units at division level and above were subordinated to ground formation commanders. The Red Air Force employed the P-39 Airacobra in several roles: the most common role was to cover or protect ground forces. This entailed patrolling in a zone above a specific Red Army formation and preventing the penetration into that zone of German bombers and their accompanying fighters. A second mission for the P-39 was to escort Il-2 Shturmoviks or Pe-2 dive bombers to attack German troops and installations. In this role the P-39s were used to fend off German fighters or to suppress German AAA defenses.

A third mission for the P-39 was reconnaissance, both air and ground. A fourth mission was "free hunt", wherein pairs of experienced Soviet fighter pilots were permitted to conduct deep penetrations of German airspace over land or sea to search for air or ground targets. A fifth mission for the P-39 was ground attack, primarily of soft targets such as troop concentrations, road convoys or trains, and airfields. Contrary to popular myth, the P-39 was not employed as a "tank-buster" for two very good reasons: the M4 37mm cannon was slow-firing and only had 30 rounds of ammunition, and the Soviets never received M80 Armor Piercing Shot ammunition for this cannon through Lend-Lease. (Even had they received AP ammo, it was only capable of penetrating 1.0 inches of armor at 500 yards. After 1943 there weren't many German tanks that vulnerable, especially from the top quadrant.) Our government did deliver approximately 1.2 million M54 High Explosive shells, however, and Soviet P-39 aces put them to good use against both air and soft ground targets.

Several of the Red Air Force's ranking aces flew the P-39 for a major portion of their combat sorties. The top ace in the P-39 and number four overall was Guards Major Gregoriy Rechkalov, who shot down 50 of his total 56 kills while flying a P-39. Guards Colonel Aleksandr Pokryshkin, who finished the war as the number two Soviet ace with 59 individual and 6 shared kills, reportedly flew the P-39 for 48 of his kills. Another high scorer in the P-39 was Guards Major Dmitriy Glinka, who destroyed 20 German aircraft in 40 aerial engagements in the summer of 1943, and finished the war with an even 50 kills, 41 of them while flying the P-39. Third-ranked Soviet ace Guards Major Nikolay Gulaev transitioned to the P-39 in early August 1943 with 16 individual and 2 shared kills. He flew his last combat sortie on 14 August 1944 (ordered to attend higher military schooling), leaving the battlefield with an additional 41 individual victories and 1 shared kill after just over one year in his P-39.

Why was the P-39, which achieved so little air combat success in other theaters, so effective on the Eastern Front? The answer to this question lies in the nature of the air war itself on that front. Neither the Germans nor the Soviets engaged in high-altitude, long-range, strategic bombing. The bulk of Soviet war industry had been moved east of the Ural mountains, beyond the range of the Luftwaffe. German medium level and dive bombers went out every day, escorted by Bf-109s and FW-190s, to find and attack Soviet Army ground units. These bombers, and by necessity their escorting fighters, flew at altitudes well within the high performance envelope of the P-39-under 15,000 feet. The P-39, with its nose armament alone, had devastating air-to-air firepower. A hit on a German bomber with a single 37mm round was frequently sufficient to disable or destroy it. The Red Air Force compensated for the P-39's short range by locating their tactical airfields extremely close to the front line-often within artillery range. And during surge periods, when German air activity was intense, Soviet P-39 pilots were known to fly five and even six or more sorties in a single day.

How do we know all this? Many Soviet P-39 combat pilots wrote memoirs in the 1970s and 1980s in which they described their wartime experiences, hundreds of pages of descriptions of life in fighter units and of air combat. Other publications released since the collapse of the Soviet Union offer new information on what units were equipped with the P-39 and when, lists of pilots and their total sorties, aerial engagements, and scores. When fully exploited, these sources will reveal an enlarged and much improved picture of the P-39 Airacobra. It will be shown to be an outstanding combat aircraft, as worthy of respect as the P-38 Lightning, P-47 Thunderbolt, and P-51 Mustang.

For further reading, check out Attack of the Airacobras: Soviet Aces, American P-39s, and the Air War against Germany by Dmitriy Loza (Lawrence: University Press of Kansas, 2002). James Gebhardt, a noted expert on Soviet World War Two aviation, has studied hundreds of pages of original Soviet dvocuments and translated Attack of the Airacobras. He was kind enough to contribute the section above for this website.