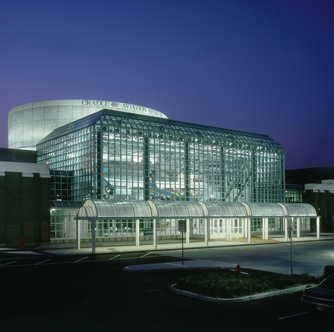 or How Long Can Two Kids Look at Old Wooden Propellers?

On a rainy Labor Day, I carefully plan my trip to the Cradle of Aviation Museum, the best aerospace museum on Long Island, considering the tastes of my two kids, ages 10 and 12, neither of them aircraft history buffs. The entrance hall atrium disappoints. A large boxy glass-enclosed hall, along the same lines as the National Air & Space Museum (NASM), it features an F-11 in Blue Angels colors, which doesn't thrill the same way as the four historic craft in the NASM's atrium. First stop, the museum's over-priced but acceptable Red Planet Cafe, decorated to look like a space station on Mars; a full stomach never hurts. We all get chicken Caesar salads; perhaps the thin Martian air made my kids woozy, causing them to refrain from the readily available junk food.

Duly fueled up, we took off for the main exhibits. The geography of the building (or buildings?) is a little hard to figure out. None of the guide maps show the whole thing in context. The main section includes the entrance atrium, the Red Planet Cafe, the obligatory IMAX theater, and the gift shop. A narrow, deliberately dark and futuristic raised walkway leads to the historic exhibit areas, i.e. the museum itself.

Laid out chronologically, this is the guts of the museum, all the old airplanes and replicas, the photographs, the little dioramas, the explanatory notes, etc. My plan contemplated spending less than an hour here in the exhibits with the kids in tow. Then, they would be mercifully sprung to go watch the IMAX movie. While they were thus engaged, I would have another undisturbed hour to go back and re-examine the wooden propellers and plastic models all I wanted.

We blew through the "Dream of Wings" section, devoted to kites, balloons, and early attempts to fly of the late nineteenth century. The next section, "The Hempstead Plains, 1904-1913" focused on that flat, open, grassy area of Nassau County that made a natural airfield in those early days. One primitive biplane, a Wright Brothers Model B, the Vin Fiz, journeyed from Brooklyn to California, in something like 49 days, with over 70 stops for rest, refueling, and repair. The journey took 82 hours of actual flight time. Another small exhibit displayed the Mineola Bike Shop (shades of Wilbur and Orville!) whose owner tested the efficiency of various propeller designs on a bicycle. Using the prop to power the bike, he "pedaled at a constant rate," and determined which propeller design moved his bicycle forward at the fastest speed.

The good stuff began in the "World War One" exhibits. A rather unimpressive Curtiss JN-4 Jenny hung overhead; not much could be seen of it. But over in a simulated workshop, another Jenny, stripped of her canvas covering, sat there with her gleaming varnished wooden skeleton exposed. You could see all the box-like sections of the frame, held taut and square with turnbuckle-tightened stays. Other cables, all clearly visible, ran from the pilot's stick back to the tail flaps and other control surfaces. Delightful and informative. Nearby, an aptly named Breese Penguin stared out. An ungainly, even a silly looking, machine with very stubby wings and a two-cylinder engine, it looked like it couldn't even get off the ground. Indeed it couldn't! The label described it as a training craft, just to give novice pilots a sense of how an aircraft moved and was controlled, but without letting them leave the ground. That must have been fun; to climb into a relatively safe little contraption like that and let the propeller pull you all over the Hempstead Plains, while you figured out what happened when you pushed or pulled the stick.

During the Great War, some Naval pilots, notably from the volunteer Yale unit, trained on Long Island. A polite letter of complaint from a Lloyd Neck resident noted that the pilots' early morning flights were disturbing his sleep decorates one wall of the exhibit. Could the flights be held later the citizen asked? Apparently, I have become completely tolerant of, and accustomed to, today's politically correct mentality, in which the military is always wrong and harmful to citizens' interest and the environment. I read, at first with surprise and then with increasing glee, the Naval Commandant's reply. (Paraphrased here) "I am shocked to receive your letter, at a time when everyone is doing their utmost to defeat the Germans. To put your own comfort first ... And furthermore, I inform you that the pilots will soon begin flying at 4AM instead of 5AM. If you need more sleep, I suggest you get to bed earlier."

Between the Wars - Lindbergh

The "Golden Age" exhibits are dominated, justifiably, by Charles Lindbergh, whose connections to Long Island were many and who took off for Paris from old Roosevelt Field, near Old Country Road and Ellison Avenue. A version of the Spirit of St. Louis hangs overhead, like Lindbergh's Jenny in the previous section, not much of it can be seen. The Museum describes it as a "sister ship," built by Ryan back in the 1920's. From the ground, it looks like large sections of the plane have be simply, somewhat crudely, rebuilt. Perhaps that's original construction. But the Lindbergh exhibit is wonderful. A short, silent movie clip plays endlessly, showing Lindy and his competitors. One case includes some fairly large models of the Spirit of St Louis and its competitors; Byrd's Fokker America, Coli and Nungesser's "l'Oiseau Blanc" biplane, a Bellanca, and the huge, ill-fated, three-engine Sikorsky. Another case houses all sorts of Linbergh memorabilia: pins, mugs, models, flags, calendars, etc., all extolling "Lucky Lindy." It was hard to explain to my children how famous Lindberg was. "More famous than Michael Jordan and George Bush combined" was the best I could do.

The "World War Two" area and later exhibits focused on Grumman's contributions. Fair enough. Not only did the great Long Island aircraft company contribute mightily to the war effort, the jet age, and the space program, but its retirees have played the main role in setting up the Cradle of Aviation Museum. And Grumman's acquired company's are given due prominence. A gleaming Republic P-47, with it eight fifties sticking out of it's wings sits in the center of the area. A model diorama of a Republic Aviation assembly plant contains dozens of small, partially assembled Thunderbolts, clearly showing how they moved along the assembly line, adding more parts, until they rolled out the big hangar doors. Full-size Grumman aircraft stand nearby: an F6F Hellcat, an F4F Wildcat, and a TBF Avenger. One quibble with the P-47 exhibit --- the sign noted that "All the great aces of the European theater flew" the Thunderbolt. I'm not sure what George Preddy, Don Blakeslee, and other Mustang aces would make of that. How about "many," or even "most?"

I didn't spend too much time in the "Jet Age." I did study the F9F Cougar long enough to learn that it was swept-wing evolution of the more well-known F9F Panther.

Grumman, the designer of the Lunar Module, played a key role in the space age, especially the Apollo program. I listened to the breathless exchanges between Houston and Apollo 11 (with a nice simulated visual of the LEM approaching the lunar surface), "Tranquility base here. The Eagle has landed." I watched again the timeless, blurry, static-punctuated film of Armstrong stepping onto the Moon's surface. "That's one small step for man, one giant leap for mankind." My kids enjoyed the highlights tape of John Young, Pete Conrad, and others skipping, dancing, singing, and driving the Lunar Rover on the Moon. Only six times in history, a pair of men (yeah - Americans) walked on the Moon. Who will return?

In the LM room, one wall is occupied by six 3 by 4 foot white posters. In the center of each poster is an Apollo mission patch and a picture of the LEM. In the lower right, each one is labeled with the completion date and delivery date of the LM used on that mission. All around the rest, filling the large empty space are signatures of the Grumman employees, all the members of the LM team. No one "hogged" too much of the space; all the signatures appear small, neat, and legible, just what you would expect of engineers signing on to their piece of history. I perused the Apollo 16 poster for several minutes, looking in vain for Tom Kelly's signature. I suppose it's in there somewhere. One fellow punctuated his name with a small rubber stamped "960," his department number I guess.

Maybe I didn't have enough time, even while my kids sat through the IMAX presentation of "Extreme," but I didn't find a large-size LEM itself. There was a LM training simulator, in the room with the signed posters described above. There were small models of the LM, but I couldn't locate the full-size "This is a Lunar Module" display. The museum's website clearly says that LM-13, which was for the cancelled Apollo 18 mission, is there; I must have missed it.

After my kids got out of the IMAX movie, an experience they found more disorienting than fun, we poked around the gift shop for a while. The gifts were, as expected, rather pricey. I had considered a nice "Cradle of Aviation" sweatshirt, but $45 was too rich for my blood. The bookstore was very well stocked, with many obscure aviation titles (that I have not seen elsewhere) on display. We returned to the Red Planet Cafe for some junk food desserts and my kids were quite happy.

I recommend the Cradle of Aviation Museum highly. Just be sure to plan your visit so that you have enough time to ponder fully wooden propellers, WWII factory dioramas, and Grumman space memorabilia. Directions, hours, current IMAX features, a full list of exhibits, etc. are on the museum's website.