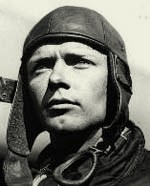 In the late Thirties, Lindbergh lost much of his popularity with the American people. Traveling in Europe, he visited Germany and was very impressed by the newly dynamic, and militaristic state. While touring German aviation facilities for the American military attache, Goering presented him with the Verdienstkreuz Deutscher Adler, the Service Cross of the German Eagle, a medal adorned with swastikas.

It would later prove to be more of an albatross than an eagle, but Lindbergh refused to return it.

Lindbergh worried over America's involvement in an upcoming European war. He decided that he could better help warn America of the threat posed by Soviet Russia if he returned to the States. He sailed in the Aquitania in April, 1939. The war in Europe started that September, and Lindbergh began to advocate neutrality in articles and speeches. By 1940 the Germans had conquered France and threatened to overrun Great Britain.

While President Roosevelt and many Americans recognized the Nazi threat to the world, other "anti-interventionists" opposed any aid to Britain, and wanted to maintain a steadfast neutrality. In retrospect, with our knowledge of the true horrors of Nazism, the Holocaust, etc. it's easy to dismiss the isolationists as misguided puppets. At the time, things were not so clear, and many patriotic Americans felt that neutrality was in our best interest. Among the prominent Americans opposed to involvement in the war were Senator Bennett Champ Clark, Colonel Robert McCormick (publisher of the Chicago Tribune), Captain Eddie Rickenbacker, Senator Burton K. Wheeler, the Socialist Norman Thomas, novelist Kathleen Norris, and of course, Charles Lindbergh.

The Committee to Defend America First (later shortened title) was formed at Yale University in late 1939 by R. Douglas Stuart Jr. Then on Sept 4, 1940, Stuart used his business connections (he was the son of the first V.P. of the Quaker Oats Co) to form a national organization in Chicago. Gen. Robert E. Wood, chairman of the board of Sears, Roebuck, became the National Chairman of America First and Stuart the National Director. In March 1941, Gen Wood expressed his desire to step down from the chairmanship and thought Lindbergh was the best man for the position. Lindbergh said that "It would be a great mistake for me to take a leading position in the America First Committee..."

On April 10, 1941, Lindbergh declined the chairmanship formally, but agreed to become a member of the national committee, a public relations group, also filled by a rotating roster of people like Lillian Gish, Alice Roosevelt Longworth, Henry Ford, Chester Bowles, Robert Hutchins, Eddie Rickenbacker, etc.. While he was NOT a founder of America First, nor a member of the AF Executive Committee, which was the actual group that determined policy, he was their most popular speaker. (The preceding paragraphs on America First were provided by Allen Koenigsberg. See the Lindy Truth Website.)

During the Lend-Lease hearings, He was called to testify before Congress in early 1941, Senator Claude Pepper wanted Lindbergh to provide some background on the development of his views on German aviation and the overall European situation. He started by asking, "Colonel Lindbergh, when did you first go to Europe?" Lindbergh deadpanned, "Nineteen twenty-seven, sir."

His public disagreements with President Roosevelt increased. Following what he felt to be a personal insult, which Roosevelt declined to apologize for, Lindbergh resigned his Army Air Corps commission in April, 1941. The split in the country deepened.

But Lindbergh went farther than others as 1941 progressed. In a famous article in Collier's magazine, and shortly afterward, in a speech at Des Moines, Iowa, Lindbergh alienated many Americans. In the Des Moines speech, he claimed that three groups were pushing America into the war in Europe: Great Britain, the Roosevelt administration, and Jews.

"Instead of agitating for war, Jews in this country should be opposing it in every way, for they will be the first to feel its consequences. Tolerance is a virtue that depends upon peace and strength. History shows that it cannot survive war and devastation. ... Large Jewish ownership and influence in our motion pictures, our press, our radio and our government constitute a great danger to our country." There was national revulsion at this perceived anti-Semitism; even some America Firsters repudiated him. Streets that had been named in his honor were re-named. During this period, many citizens wrote to FBI Director J. Edgar Hoover indicating their mistrust of Lindbergh and questioning his loyalty to the United States. This file consists of the letters sent to the Director, and various newspaper articles that were written about Mr. Lindbergh. See the FBI Lindbergh Files - released through Freedom of Information Act.

Pearl Harbor changed everything. Lindbergh and all the America Firsters realized that neutrality was no longer possible. The Axis powers had attacked us. Lindbergh immediately applied for reinstatement in the Army Air Corps. President Roosevelt (a great man, one of our greatest presidents, but also a politician) made it clear that there was no place in the Air Corps for Lindbergh. Personal appeals to Hap Arnold and Secretary of War Henry Stimson were fuitless.

Anxious to contribute in any way possible, Lindbergh sought a position in private industry. But he found that many companies did not want to alienate the administration and jeopardize contracts; many doors were closed. Henry Ford had no such worries, and brought on Lindbergh to help with the huge B-24 plant at Willow Run. While he worked hard, advising Henry Ford on manufacturing wasn't "adding a lot of value." By 1943, Lindbergh was testing high-altitude pressure chambers at the Mayo Clinic and test flying Corsairs for Chance Vought in Connecticut.

In January, 1944 he persuaded Marine Corps General Louis Wood to let him help survey the USMC Corsair operations in the Pacific. A few months later, he was flying Corsairs on combat missions with the Marine squadron VMF-223 based on Green Island.

On his first combat mission, the USMC Corsairs escorted B-25's on a bombing run over Rabaul. His F4U, powered by a 2,000 HP Pratt & Whitney radial engine, carried sixteen hundred rounds of .50-caliber ammunition, that could be spewed out at a rate of 5,000 rounds per minute with all six guns firing.

They approached the target at 10,000 feet, he saw the ship-strewn harbor. A little ack-ack came up his way, but no Zeros. He saw a few Jap planes in the revetments, but no ground activity. As the first bombs hit the edges of Rabaul, the radio chatter picked up and one pilot had already taken to his life raft. As Lindbergh's flight of F4-U's swung south, explosions erupted from a fuel dump hidden in a coconut grove. A mix of American airplanes roared over: USAAF B-25 bombers, Marine Corps Corsairs, USAAF P-39s, TBF torpedo bombers, and P-38s. The anti-aircraft batteries opened up at the strike planes.

After delivering their payloads, the bombers headed back; Lindbergh saw one TBF trailing smoke. On the ground at Rabaul, fires burned as the Corsairs lined up for their strafing runs. They flew out beyond range of the AAA, whipped into position, and set their trim tabs to dive. From 7,000 feet, he slanted down towards the enemy at Rabaul ... 4,000 feet ... 1,500 feet ... and, with a clear line of fire, he opened up. The tracers streaked onto and across a roof, and then raked an airstrip.

Lindbergh banked out to sea, his mission complete. But they still had plenty of ammunition. A target of opportunity, the Duke of York, a small island in St. Georges Channel, held a Japanese airstrip and garrison. While strafing, Lindbergh narrowly avoided shooting up a church, only to find, back at base, that the Japanese used it as a barracks.

On June 26, he approached the CO of the 475th, Col. Charles MacDonald. He identified himself and indicated that he wanted to familiarize himself with the P-38's combat operations. Engrossed in a game of checkers, MacDonald at first brushed him off. Only paying half attention to the tall stranger, MacDonald asked the world's most famous aviator, "Are you a pilot?" When Lindbergh repeated his name, MacDonald finally made the connection. He wanted to fly combat missions with the 475th. The commanders discussed it; Major Thomas McGuire, the country's second highest-scoring ace, allowed as he'd "like to see what the old guy could do." He commenced flying P-38's with the 475th.

After a few missions, the ground crew noticed that Lindbergh returned with more fuel than the other pilots. He explained to the skeptical youngsters that by setting the RPMs low and the manifold pressure high, the engine would consume less fuel. In the huge Pacific theater, extending the range of the P-38 would be a significant extension of American airpower. The 475th pilots worried that these settings would damage the engines. Lindbergh replied, "These are military engines, built to take punishment. So punish them." Soon, all the pilots adopted his approach. He flew 25 missions by early July, before he was summoned to General Douglas MacArthur's headquarters, to meet with MacArthur and General Richard Sutherland. On learning of his methods for improving the Lightning's fuel economy and range, they asked him to spread the word throughout the Fifth Air Force. Back with the 475th, on the island of Biak, Lindbergh witnessed the revolting sight of Japanese corpses - unburied and rotting; many had been atrociously looted by American soldiers.

On July 28, Lindbergh participated in the 433rd Fighter Squadron's strafing mission against Amboina, near Cebu in the Philippines. On the return, they encountered a Sonia, a two-seater armed reconnaissance plane, not exactly a world-class fighter. Somehow the Sonia pilot had eluded P-38s from the 49th Fighter Group, when MacDonald, Capt. Danforth Miller, Lt. Joseph Miller, and Lindbergh found it. The Sonia zipped right at Lindbergh's Lightning. "The Lone Eagle" fired away with his powerful armament and pulled up at the last second. The Sonia dove straight down into the water.

Three days later, again flying with MacDonald, Lindbergh encountered another Japanese plane. A Zero got behind him and only MacDonald's swift rescue and the Zero pilot's poor aim saved him.

He and Thomas McGuire, became friends - they flew together, shared a tent, and explored the islands. McGuire was even heard on one occasion, "Charles, would you get me a cup of coffee?" --- a bit of McGuire's presumptuousness, a characteristic that Lindbergh tolerated better than many of McGuire's squadron mates.

In September, Lindbergh again flew with the Marines, over Kwajalein in the Marshalls, where he successfully delivered a 4,000 pound bomb load with an F4U Corsair, the heaviest payload carried by that plane.

He returned to Europe in mid-1945, on a Naval Technical Mission, to study high-speed German aircraft. He saw first-hand the widespread devastation of German cities: Mannheim, Zell-am-See (the Luftwaffe headquarters), Berchtegaden, and Oberammergau, where he met Dr. Willy Messerschmitt. Among his stops was the Nordhausen V-2 factory near the Bergen-Belsen concentration camp. There an unbelievably aged seventeen-year old camp survivor showed Lindbergh the ovens and other horrific aspects of the camp. Lindbergh described this horror in his diaries, but equated the Holocaust to atrocities throughout history and to what he had seen in the caves at Biak. While Lindbergh was a patriot, and no anti-Semite, some flaw or weakness prevented him from ever fully owning up to his misjudgement of Hitler and the unprecedented genocide of the Holocaust.

After the war, the public generally forgot, or at least overlooked, the role that Lindbergh had played before the war. President Eisenhower restored him to the Air Force Reserves and promoted him to General. His book, The Spirit of St. Louis was awarded a Pulitzer Prize. In the Fifties, he and his family resided in Westport, Connecticut, but Charles' lifelong penchant for traveling continued, and he never really settled down.

In his later years, his concern for the negative effect of aviation and technology increased. He supported conservation causes, and wrote about his life, including his wartime diaries. He and Anne moved to the remote island of Maui, in Hawaii, where they built a comfortable retreat.