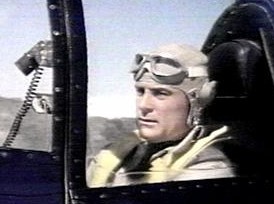 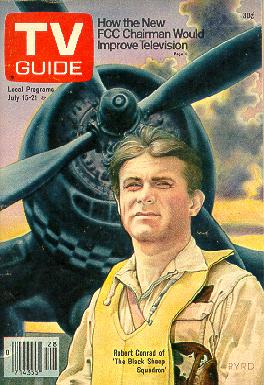 Robert Conrad as Pappy Boyington on cover of TV Guide

Loosely based on Pappy Boyington's autobiography, Baa Baa Black Sheep, which itself was loosely based on the facts, this television show was essentially fiction. The Corsairs were real, but everything else, especially all those cute nurses, bore little resemblance to Pappy Boyington's squadron of Marine fighter pilots in World War Two that fough the Japanese over the Solomon Islands.

The opening credits of the show characterized the Black Sheep pilots as "a collection of misfits and screwballs," which Frank Walton, the squadron's Air Combat Intelligence Officer, and other veterans of the squadron resented.

Walton wrote an article for TV Guide, in attempt to set the record straight." This article became the springboard for him to write his fine book Once They Were Eagles: The Men of the Black Sheep Squadron.

Pappy himself was a consultant to the show, and got on well with its star, Robert Conrad. The producers located some pretty good aircraft: about 5 Corsairs, a DC-3/C-47, some Zeros, and the ubiquitous SNJ (North American Texan) trainer. The Corsairs in the TV show were finished in overall dark glossy blue, with no identifying numbers. Perhaps it would have been easy (and inexpensive) to paint them authentically. Pappy's Corsair is well documented. But one correspondent noted that un-identified planes were easier to re-use and make appear to be more numerous than they really were.