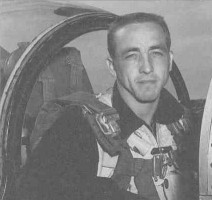 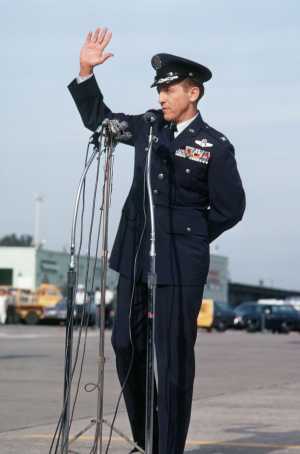 Col. Robinson Risner after his release for captivity in North Vietnam. Promoted while in prison, this was his first chance to wear his colonel's uniform.

Shot down 8 MiG-15s over Korea, POW in Vietnam

Robbie Risner was born in Arkansas on January 16, 1925, grew up in Oklahoma, and entered the Army Air Forces in 1943. He earned his wings in May, 1944, then flew P-38s and P-39s in Panama until the war ended. After five years in the Reserves (flying P-51s), he was recalled to active duty in 1951 for the Korean crisis. Captain Risner arrived in Korea in May 1952, originally assigned to a photo reconnaisance outfit, but he soon obtained a transfer to the 336th Fighter Squadron of the 4th Fighter Interceptor Wing of the U.S. Air Force, based at Kimpo.

He shot down his first MiG on August 5, 1952, and then scored again on September 9, September 15, and twice on September 21, making him the 20th American ace of the conflict.

On October 22, 1952, he was flying escort for some fighter-bombers; to screen them, he had to fly across the Yalu, right above the big Chinese air base at Antung. He immediately encountered four MiGs that turned and flew deeper into China. Staying with them anyway, Risner fired at extreme range at the tail-end Charlie and shattered his canopy glass. As the MiG pilot twisted and dodged, Risner caught his plane with another burst. Almost down on the deck, the Communist flier started a split-S, and to Risner's amazement pulled out of it in a dry river bed. Risner pursued through the MiG's jet wash and dust that it kicked up. Through more tortuous maneuvers, Risner could barely stay with the enemy plane. Risner himself described the chase in Eric Hammel's Aces in Combat, Volume 5:

"He was not in very good shape, but he was a great pilot - and he was fighting like a cornered rat!

He chopped the throttle and threw his speed brakes out. I coasted up, afraid that I'd overshoot him. I did a roll over the top of him, and when I came down on the other side, I was right on his wing tip. We were both at Idle with our speed brakes out, just coasting.

He looked over at me, raised his hand, and shook his fist. I thought 'This is like a movie. This can't be happening!' He had on a leather helmet and I could see the stitching in it."

Thr MiG then swung around and led Risner right into Tak Tung Kau airfield, 35 miles inside China. He zoomed down the airstrip, making 300 knots and with his landing gear up. Risner waited until the right moment and then hammered him, blasting off part of the wing; the MiG touched the ground and blew apart. It was Risner's sixth kill.

As Risner and his wingman, Lt. Joe Logan, were leaving the Chinese airfield, the flak caught Joe's fuel tank. Jet fuel and hydraulic fluid spewed out from the wounded Sabre. Robinson instantly decided to try an unprecedented and untried maneuver; he would push the crippled fighter with his, about 60 miles to the UN rescue base on the island of Cho Do. He radioed Joe to shut down his engine. He carefully inserted the nose of his F-86 into the exhaust of Logan's plane and tired to keep the two planes together. The turbulence kept bouncing and separating the two jets, but Risner was able to re-establish contact and guide the powerless plane out over the sea. Near Cho Do, Lt. Logan bailed out, after radioing to Risner, "I'll see you at the base tonight."

Risner stayed in radio contact with the rescue helicopter. Joe, a strong swimmer, landed close to shore, and the chopper tried to blow him in with the rotors. Tragically, Joe Logan didn't make it; he became tangled in his parachute lines and drowned.

Risner shot down two more MiGs, for a total of eight, before he left Korea in mid-1953.

Risner stayed in the Air Force, commanding fighter squadrons based in Germany and the United States. In April, 1965, flying combat over North Vietnam, he was shot down and rescued. But five months later, in September, his luck ran out and he was shot down a second time. This time the North Vietnamese captured him, and held him prisoner for over 7 years. He was re-patriated in February, 1973.

He told his moving, heroic story in The Passing of the Night: My Seven Years as a Prisoner of the North Vietnamese.

After his return the United States, he was promoted to Brigadier General. He retired from the Air Force in 1976. His awards and decorations include Air Force Cross, Silver Star, Distinguished Flying Cross, and Purple Heart.