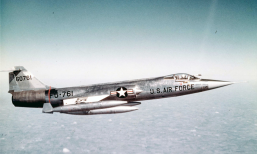 Iven Carl Kincheloe, Jr., was born in Detroit on 2 July 1928. As a boy, he loved to make and fly model airplanes and had decided upon a career in aeronautics by the time he entered high school. He started flying lessons at age fourteen, soloing as soon as the law permitted, age sixteen. He enrolled in Purdue University, Indiana, where he majored in aeronautical engineering and joined the ROTC.

In the summer of 1948, as an ROTC cadet, he had the chance to meet Chuck Yeager and sit in the cockpit of the Bell X-1.

He graduated in 1949 and enlisted in the U.S. Air Force. He was commissioned a second lieutenant and received his wings on 4 August 1950. He spent a year on the F-86E project, testing it at Edwards AFB where he continued to make his mark in the tightly-knit test pilot fraternity.

Upon arriving in South Korea in September 1951, Kincheloe was a first lieutenant. Mostly his unit (the 4th FIW) flew escort missions, protecting the B-29's and RF-80's from the MiG fighters. He flew sixteen missions before he even fired at an opponent.

Kincheloe was quickly recognized as a rare talent, and was transferred to the 25th Fighter-Interceptor Squadron, 51st Fighter-Interceptor Wing, flying F-86Es. This was the model he had tested back in the States; it offered better maneuverability with its all-flying tail and power-aided controls. His personal Sabre was named "Ivan" - unclear whether it referred to his own name (mis-spelled) or to the Russian MiGs he faced. He damaged a MiG-15 in his first combat, on 6 January 1952, and downed another MiG near Uilu on the 19th, when he led four F-86's in an attack against ten or more MiGs. He got one, his flight routed the rest, and he earned promotion to captain and a DFC for the mission. His luck then turned sour. In five consecutive fights from 25 January to 27 February he could claim no more than a damaged, while other 25th Squadron pilots were scoring several victories. (Presumably the 'damaged' was on Feb. 2, which some sources note as a confirmed kill.)

Then came April. On the 1st, Kincheloe was flight commander on an escort mission over Yongsansi. Sixteen MiGs attacked. In the dogfight, "Kinch" shot down the enemy leader, took some damage to his own plane, and then got a second MiG, a rare double. He bagged another the next day near Uiju, and made his fifth in the same locale on the 6th. He had destroyed four MiG-15s in six days - a rare achievement. With this mission, he became an ace and earned the Silver Star. In May, he finished his tour in Korea with 131 combat missions behind him, 101 in F-86's and 30 in F-80's.

For his first post-war assignment, he taught gunnery at Nellis AFB, but continually lobbied for coveted test-flight assignments. In January, 1954, he was accepted into an exchange program with the RAF, that got him into the highly regarded Empire Test Pilot's School at Farnborough. This training qualified him as a test pilot and he entered the USAF Fight Test Center in early 1955. He participated in testing the "Century" series aircraft: the F-100 Super Sabre, the F-101 VooDoo, the F-102 Delta Dart, the F-104 Starfighter, the F-105 Thunderchief, and the F-106 Delta Dagger.

In the mid-Fifties, the hottest, most sought after test assignments, the pinnacle of the test pilots' pyramid (as Tom Wolfe called it in The Right Stuff) was the X series of rocket-powered test planes. Following Bell's X-1, the swept-wing X-2 was far beyond its predecessor's capabilities. Constructed of stainless steel and K-Monel copper-nickel alloys, it had a larger rocket motor and was designed to explore atmospheric flight at much greater speeds and altitudes. When the X-2 project pilot, Lt. Col. Frank K. "Pete" Everest, chose Kincheloe as chase pilot, Kinch knew this was his oportunity. Before long, the X-2 program slowed down, and Everest was reassigned. Kincheloe and Captain Mel Apt were selected to continue the program and push the X-2's speed and altitude envelopes. Not long after Everest departed Edwards in June 1956, Kincheloe made two familiarization flights in the single-seat plane.

On Sept. 7, 1956, he rode the X-2 up to 126,000 feet, becoming the first human ever to fly above 100,000 feet. The public reaction to this feat was immense. Although that altitude was about half of what was later considered the edge of space, Kincheloe was immediately hailed as "The first of the spacemen" by a fascinated press and was awarded the Mackay Trophy. Three weeks later Mel Apt was killed in the X-2, minutes after becoming the first man to exceed Mach 3. That abruptly ended the X-2 program. There would be no more rocket plane research until the start of the hypersonic X-15, three years later.

Aerial Victories: 5 confirmed and 6 damaged (Some internet source credit him with ten; the appendix to Dorr's book shows nine. The USAF site and the AFAA show five. Given the inevitable "over-claiming" of fighter pilots, I try to show the lowest figure cited by the various credible sources. In Kincheloe's case, the USAF and the AFAA agree on five aerial victories.)

Medals: Silver Star, Distinguished Flying Cross with one OLC, and the Air Medal with 2 OLCs.