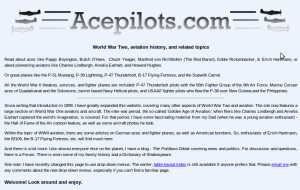 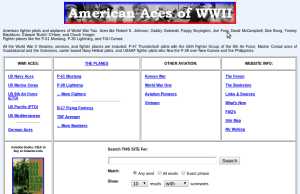 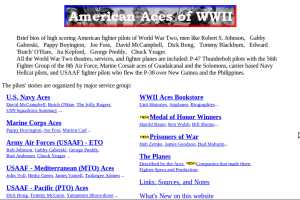 Optimized the Google ads, blending them in with the site

February, 2007 - Updated copyright dates, did miscellaneous maintenance, and added Amazon Omakase ads. The site is now getting about 20,000 visits per day.

October, 2003 - Began my blog, The Politburo Diktat, a satirical, faux-Commie look at news and politics

January 5, 2000 - expanded Tommy McGuire article. Number of visitors dropped to 100 per day over the holidays.

October 13-20 - split out many pilot pages, as the main pages were getting too big to load quickly. Also began offering books thru Amazon.com Associates program

October - about 90 visitors per day

August - about 50 visitors per day

July - expanded articles on the USMC fliers, based on reading The Cactus Air Force

June 16, 1999 - Launched website, originally a word document that I had created from surfing through many other websites

I started this website as a purely individual effort, "flying solo" if you will. But I have received so much help from so many people, that I would like to recognize them.

My wife, Elaine, for putting up with this, and all my other hobbies

My Dad, for his service in the US Navy in WW2 and for sharing with me his love of history

Joe Clark, who shared photos from his family's collection, seen on the Clark Gallery

Charlotte Maloney Davidson, who generously donated to this website her first edition of Robert Sherrod's History of Marine Corps Aviation in World War II, so that others could find out more about those men and those events

Bruce Gamble, author of a couple books on Pappy Boyington, who was equally generous. Thanks to Mr. Gamble, the site now has a lot on the famous Pappy Boyington.

Bob Goebel and Ham McWhorter, two aces featured on this site, who "made my day" by communicating with me

Eric Hammel, author of military history, who generously let me have a number of review copies of his books and a lot of his time and insight

Dan McAnarney, who provided me with a lot of good feedback on the Ed Shaw article.

Diego Zampini, who has added lots of good info on the Korean War and jet age aces: Russian, Vietnamese, and Americans.