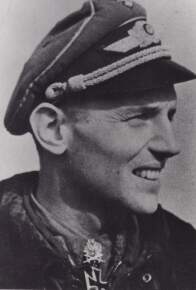 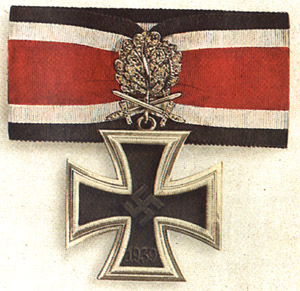 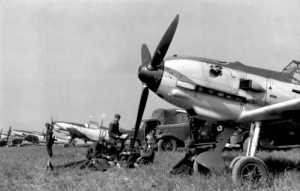 The highest scoring ace of all time was the great German Luftwaffe experte Erich Hartmann with 352 aerial kills. Flying Bf 109s (Me-109s) against the overmatched Soviet MiGs and Yaks for almost three years, he accumulated his unrivalled score. Hartmann claimed, that of all his accomplishments, he was proudest of the fact that he never lost a wingman.

He is also reputed to have said. "Get close .. when he fills the entire windscreen ... then you can't possibly miss."

Hartmann was born 19 April 1922, in Weissach, Wurttemberg. At age 19 (1941), he joined the Luftwaffe and was posted to Jagdgeschwader 52 (JG 52) on the Eastern Front in October, 1942. He scored his first kill in November, and only achieved his second three months later. In the first half of 1943, he worked out some of the tactics which would prove so successful later on. If he was attacked from behind, he would send his wingman down low and out in front. Then he would get behind the enemy and fire a short, quick accurate burst, waiting "until the enemy aircraft filled the windscreen." He would normally content himself with one victory; he was willing to wait for another day. His natural talents began to tell: excellent eyesight, lightning reflexes, an aggressive spirit, and an ability to stay cool while in combat.

As JG 52 retreated along with German ground forces in 1943, Hartmann's score began to mount. The great Kursk offensive, Operation Zitadelle, began on July 5. The Luftwaffe planned to screen the Wehrmacht's panzers from the Soviet Il-2 Sturmoviks, armored tank-busting aircraft, armed with twin 37mm cannon. Hartmann's Staffel 7 of JG 52 moved up to Ugrim, only 14 kilometers behind the front. As the Panther and Tiger tanks moved up, Junkers Ju.52 transports flew in supplies. On the morning of the 5th, four of Staffel 7's pilots did not return, apparently their compasses misled them, due to extraordinary iron ore deposits in the area. Hartmann was promoted to Staffelkapitan on the spot. The offensive ground forward slowly on the 6th and 7th; obviously the Russians had dug in and prepared defensive lines in depth.

On the morning of July 7, 1943, sun rose over Ugrim in the northern Ukraine about 3AM. Staffel 7's Me.109 G10's lay scattered around, in the deep grass of the Ugrim airfield. Hartmann's personal plane, decorated with a large Roman numeral 'I' and the name Usch in a red heart. (Usch Paetch was his fiancee, whom he wrote to daily.) In the comfortable summer weather, the pilots slept in tents. On waking, Hartmann dressed in a gray shirt, blue-gray trousers, and gray shoes. He washed up and shaved in a small stream and ate breakfast, two eggs, cooked by a couple of Russian girls. He and the other three pilots in his Schwarm were assigned to cover an F.W.189 on a dawn reconnaissance mission.

Erich joked with his crew chief, 'Bimel' Merten, and strapped himself into the cockpit. At 3:04, the recon plane started and Hartmann set Messerschmitt's flaps and checked the fuel while Merten cranked the starter. The DB 605's twelve cylinders coughed, belched smoke, and then caught smoothly. His three comrades followed him to the take-off spot. He gunned the engine while stomping on the brakes. When he released them, his 109 shot forward and quickly reached 160 km/hour. He gently pulled back on the stick and was airborne; the other three followed him closely. They all banked left as they went through post-take-off routines: retract landing gear, close radiator flaps, ease back on the throttle, and check gauges, guns, and gunsight.

They climbed to 1300 meters as they flew northeast and then swung southward, with the Fw 189 in view. The flight proceeded uneventfully and the recon plane headed for Ugrim. Hartmann's radio crackled with a report from Adler, the German forward spotting post; a group of ten to twenty Russian planes were headed west. Hartmann throttled up a bit, gained altitude, and turned his Schwarm toward the east without sighting anything for several minutes.

Soon enough, many large Il-2's came into view. With its armor and rear gunner, the Sturmovik was a tough target. With the Sturmoviks closing head-on, Hartmann unhesitatingly ordered an attack. He dived down below them, picking up airspeed, then banked around and came up behind and beneath them, aiming for his target's vulnerable ventral oil radiator. The Il-2's flew straight on.

Hartmann's Bf 109 roared along, doing over 400 MPH; Hartmann streaked into a Sturmovik's blind spot. At 200 yards, its wingspan filled his gunsight ring; still he closed in to 150, then 100 yards before firing. He briefly triggered his 20mm cannon and his two 12mm machine guns, for about one and a half seconds, before his speed carried him in front of them. As other Bf 109s struck their targets, Hartmann glanced back and saw blue flames and black sooty smoke streaming from the Sturmovik's radiator. His twenty-second victory of the war.

Under the deadly attack of the Messerschmitts, the formation of Russian airplanes began to break up. Having regained altitude, Hartmann again zoomed down below the tail of an Il-2. He checked his own rear and stabilized his aircraft. This Russian pilot, alerted to the danger, spotted him and turned sharply to evade. The young blond ace matched the turn and instantly estimated the lead needed for a deflection shot. At 150 meters, he opened fire, and his bullets tore into the side of the Russian tank-buster. More blue flame and black smoke poured from his twenty-third victim's oil radiator.

As the remaining scattered Russian planes fled eastward, Hartmann radioed his Staffel to return to Ugrim. About 4AM, as they approached the field, Hartmann waggled his wings twice, indicating his two victories. On landing, Mertem and other ground crew gathered around him, offering congratulations. Hartmann walked to the operations tent to file his Gefechtsbericht, his after-action report. Early reports from the Adler posts already showed more Russian air activity than on the 5th or 6th. Four pilots sat in their planes, ready to take-off in less than a minute. Hartmann soon fell asleep by his own machine. But only briefly.

By 5:50, he was back in the air, leading a flight of 109s on a frei chase, and he soon found more Il-2s, escorted by fighters. The Messerchmitts attacked successfully, with Hartmann downing another Il-2 and an LaGG-3 fighter. Within an hour, he was back on the ground, with four victories for the day.

Late that afternoon, he led the Staffel up again, to the northeast. They found a group of Soviet LaGG-3 fighters, which they engaged in a sprawling dogfight. It was over quickly and Hartmann had shot down three enemy fighters, making it seven for the day, his largest score so far.

He was awarded the Third Reich's highest regularly awarded military decoration: The Knight's Cross to the Iron Cross with Oak Leaves, Swords and Diamonds. With apologies to any German readers of this page, I must say that only the Germans could come up with a name like that: "Das Ritterkreuz zum Eisernen Kreuz mit Eichenlaub, Schwertern und Brillianten".

Near the end of WWII, in early May 1945, the Luftwaffe command ordered Major Hartmann, then Gruppenkommandeur of famous Jagdgeschwader 52, and his Commodore, Hermann Graf (another pilot, who had earned the "diamonds" to the Knight's Cross) to fly to the British sector. Both officers disregarded this order, because they felt responsible for Jagdgeschwader 52's pilots, ground crew, family members, and other civilians, who had joined the squadron, seeking protection against fierce aggression by the Czechs. The officers ordered the destruction of the unit's aircraft, and then the unit moved west in direction of territory already occupied by US troops. On May 8th, 1945, the soldiers and civilians surrendered to US troops in the region between Bavaria (German province) and Czech border. But on May 17th, the US Army delivered all of these German troops and civilians to the Red Army.

Like all others, Hartmann was then deported to Siberia, where he was sentenced to 50 years of hard labor. (Hartmann has since been rehabilitated by Russian justice, which declared those sentences illegal in 1995.) The Soviets pressured him to support a build-up of an East German air force and tried to turn him into an undercover agent against the West. Hartmann refused, even though the Soviets threatened to kidnap and kill his wife and daughter, living in West Germany. Hartmann did not return to Germany until 1955, when the last German POWs were released along with the establishing of diplomatic relations between West Germany and the Soviet Union. In 1956, Hartmann joined the newly established West German Luftwaffe and contributed to the build-up of new fighter units. In 1959, he became the first commodore of Jagdgeschwader 71 "Richthofen." Erich Hartmann died 20 September 1993.

The book, The Blond Knight of Germany by Raymond F. Toliver and Trevor J. Constable, is a very personalized biography of Hartmann. It was written in the 1970's, with Hartmann's cooperation.

Just one event that the authors recount was August 12, 1943. The Russians had broken through in a counterattack around Kursk. While Rudel's Stukas were "giving the Russian ground forces Hell," Hartmann led a flight of eight Messerchmitts to destroy the Sturmovik Il-2s, which were doing the same to the panzers. Hartmann shot down two of the tank-busters, before getting hit himself.

After coaxing his crippled Bf-109 westward, he belly-landed, and removed its precious clock, as required by standing orders. His first sight of a German truck led him to believe that he had reached the German lines. It turned out to be a captured vehicle being used by Russian infantry. He was quickly captured, and faked abdominal pains to buy himself some time and the opportunity to escape. When the chance came, he jumped out of a moving truck and plunged into a field of tall sunflower plants, bullets whining overhead. ... Click here to order 'The Blond Knight ...' from Amazon.com.

The top American ace of all time, the U.S. Ace of Aces was Richard Ira Bong. He shot down 40 Japanese planes in the Pacific.

Over the years, there's been a lot of ink spilled about the relative scores of German and American aces. 27 Americans shot down over 20 enemy planes. 15 Germans shot down over 200 planes, and more than 100 Luftwaffe experten downed at least 100 aircraft. Clearly, the German fighter pilots were not ten times better than their American counterparts.

In large part, the differences can be attributed to one man: Joseph Stalin, who approached all Russian military problems with one concept: more! More planes, more pilots, and when they got shot down, even more planes and more pilots. Poorly trained, flying mediocre aircraft, the brave Russian pilots didn't have much of a chance.

Also important is the type of air warfare that the Soviets waged. They focused on ground support, on the tank-killing Il-2 Sturmoviks. And they were very successful. But the Sturmoviks, while deadly against German tanks, were no match for Hartmann and other aces flying Bf 109s and Fw 190s.

During the First World War, the top ace was the German Baron Manfred von Richthofen, with 80 kills; he was the "The Red Baron." The top American was Captain Eddie Rickenbacker with 26 aerial victories.

Albert Magnus' comprehensive Air Aces Homepage lists all the fighter aces from the various conflicts that featured air warfare. The wars range from aerial dogfighting in WWI to the high tech missile kills of the Persian Gulf War. The U.S. WWII section consists of an alphabetical list of all 1200+ aces, which includes the service and group(s) that each ace served with.