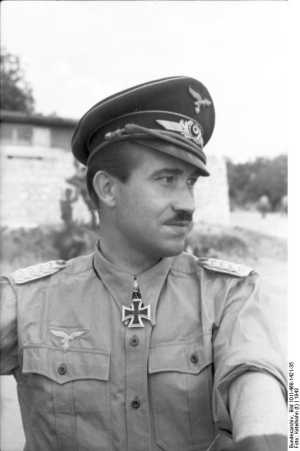 Galland in the field, wearing The Diamonds

Hermann Göring giving a speech at the funeral of Night fighter ace Lieutenant Colonel Helmut Lent, winner of the Knight's Cross to the Iron Cross with Oak Leaves, Swords, and Diamonds.

Knight's Cross to the Iron Cross with Oak Leaves, Swords, and Diamonds

Medals for valor seemed to proliferate during World War Two Germany. The Iron Cross, originally a Prussian award, dated back to 1813. After Germany was unified in 1870, the Iron Cross remained an important decoration for German war heroes.

Officers and men of all ranks within any branch of the Wehrmacht, Waffen-SS or the auxiliary service organizations.

Luftwaffe Qualifications:
- The previous award of the Knight's Cross with Oakleaves and Swords, and
- Continued accumulation of points, 1 point for downing a single-engine aircraft, 2 points for a twin-engine aircraft and 3 points for a four-engine aircraft. All points were x2 at night. This total was continuously raised as the war went on.

Kriegsmarine Qualifications:
- The previous award of the Knight's Cross with Oakleaves and Swords, and
- Continued accumulation of tons of shipping sunk for Uboots, and/or
- Continued performance of outstanding actions of combat bravery above and beyond the call of duty.

Knight's Cross of the Iron Cross with Golden Oakleaves, Swords and Diamonds

This medal was the highest level, originally intended for 12 of the most distinguished servicemen in the entire German armed forces after the war ended (victoriously, of course). As the Third Reich collapsed, this plan was never realized.

But one Golden Oakleaves, Swords and Diamonds was awarded to Hans Ulrich Rudel. The famed Stuka dive bomber pilot destroyed 518 Russian tanks, 150 artillery pieces, 700 trucks, one battleship, one cruiser, one destroyer, and hundreds of other targets (bridges, railways, bunkers). Rudel flew 2,530 combat missions, of which 400 were in a Focke-Wulf 190, claimed 11 air-to-air victories and was shot down 32 times.