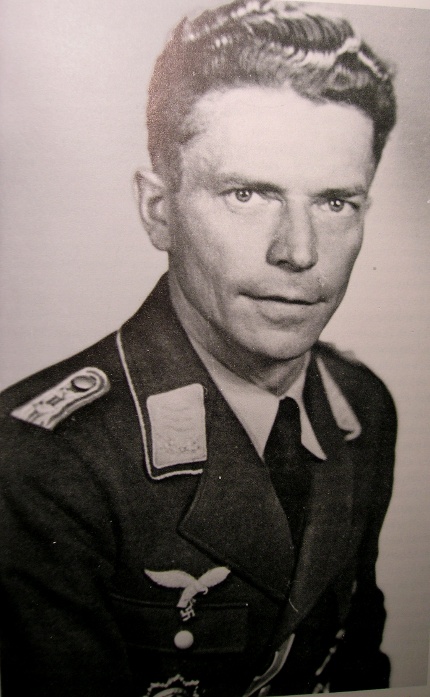 Many brave men on both sides performed skillfully and bravely, and not just on the battlefields and not just in aerial combat. One such man was Rudolf Opitz, a noted German test pilot, who,  as the vagaries  of history would have it, may be best known for something he did not do. From correspondence with his son Michael, it is clear that Rudolf Opitz did not make the first test flight of the Me 110, although many sources say so. Log books and other documentary evidence make it clear that that honor belonged to Dr. Hermann Wuster.

While Opitz's war time log book is "missing", all of his other logs, which include his activity on the alleged date of 12 May 1936 survive to this day. A Bf 110 flight is not there on that date. Opitz says that the Bf 110's designer and Messerschmitt's Chief Test Pilot, Dr. Wurster made the first flight. Two pages in Opitz's log book covering 12 May 1936 show that he was practicing spot landings in Darmstadt and Wiesbaden that day. A glider historian in Germany also has possession of the Dr. Wurster log books, which shows that Dr. Wurster made the initial Me 110 V1 test flight on flight #434 dated 12 May 1936. Take-off was at 18:45, and landing was at 18:55.

It is interesting that the logbook entry shows it as a Me 110, while there are other entries for the Bf 109 on the same page. It may seem odd that all the historians seem to call it a Bf 110, yet it was logged in Dr. Wurster's official log as an Me 110 already in 1936. Some modern experts are overly precise with these official designators, but Opitz and other German pilots used the Bf and Me designations interchangeably. Most used the "Me" because it is the latter designation, and also easier to pronounce. It is only one syllable when pronounced as "may". Bf is two syllables (which do not flow well together), therefore longer and harder to say. At that time, Opitz was a brand new power pilot. He had been a glider instructor already for several years, and due to his high placing in the 1935 Rhön glider championships was awarded a power conversion course as a prize.

He did not get involved in powered aircraft flight tests until 1937 and later. Opitz did fly the Bf 110 a fair amount. He used the Bf 110 (in support of his Me 163 flight testing) as a tow plane when the Me 163 was flown in the glider mode. Opitz also made some suggestions that were used to improve the handling of later Bf 110 models, but he didn't come to be around Lechfeld and the Messerschmitt factory until late in 1941, which was 5 years later than the original test flight of that aircraft.

He was a test pilot, not an ace. His one real combat mission was when on 10 May 1940 he participated in the surprise night glider attack on the Maginot line in Belgium. This was the opening salvo of the war in the west. He was one of the three original glider instructors to teach the first German military glider pilots how to fly at the DFS ("Deutsche Forschungsanstalt für Segelflug" or the "official" German Flight Research Institute for Gliders) in 1936-38.

After he was drafted in 1939, he became the Chief Instructor for all cargo glider operations. While he had been instructing the first military glider pilots at the DFS, he flew (as a second test pilot to Heini Dittmar) for Alexander Lippisch on a spare time basis. Lippisch had lost his only test pilot once due to an accident, and that loss had stalled his program. After that, Lippisch insisted on having two test pilots. In case one was killled, the other could carry on. In 1939, the Lippisch group was moved to larger facilities at the Messerschmitt factory. Dittmar went along. Opitz was drafted. This left Lippisch with only one test pilot again. Once Dittmar flew the Me 163a under rocket power (as opposed to just in the glider mode), the danger for a catastrophic accident became too high for Lippisch to bear with only one test pilot. After the second powered flight, Lippisch grounded the Me 163a until he got his second test pilot back. It took General Udet to pry the Combat Glider Corp's Chief Instructor away from the glider operation, as they did not want to release Opitz. This was in the fall of 1941. Opitz made the third powered flight of the Me 163a. Then, he towed Dittmar to altitude, and Dittmar proceded to light the motor and set a new world speed record of over 1000kph. As luck would have it, Dittmar injured his back, and Opitz wound up making the first powered Me 163b flight in 1943. Dittmar was the civilian factory Test Pilot, and Opitz was the military Chief Test Pilot.

Opitz also wound up injuring his back as well in 1943. On his return to flight status, he opted to be more operational as opposed to pure testing. From then until the end of the war, he was in the regular command structure, but also kept testing systems to get the fighter operational as quickly as possible. In this capacity, he did try to make one or two of the initial intercept attempts on allied aircraft. In doing this, he ran into compressibility and other issues that prevented these initial attempts from being successful. These "flight test" results dictated hardware and operational tactics changes. When later implemented, these changes resulted in successful attacks by other pilots.

There are longer bios of Rudolf Opitz here and here.

He was awarded the Iron Cross 1st and 2nd class for the glider raid on 10 May 1940. He was awarded the German Cross in Gold (DKG) for his flight test work on the Me 163. Notably, this was one of only two DKG's awarded for non combat operations. The first picture of Opitz is from Späte's book "Top Secret Bird," which Opitz himself called a "historical novel" as Späte assigned quotes from 40 years earlier out of memory. In the second picture, Opitz is wearing his DKG (German Cross in Gold). Note that it had a background similar to the Star of the Grand Cross of the Iron Cross, but instead of an Iron Cross on the front, it had a Swastika. This award's status was between the Iron Cross and the Knight's Cross, (It is also notably absent from the awards section of the web site, an error I must correct).

Rudolf's son, Michael Opitz, kindly furnished these details on his father's career, in particular correcting the record concerning the first flight of the Bf 110.