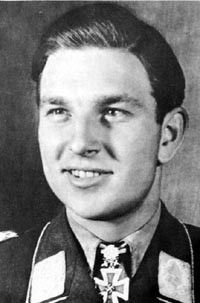 Medal: Knight's Cross to the Iron Cross
with Oak Leaves and Swords 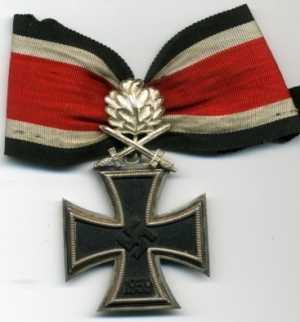 Second-highest scoring ace of all time

Gerhard Barkhorn scored 301 victories, achieved in 1,104 missions; all his victories were won on the Russian Front.

He was born on 20 May 1919 at Königsberg in East Prussia. In 1937, he joined the Luftwaffe, and began flight training in March 1938. After initial posting to 3./JG 2, Leutnant Barkhorn was transferred to 6./JG 52 on 1 August 1940. He flew his first missions during the Battle of Britain but did not shoot down any aircraft at this time. He was shot down over the Channel, and was rescued.

JG 52 transferred to the East just before Operation Barbarossa, and Barkhorn was soon flying ten sorties a day. Barkhorn achieved his first victory during his 120th mission on 2 July 1941 over the Eastern Front. Thereafter he was to score steadily, if relatively unspectacularly, in comparison to other Eastern Front Luftwaffe aces. On his best single mission he scored four victories, on his best day seven.

Highlights of Barkhorn's career include:

He claimed 24 victories in August, 1943, 15 in September, 23 in November, and 28 in December, including seven on 28 December (his best day of combat). His success did not come without cost. He was shot down many times (some source say 7, some 9), he bailed out once, and was wounded twice. On 31 May 1944, Barkhorn was flying his sixth mission of the day in Bf 109 G-6 (WNr 163195) 'Black 5,' when he was bounced by a Russian Airacobra and shot down. He received severe wounds to his right arm and leg which put him out of action for four months. He returned to combat duty at the end of October.

On 16 January 1945, Major Barkhorn was transferred to take command of JG 6 serving on Reichsverteidigung duties based at Posen. He led the unit until 10 April 1945 but was still suffering the effects of his wounds and eventually relinquished command for another spell in hospital. On recovery he joined JV 44. On 21 April 1945, flying an Me 262 jet fighter, an engine failed. He broke off his attack on some American bombers and returned to base at Riem. Pursued by the Mustang fighter escort he crash-landed his crippled machine in a clearing. The cockpit canopy, which he had opened to enable a quick escape, slammed shut on his neck. This put him back in hospital and out of the war.

After the war Barkhorn became a Generalleutnant in the Bundesluftwaffe. He retired in 1976. He died, with his wife Christl, in an automobile accident on 6 January 1983.

Aces of the Reich: The Making of a Luftwaffe Fighter Pilot, by Mike Spick, Greenhill Books, London, 2006