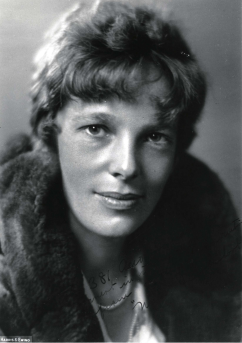 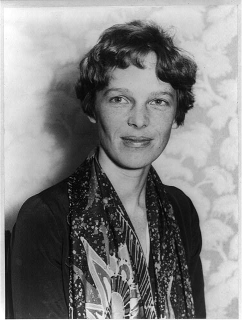 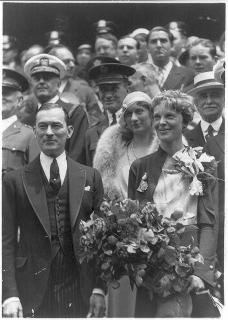 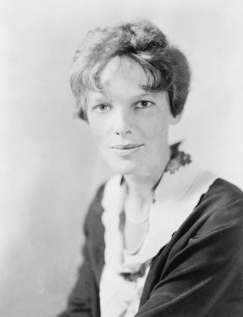 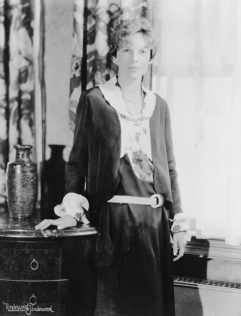 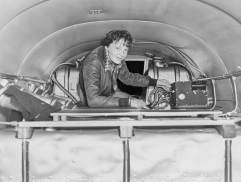 Aviatrix Lost Over the Pacific

The world's most famous female aviator disappeared in 1937, as she attempted to become the first woman to fly around the world. With her navigator, Fred Noonan, her Lockheed Electra was last heard from about 100 miles from the tiny Pacific atoll, Howland Island, on July 2, 1937. President Roosevelt authorized an immediate search; no trace was ever found; notwithstanding the endless efforts by conspiracy theorists to find evidence that she landed on an island.

Over the years, the disappearance of Amelia Earhart has spawned almost as many conspiracy theories as the Lindbergh Kidnapping and the Kennedy Assassination.

She achieved a number of aviation records:

Guided by her publicist and husband, George Putnam, she made headlines in the era when aviation gripped the public's imagination.

Amelia Earhart was born on July 24, 1897 in Kansas, the daughter of Edwin and Amy Earhart. At the age of three, she was sent to live with her grandmother (her namesake), mainly because the old woman needed company and a distraction from the deaths of her mother, her son, and her daughter-in-law, as well as the poor mental condition of her husband Alfred. The grandparents (or grandmother) raised Amelia during her early childhood. She liked their home in Atchison, Kansas, especially her large bedroom with views of the nearby river, now a museum open to the public. She enjoyed her life with her grandparents: learning to read at five, and secure in a place where it seemed that almost everyone was family. But her grandmother was timid, and a worrier, and did not approve of Amelia's tomboy tendencies, so Amelia kept her pony-riding, tree-climbing, snow-sledding, and hunting activities to herself. Her parents were only 50 miles away, and she summered with them, so she remained close to them during these years.

When she was seven, her father Edwin took the family to the St. Louis World's Fair, where, on riding the Ferris wheel, she learned that she rather enjoyed heights. She learned to build and make things with her own hands, once making a crude roller coaster out of two-by-fours, a packing box, and roller-skate wheels. She was an avid reader, and even as a child read Harper's Magazine for Young People, and the novels of Dickens and Thackeray. One of her favorite poems was "Atalanta in Calydon" by Algernon Charles Swinburne; it's a poem about a warrior maiden, who hunts and kills a boar with Meleager.

From the first grade, she attended the College Preparatory School in Atchison. It was a tiny place, with only about 30 students, housed in a building that used to be a stable. Amelia was bright, but her independent spirit and lack of interest in recitation did not endear her to the teachers. In high school, cheerleading was not enough for her, she wanted to play on the basketball team.

Like Pappy Boyington, her family circumstances were unsettled, marked by moves and alcoholism in the family. The odd family arrangement (Amelia living with her grandparents in Atchison, her younger sister Muriel with the girls' parents in Kansas City) lasted until Amelia was ten, when she rejoined with her mother and father.

Her father Edwin, was well-educated, but tended to the impractical; money just slipped through his fingers. His in-laws, the Otises, helped him out a lot (including taking care of Amelia), but Edwin's extravagance remained a problem. In 1908, he got a new job, with the Rock Island railroad, which required him to move to Des Moines. Now, the arrangement with the Atchison grandparents was no longer feasible, so Amelia joined them in Iowa, and saw her first airplane, at the 1908 Iowa State Fair. For a few years, Edwin did well, moving into a newer, larger houses almost every year, as his income grew. But his spendthrift nature won out, and he kept living beyond his means, and increasingly turning to alcohol. He moved out for a time, but Amy (Amelia's mother) implored him to return.

The death of Amelia's grandparents, the Otises, was the final blow. The Otises were quite wealthy, with an estate worth over $170,000 (a huge sum in those days). While the will sought to provide for the grandchildren, it excluded Edwin and Amy. A lengthy, messy struggle ensued. During this time, Edwin had lost his job, and was forced to accept a menial position in St. Paul, which required another family move, to Minnesota.

In the 1913-14 school year, at St. Paul Central High School, where Amelia was more in control of her own destiny, she did very well, keeping a grade point average in the high eighties, with a curriculum including Latin, German, and Physics.

In 1916, she matriculated at Ogontz, a highly-regarded women's college, what used to be called a "finishing school," outside of Philadelphia. In her three semesters there, Amelia played field hockey, studied Shakespeare & Latin, and attended concerts of the Philadelphia Symphony. When the United States entered World War One in 1917, Amelia was drawn in and served as a nurse with the Volunteer Aid Detachment (VAD) of St. John Ambulance Brigade.

She took her first ride in an airplane in 1920. After her flight with barnstormer Frank Hawks, she said "As soon as we left the ground, I knew I myself had to fly." Indeed, within a few days, she took her first flying lesson, in a Curtiss JN-4 Jenny. Six months later, she bought her own airplane, a yellow Kinner Airster, that she dubbed "The Canary." Like Gabby Gabreski, she was not a naturally gifted pilot, but she persevered, built up her flying time, and even broke the woman's altitude record in 1922.

The mid-Twenties were difficult years for Amelia. Her mother finally divorced Edwin, thus ending that part of Amelia's family life. She studied at Columbia for a time, but lack of money compelled her to withdraw. She had a long-term engagement to one Sam Chapmen, but they never married. She was active in aviation and social work, living in Medford, Massachusetts for a time. She flew whenever she could, distributing free passes to a carnival on one occasion, and was active in Boston aviation circles.

She became the first woman to fly across the Atlantic on June 18-19, 1928. The flight was the brainchild of Amy Guest, a wealthy, aristocratic American expatriate living in London. Aware of the huge publicity that would accrue to the first woman to fly the Atlantic, the 55 year old Mrs. Guest had purchased a Fokker F7 trimotor from Commander Richard Byrd, to make the flight herself. Her family objected, and she relented, as long as the "right sort" of woman could make the flight. The "right sort" would take a good picture, be well-educated, and not be a publicity-seeking gold-digger. The Guest family hired George Putnam, a New York publicist who had promoted Lindbergh's book We, to look for a suitable women pilot. He selected the little-known Amelia Earhart, and introduced her as "Lady Lindy".

While the flight instantly made her world-famous, she was little more than a passenger in the Fokker tri-motor "Friendship." They took off from Trepassy, Newfoundland, and after a 20 hour and 40 minute flight, landed in Burry Port, Wales. When they went on to London, another huge mob welcomed them. The pilots, Wilmer Stutz and Louis Gordon, were all but forgotten in the media frenzy surrounding the first woman to fly across the Atlantic.

Amelia Earhart was a photographer and publicist's dream. Not only did she fly airplanes and break aviation records, she looked good doing so. She seemed to be both beautiful and down-to-earth, the type of good looks that might let her be called "America's Sweetheart." Shown on the left are a small sample of the countless photographs taken of Amelia Earhart in the 1920s and 1930s. Apparently she posed willingly for all of them: studio portraits, glamour shots. head shots, full-length pictures, in and around various airplanes, with numerous celebrities and politicians, etc.

The first photo, taken about 1930, is a classic glamour shot of the era: a three-quarter view, dressed with a fur collar, soft focus, and complimentary lighting. You can see a faint inscription in the lower part of the picture.

By comparison, the second one is less contrived, and probably a more accurate picture of Amelia, as you might see her on the street.

I love the one of her (holding a bouquet of flowers) and New York City Mayor Jimmy Walker, the third photo. He was a character himself, and he looks every bit the part of the glad-handling, smooth-talking, but corrupt, Irish politician that he was.

Fourth and fifth are two more formal portraits. Note the desk and vase that she is standing next to in the fifth one.

The sixth picture shows Amelia Earhart checking the airplane's equipment before her first flight across the Atlantic in 1928.

Continue reading about Amelia the Aviator