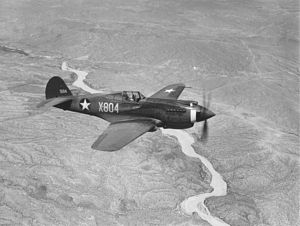 Ace of the Flying Tigers and 23rd Fighter Group

Charles Herman (Chuck) Older, born on 29 September 1917 in Hanford, California, graduated from the University of California in 1939 with a degree in political science. Joining the U.S. Marine Corps for flight training, he received his wings and commission at Pensacola on 1 April 1940 and was assigned to VMF-I. In July 1941 he resigned his reserve commission to join Chennault's American Volunteer Group (AVG), then forming in Burma.

Assigned to the 3rd Pursuit Squadron ("Hell's Angels"), Older participated in the first massive air battles over Rangoon, Burma and became one of the first two AVG aces on Christmas Day, 1941 when he added three Japanese aircraft to two destroyed on 23 December.

Credited with five more victories by the time the "Flying Tigers" were disbanded on 4 July 1942, he returned to the United States and joined the US Army Air Force.

Returning to China as a major in 1944, Older became group operations officer and deputy commander of the 23rd Fighter Group flying P-51 s. He scored his first victory with the group on 28 July, downing an Oscar over Yochow. Promoted to lieutenant colonel, he shot down another Oscar on 18 December and destroyed two Oscars and a Lily bomber the following day. He finished his scoring on 17 January 1945 with another triple - a Sonia, a Betty and a Tess northeast of Tachang. He also led the initial strike on Shanghai with 16 P-51s in January, resulting in 72 Japanese aircraft destroyed on the ground and five in the air.

Leaving the Air Force after the war, Older obtained a law degree from the University of Southern California and subsequently became a superior court judge in Los Angeles, California. He gained prominence as the presiding judge in the Charles Manson mass murder trial in 1970-71.